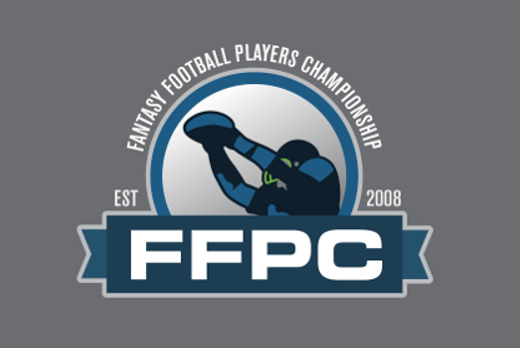 Bragging right and reputations are on the line, folks.

Five Draft Sharks staffers -- Pappano, Smola, English, Schauf and Phelps -- are squaring off against 7 Draft Sharks Insiders in a Fantasy Football Players Championship Draft Experts league. It's a 28-round best-ball format with the usual FFPC starting lineups and scoring rules.

You can follow along with the draft board. And keep coming back for round-by-round analysis.

Round 1 Analysis: No major surprises here. The top 5 was status quo. Pappano went and got his guy, taking Freeman 4 spots ahead of ADP. Ditto for Tavss, who scooped up Thomas 3 spots earlier than his average price.

I opened with Gronk, who has the potential to lead all non-QBs in FFPC points. As it stands, we project him behind only 8 guys.

Round 2 analysis: Including Gronk at 1.12, 4 TEs were selected in a span of 11 picks. TEs are juiced up in this format with 1.5 PPR. And there's a clear drop-off after these top 4 (although Jimmy Graham might have a bone to pick with that).

Pappano took the plunge on Elliott. It's easier to find fill-ins for his suspension with these deep, 28-man rosters.

Two teams started RB-RB: Phelps (Bell and Howard) and Pappano (Freeman and Elliott). And 2 have started WR-WR: Silver (Beckham and Bryant) and Tavss (Thomas and Cooper).

Round 3 analysis: Phelps continues to gobble up the workhorse RBs, opening the draft with Bell, Howard and Miller. He dug into best-ball lineup construction and found that a RB-heavy start is optimal.

Silver nabbed his 1st RB in McCaffrey, whose ADP is on the rise. Leonard Fournette ended up being the 3rd rookie RB off the board here, also following Cook at 3.05. Mixon rounded out the quartet at 3.10.

Pappano followed his Freeman-Elliott start with Graham, who has a shot to outscore the TEs taken in Round 2.

I don't believe Montgomery would have made it to me at 3.12 if this draft took place last week, before his "soft-tissue" injury. I have some concern but think Green Bay's lead back is worth the risk at this point.

Round 4 analysis: This is the 1st time all draft season that I've even considered Hopkins. I think he makes sense here, 8 spots later than ADP and as the 15th WR off the board.

Reingold ended the game of QB chicken with Rodgers at 4.05. Brady went 5 picks later to Schauf, who has a Patriots stack with Brandin Cooks. Schauf is also the only team without a RB through 4 rounds.

Weiser, Pappano and Phelps all nabbed their 1st WRs here.

Round 5 analysis: You know it's a DS draft when Powell goes at 5.01. It's a reach according to ADP -- but not based on the MVP Board. And there's no way he was getting back to Cookson at the end of the 6th.

Schauf starts his RB corps with Danny Woodhead, who has 60+ catch upside in Baltimore.

Silver surprisingly made Bennett the 6th TE off the board. He's TE10 in ADP.

Pappano has been the biggest Bryant backer at DS headquarters and put his money where his mouth is here. The Steeler is a nice upside play after going relatively safe with Golden Tate back in Round 4.

Tavvs, English and Cookson added their TE1s in this round with Walker, Ebron and Doyle. Phelps is the only team still without a TE.

Schauf continues to hog all the Patriots, adding Julian Edelman to Tom Brady and Brandin Cooks.

Round 7 analysis: Cookson made Mariota the 5th QB off the board at 7.01. Ryan followed as QB6. And Wisner rolled the dice on Luck late in the round.

Schauf is asking for a lot from Henry as his RB2. We'll see what else he adds to the position.

Round 8 analysis: We don't talk enough about drafting teams that "fit" together. Take my last 2 picks, for example: Frank Gore and Kareem Hunt. Gore's the steady veteran; the floor play. Hunt's the exciting upside play. They complement each other well.

Two more teams added their QB1s in this round, leaving English, Pappano, Weiser and myself as the last 4 teams without a QB.

Round 9 analysis: Phelps gets his TE1 with Fleener. English, Pappano, Weiser and I all get our QB1s. Every team has at least 1 TE and 1 QB now.

Schauf, meanwhile, keeps drafting Patriots. It's an interesting strategy to load up on 1 of the best offenses in the league. It should raise his weekly floor. But I wonder if it caps his team's ceiling. There are only so many TDs to go around in New England.

Pappano had a shot here to pair McFadden with Ezekiel Elliott but passed. Tavss gets him instead as his RB4 behind, notably, Doug Martin and his 3-game suspension.

1. With 22 picks before my next turn, I have no idea what will be left at the position when it gets back to me.

2. I like how Roethlisberger and Dalton's schedules fit -- particularly Dalton's matchups when Big Ben is on the road.

3. With 2 solid QBs locked up, I can ignore the position for a while and load up elsewhere.

Tavss, English and Silver also grabbed their QB2s in the 10th round.

Wondering where you'll need to grab the ascending Burkhead? He went in the mid-10th here.

Round 11: Four more QBs came off the board here, bringing the total to 12 over the past 3 rounds. We see this happen a lot in these best-ball leagues. It's important to not wait too long at the position and make sure you lock up at least 2 reliable starters.

Update: My, how far Eddie Lacy has fallen! Schauf got him here as the 49th RB off the board -- and behind Chris Carson!

Tavss was the lucky team to scoop up Hogan right after the Julian Edelman injury. His ADP is already up into the 9th round.

Round 13 analysis: Some more strong value in this round. Rodgers will start for the first 3 games of the season, while Rawls and Forte could open the year as their teams' lead backs. C.J. Prosise and Shane Vereen should catch a bunch of balls.

Round 14 analysis: The 1st DST comes off the board here. (Weiser must be a Pats fan.)

Pappano was pissed that I stole his homeboy Evan Engram, so he sniped my Ty Montgomery handcuff.

Phelps nabbed White a couple of hours after Cameron Meredith's season-ending knee injury. White's ADP is already up to the early 13th.

Round 15 analysis: After being the last team to take his 1st TE, Phelps becomes the 1st time with 4. His quartet: Coby Fleener, Cameron Brate, Julius Thomas, Dwayne Allen.

Schauf, meanwhile, becomes the last team to grab a QB, pairing Bortles with Tom Brady. Bortles has finished as a top 10 QB in FFPC points in both of the last 2 seasons.