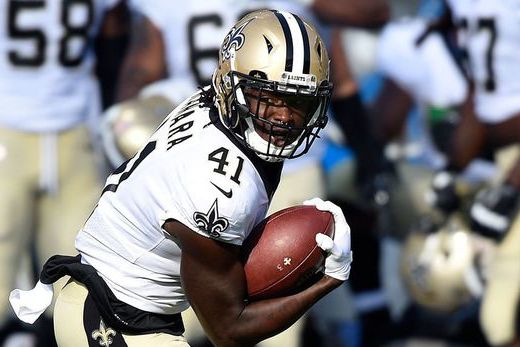 A lot of the drafting we do around here is for 12-team leagues. So we wanted to take this opportunity to pass along a 10-team “expert” draft.

FootballGuys.com pulled this group together to draft last week under PlayDraft lineup and scoring rules. That means a lineup of:

No kickers or defenses. Scoring is 0.5 PPR, 25 passing yards per point and 4-point passing TDs. The rest of the categories are fairly standard, and this league will play out best-ball style.

That likely pushed QBs even further down the board, and the format emphasizes upside over floor.

Here was the draft order:

Now let’s get to the part you care about ...

Nothing surprising in the opening round. The half-PPR and best-ball combo will likely just about always push the 2nd WR outside of the top 10 picks. The best-ball format only made it easier for me to start with high-ceiling Kamara at 7.

Hopkins as the 4th WR was a bit more surprising, but only because it doesn’t often happen. I can’t argue that he’s in a better week-to-week situation than Beckham and Thomas. Cook going to spot before my pick made my selection easier.

The 10-team alignment makes it easier to like Gronkowski as well. You get the advantage at TE without sacrificing as much at the other positions that you’re passing on for a round to get him.

As my turn approached, I was waiting to click on Mixon. After he left the board, I could have gone Thielen or Cooper. If I don’t take Gronk in these drafts, the RB-WR split among my 1st 5 picks depends on who reaches me at each turn.

I’d have been less inclined to take Ingram here if I hadn’t drafted Kamara in Round 1. But stacking them gives me New Orleans’ goal-line back every week of the year. The lack of a definitive goal-line back hurts the value of the players in most cases. But the Saints have ranked top 12 in scoring all 12 years since HC Sean Payton arrived, top 9 in 9 of those (including each of the past 4).

If I had to set weekly lineups in this league, however, I’d have passed on Ingram and likely opted for Baldwin or Fitzgerald.

Plenty of RBs still on the board at this stage (compared with Round 4). I still would rather have gotten Mixon in Round 3 as my 2nd RB, but I wouldn’t go back and force another RB into that spot since I missed him.

At this turn, it’s Ajayi vs. Lewis. The half-PPR scoring and best-ball format help Ajayi. I believe he has the potential to frustrate in a somewhat crowded backfield. But I also believe he’ll produce some big weeks in a top offense.

If I hadn’t taken a 3rd RB the previous round, I’d have been happy with Freeman in the 6th. The WR options looked good, too, though. I’d have been comfy with any among Jeffery, Smith-Schuster and Robinson as my 3rd wideout.

Burkhead makes sense here given the format, but I think it’s too early for him in a league where you’re setting weekly lineups. The New England RB certainly carries upside into this range, especially if Sony Michel’s fumble issues persist and infuriate Bill Belichick (as they always do). But I’d rather be in the receiver market here and still land a lead RB like I did the next round.

You don’t have to like Lynch or the Raiders to think he’s a value at RB33. Oakland gave him just 10.3 carries per game through Week 8 last season. Then Lynch averaged 16.9 per game from Week 9 on. Over that latter span, he ranked 11th in non-PPR scoring and 13th in PPR -- for an offense that finished 23rd in scoring and 17th in yards.

Unless you believe Doug Martin’s finally ready to bounce back from 2 straight crappy years and 4 down seasons among the past 5, Lynch should be in for more work like he enjoyed the 2nd half of last year.

All that said, likely would have taken Olsen had he reached my turn in Round 7. He does lose some appeal without full PPR scoring, however.

When Hogan went down with a shoulder injury in Week 8 last season, he sat 8th among all WRs in non-PPR points, 10th in PPR scoring and 1 red-zone target ahead of Rob Gronkowski for the team lead. Regardless of where Julian Edelman’s targets go the 1st 4 weeks, Hogan’s well worth a selection at this stage.

I considered Newton in Round 8, but I expected Drew Brees to get to me in Round 9 after seeing only 3 QBs leave the board before my 8.04 turn. Of course, I was also OK with not landing Brees -- otherwise I’d have gone ahead and grabbed him in Round 8 (where he and Newton are fine values).

This was a tough one: stack the top 2 Patriots wideouts like I did with Saints RBs and chase their top scorer at that position each week -- or stop the slide of their QB? I opted for Edelman and almost got lucky after the turn. If Edelman had gone before this pick, I’d have taken Brady.

When QBs slide even further than expected, it certainly makes it possible to wait even longer and still get quality. But it also adds value to going QB earlier than you might have planned.

As my opponent at 10.03 lingered on the clock, I grew sure I’d land Brady at this turn. If I had my Round 9 decision to make again, I'd probably go Brady there and see if Edelman gets back to me. But I'm certainly not heartbroken to instead lock up his top 2 WRs.

With Brady gone, Wentz or Luck would have been OK here. But I also don’t think they present clear separation from the next group of passers taken here. So I thought it a good time for the risk/reward of Reed. We already know he presents top-3 upside when healthy.

Sure, Duke Johnson loses some luster when it’s not full-PPR. But he’s also the 42nd RB off the board here -- 3rd among Browns. Even in non-PPR, he has finished 19th, 39th and 37th in his 3 seasons.

Guess not. I considered stacking Cousins with my 3rd-round pick of Thielen here but decided against it. Although I -- and we at DS, collectively -- believe that Thielen will lead Minnesota in targets again, I don’t expect him to be a dominant #1 WR for them. If he and Stefon Diggs both make it through 16 games, I think their shares will wind up within a few percentage points of each other. And I think Diggs leading in targets lies within the range of possible outcomes. Just as importantly, I don’t think Cousins represents an advantage here over the other QBs left.

That said, I think I reached a bit on Doyle after seeing how TE drafting went after he left the board. I wanted a dependable TE2 after starting with Reed and am not kicking myself for the selection. If I had a chance to do it over today, though, I’d have gone for Mahomes or Philip Rivers in this round.

I hoped the QB slide would allow Rivers to get to me here. I think he’ll provide a higher weekly ceiling than Smith this season. Washington’s new QB is fine for my purposes here, though -- especially paired with Reed in the double-digit rounds.

I want Packers RBs in best-ball drafts. The backfield could prove frustratingly muddled in lineup-setting formats, but the group will score some fantasy points. Only 6 teams generated more top-8 RB weeks than Green Bay did last year.

Regardless of format, Montgomery easily presents the group’s biggest draft value right now. He slipped past ADP in this draft. But even in MFL10s just since the start of training camp, you can still get Montgomery roughly 2 rounds after Aaron Jones leaves the board.

Doctson’s upside is easy to chase in a WR6 slot, even if you didn’t draft his QB 2 rounds earlier. The fact that I did pocket Smith made the selection even easier.

Earlier in this round, I think Hurst got way over-drafted. I wouldn’t take him at all in this 10-team draft. But even if you favor his outlook, TE17 is a lofty position. Both Bucs TEs, Charles Clay, Austin Hooper and Ben Watson rank among those still on the board at the position.

If I didn’t already have injury maven Reed, I likely would have taken a shot at Eifert’s upside in this round. (I strongly considered it even with Reed on board.) But I will never complain about landing Gallup as my 7th wideout. The rookie has already earned some 1st-team run.

I was glad to get McDonald as my 3rd TE. Now I’ll just keep my fingers crossed that his foot injury from a few days later proves minor.

I’ll also take this opportunity to remind you that Bortles finished 13th, 9th and 4th among fantasy QBs over the past 3 years. Even in his 13-start rookie season, he checked in 24th -- which is where he fell among QBs in this draft. And as you can see, Manning and Dalton still followed him off the board. This QB tier is a reason you can wait as long as you want, even when the whole league is waiting on QBs.

I went in with a plan for 2 QBs, 3 TEs and then splitting the other 13 picks between RB and WR. The Ingram selection helped motivate me to draft a 6th RB -- given that he’ll miss 4 weeks -- but so did Montgomery lingering on the board. Had I started with 3 RBs among the 1st 4 rounds, I might have spent that swing pick at WR instead.

See anything you’d do differently? 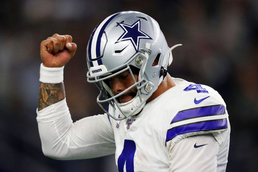