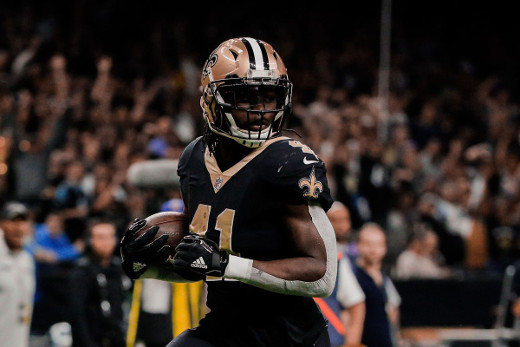 Head here for the full draft board. Below, I’ll share some round-by-round thoughts on Team Draft Sharks…

We project Kamara to lead his position in catches and reach double-digit TDs. In a full PPR setup, this was a fairly easy call.

Of course, you could also make an argument for Saquon Barkley, who disgracefully fell to 2.01 (RB10).

Why? I have no clue…

You already know we’re high on the 2nd-year Bengal. At RB12, he arrives 1 spot behind the DS rank. And he’s already flashing in preseason action.

Andrew Luck has remained setback-free and reached a milestone by playing in Week 1 of the preseason. After that one, he remarked that the deep passing game will be a “big part” of the offense.

Hilton’s the downfield centerpiece for a unit that’s extremely thin at WR. He’s reached 15.9 yards per catch in 5 of 6 NFL seasons. Consider him a fringe WR1 and a fine addition if you attack RB early.

I hoped for Amari Cooper here, but that always seemed like a long-shot.

So I’ll lock up an early-down workhorse in Collins. He entered camp with the potential of losing some work to Kenneth Dixon, but that now seems unlikely. Dixon’s missed practice time with a hamstring injury, while beat reporter Jeff Zrebiec even floated the possibility of Dixon getting cut.

Even if he’s a Week 1 Raven, a healthy Collins should reach our 241-carry projection.

Mix in Jordan Matthews’ recent release, and it’s no wonder why Hogan’s ADP is rising. He’s not a huge value here, but I’ll take a top target in New England’s offense. WR1 totals over the first 4 weeks are certainly within his range of outcomes.

But so what? With injuries common at the position, I’ll gladly take a major value here. After all, Miller’s ADP currently resides in late Round 4. And I got him here at RB34 vs. RB22 DS rank and ADP.

He’s dropped roughly 8 pounds with the goal of getting some of the explosion back from his Dolphin days. Miller should also see lead-back volume — at least early on — with D’Onta Foreman returning from an Achilles tear.

I'll admit: Cobb’s durability is a bit shaky. He underwent an ankle procedure in June and has been a limited participant in camp. If the Packers can keep him in bubble wrap before the real games start, though, it’s easy to see his appeal.

With Aaron Rodgers back, Cobb projects as the #2 target behind Davante Adams. Big plays will be sporadic, but a healthy Cobb should at least reach low-end PPR WR3 status.

Normally, I’d wait another round or 2 before grabbing a QB. But the value on Brees here is simply too good to pass up.

We like the additions of Cameron Meredith and Tre’Quan Smith. And the early-season suspension to Mark Ingram should put more on Brees’ plate. The 2017 Saints were uncharacteristically run-heavy, leading to Brees’ 2nd fewest pass attempts (536) while in New Orleans. He’s also a great bet to improve on what was his lowest TD rate (4.3%) since he matched that mark in 2007.

It might not be pretty, but volume and red zone appeal are clear marks in Benjamin’s favor. The Bills’ August addition of Corey Coleman — and his legit chances of starting — really highlights their lack of depth.

Benjamin started the preseason hot, too, snagging 4 of 4 targets for 59 yards and 1 score.

His season-long target upside extends into the 120s. In the 9th round, that's huge.

If I don’t land Rob Gronkowski early, I’m likely waiting until this range (or later) to address TE.

We know about Reed’s risk/reward outlook, but the ability to back him up with another TE1 candidate makes him viable in Round 10.

Here’s my backup plan/co-TE1, which looked much better before the Niners’ first preseason game. Kittle, of course, walked away from that one with a separated shoulder.

After picking up a variety of injuries as a rookie, durability is now a real concern for Kittle. The good news is that he should return for Week 1.

Godwin averaged 15.4 yards per carry, caught 63% of his targets and averaged a rock solid 9.7 yards per target as a rook.

Beyond volume, Jameis Winston’s early-season suspension surely hurts. But I’m not counting on Godwin as a weekly starter. I’ll bet on talent here and anticipate some mid- to late-season contributions.

Now here’s a pick that looks better after preseason action…

Marlon Mack’s hamstring injury puts Wilkins in line for more work. Even before that, Wilkins' well-rounded skill set and strong camp put him in the mix for touches right out of the gate.

The Colts upgraded their O-line over the spring. And if Mack happened to miss regular season action, Wilkins would almost certainly assume goal line duties ahead of pint-sized rookie Nyheim Hines.

A 2016 first round pick, Doctson enters a potential make-or-break campaign. But if he’s able to stay healthy, there’s clear potential for him to pace Washington in red zone targets. Doctson goes 6’2, 202 pounds and boasts a 41-inch vertical. Plus, he notched 6 scores last year on only 35 grabs.

I’ll be streaming defenses throughout the year. But I’ll fish for a big Week 1 performance from the Ravens at home against Buffalo, who’s breaking in a new QB (Nate Peterman, A.J. McCarron or Josh Allen) and a new OC (Brian Daboll).

Washington appears locked into Pittsburgh’s WR3 role. Loaded with talent and built like a RB, this Round 2 pick would see a major value boost if an injury forces Antonio Brown or JuJu Smith-Schuster to miss time.

I don’t expect to use Carr much this year. But now that he’s healthy, I’m optimistic that he’ll rebound from a poor 2017. A decent Week 6 matchup (Brees’ bye) at home vs. Seattle helps, too.