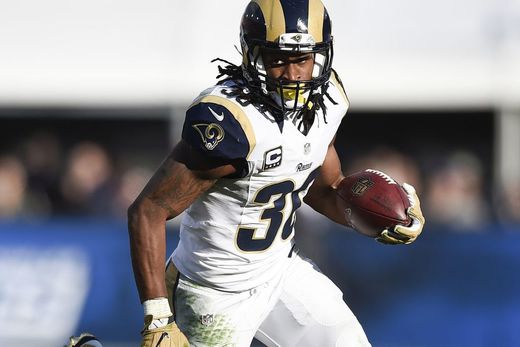 It’s way too early for a meaningful 2018 fantasy football mock draft, but there’s still a clear message below that you should expect to last …

The RB rebound of 2016 pushed David Johnson, Le’Veon Bell and Ezekiel Elliott to the top of 2017 draft boards. That only looks like it’ll intensify in 2018.

RBs claimed 6 of the top 8 spots in this mock draft I did last Thursday night with some fellow fantasy pros. And even that wasn’t enough for some of the reactors on Twitter, who were APPALLED that DeAndre Hopkins could leave the board ahead of Elliott and Johnson.

To me, the continuing shift back toward RBs looks like it’ll set up WRs as the strong early-round targets in 2018 drafts. We’ll dig much further into strategy and such in the coming months, but let’s take a quick look at the final top 12 RBs in PPR for 2017:

There’s obviously a lot more to the discussion, but I’ll stop there for now and give the specs of our draft: PPR scoring with a QB, 2 RBs, 3 WRs, TE, Flex and D/ST (no kicker.

And here’s the crew I drafted with (in order), assembled by the Sirius XM Fantasy folks (with links to their Twitter handles):

I’ve marked rookies with a single asterisk (*) and potential free agents with a double (**), adding “restricted” for the free agents who won’t be truly free. I also bolded my picks, because I'm special.

Let us know in the comments section below at which point you think each drafter tipped over into drunkenness.

I don’t see any real surprises here. Gordon’s the only guy I don’t like in Round 1. If nothing changes with the Chargers’ backfield personnel, then it’ll be tough to project Gordon outside of this range (like last year). But I think it’d be a bad move for the team to leave its RB depth chart untouched.

Through 2 rounds, we’ve seen 15 RBs and 8 WRs drafted. That’s 5 more RBs than were going in MyFantasyLeague.com public drafts as of mid-August last year -- a best-ball format that has favored leaning RB early. You had to grab Jones, Evans and Green in Round 1 if you wanted them in 2017 -- Jones and Evans usually by the middle of the round.

Seeing Barkley go 1st among 2018 rookies comes as no surprise. We’ll see where he lands in the NFL Draft, but I wouldn’t be surprised to see a 1st-round fantasy ADP on him by August -- especially after the big year of rookie RBs we just witnessed.

This round was why I didn’t feel like I had to go RB with either of my 1st 2 picks. I’m not sure what to make of Drake yet. But McCoy looks like he still has a year left. Henry’s sure to climb just off Saturday’s performance against the Chiefs (and further once DeMarco Murray officially steps aside). Mixon and Ajayi could easily finish top 10 among fantasy RBs next season.

Two more rookie RBs in this round. Get ready. It looks like an exciting class.

I though hard at 4.04 about a RB I wound up missing in Round 5. At the moment, I’m willing to take a shot at this point that Bryant ain’t done -- especially as my 3rd WR behind Odell Beckham and Julio Jones.

Oh, and Watson? We’ll see where he settles in. I will say that the 1st 2018 best-ball draft I did on PlayDraft.com this weekend also found Watson going 1st among QBs (in Round 3).

I gave Lewis a long look at my Round 4 turn. He’s set to hit free agency in March. If he sticks in New England, Lewis should leave the board by the end of Round 4. If he moves on … we’ll see. I landed on Jones as my early bet to lead the Green Bay backfield. I think he’s more talented than Jamaal Williams, and he seemed to outperform Ty Montgomery in our limited looks at both. It’s also worth noting that Williams barely saw the field until both Montgomery and Jones had gone down. All that said, consider my pick here to be “Packers RB.” We’ll see how the backfield sorts out.

I won’t call Rudolph a bad pick at this stage, but I don’t see the argument for jumping on him here -- especially when you consider that the drafter had also already selected a QB. Jack Doyle, Delanie Walker and Hunter Henry all supplied more PPR points per game than Rudolph in 2017 and remain under contract through 2018. (Walker could be a cap casualty. Jimmy Graham also outscored Rudolph but faces the uncertainty of free agency.)

I wouldn’t bet on Goodwin settling quite this early in ADP, but Jimmy Garoppolo has made the Niners offense much more interesting to watch this offseason. You should expect to pay for Corey Davis if you want him, despite the disappointing debut. Although I like Davis, I will happily let you take him and leave me Marvin Jones any time.

The actual draft position on rookies this early in the offseason is nearly worthless. We still have 3 months of most folks getting to know the players, hours and pages of NFL Draft analysts building them up and then knocking them down -- and then we find out where they’ll actually play next year. For now, just start gauging the names you’ll want to get familiar with.

All that said, it’s also a good time to get some rookie backs in best-ball drafts. The ADPs will generally climb once we learn their NFL landing spots -- often by a lot.

On the other hand, we should all be plenty familiar with Michael Crabtree going way too far behind Amari Cooper. Last season went about as poorly as it possibly could have for Cooper … outside of that K.C. game, of course. And yet he still went nearly 3 rounds of Crabtree, who has finished top 24 in PPR points per game in each of his 3 Oakland seasons. Crabtree’s contract has nothing guaranteed over the next 2 years, but salaries of $7.7 million and $8.25 million remain plenty affordable -- especially given what he has delivered to the Raiders so far. And he’s heading toward just his age-30 season.

Rex Burkhead’s draft position here cautiously assumes he stays with the Patriots. I’m happy to take a shot on Sammy Watkins here -- as my 5th wideout -- no matter where free agency takes him.

Here’s the “what if” round: What if Josh Doctson’s ready to deliver? What if Martavis Bryant finally puts it all together in his contract year? What if the Broncos don’t add a significant piece to their backfield and instead keep building their O-line? What if the Bills upgrade at QB? What if the Browns finally get a QB?

I have no idea how Matt Nagy will fare as a HC in Chicago. Neither do you. Neither does GM Ryan Pace. But he’s an offensive guy who has spent the past 10 years learning under Andy Reid (ouch) -- despite the fact that he won’t turn 40 until late April. I don’t have any numbers to put to it yet, but I like the early potential for fantasy-draft value in the Bears offense. Beyond Jordan Howard, there’s not much likely to push anyone way up the ADP board. But there’s an intriguing amount of talent and opportunity.

That Tampa backfield just might be the most likely in the entire league to add a new starter this offseason. Oakland, however, brings back an old starter who came on in the 2nd half of 2017. Signed through 2018, Lynch looks like a strong value at least in early best-ball drafting if folks remain nervous about jumping on him.

Jerick McKinnon got us all excited right after Dalvin Cook went down but then settled in as a mere complement to Latavius Murray and averaged just 3.8 yards per rush for the season. He checked in just 40th in each of Football Outsiders’ 2 main rushing efficiency metrics. He fared better as a receiver -- finally -- but I remain unexcited. We’ll see what free agency holds.

Chris Carson, on the other hand, faces big opportunity in a backfield that never got figured out after his fibula fracture. We’ll see what Seattle adds to that picture. We’ll also see where Ty Mongtomery stands in Green Bay once he returns from his wrist injury.

Expect Rishard Matthews to spend spring and summer 2018 as a much bigger fantasy draft value than Corey Davis. The Giants backfield might challenge the Bucs as a top candidate for overhaul. Washington enters that mix, too, after Samaje Perine’s lackluster rookie campaign. Kenneth Dixon, meanwhile, will probably be 1 of my favorite summer stashes. Alex Collins definitely impressed in 2017 and should hit 2018 as Baltimore’s lead back. But Dixon should at least get a shot to unseat Buck Allen -- whom he’s much better than.

Jimmy Garoppolo, by the way, went 8th among QBs here. And if I can spend the summer getting Drew Brees late in Round 11, then I’ll be doing a lot of skipping and whistling.

Damiere Byrd flashed in training camp and late in the season, and the Panthers are due for Phase 2 of their offensive overhaul this offseason (further implementing the young guys). I wouldn’t take him ahead of (2017 second-rounder) Curtis Samuel right now, but this is certainly late enough to make a case for either speedster.

Similarly, I don’t know how things will sort out in the Baltimore backfield. But I’m willing to draft Kenneth Dixon or Danny Woodhead or both in this range right now and wait to see.

Jeff Racliffe, by the way, picked his 3rd rookie RB in this round. Dalvin Cook at 2.01 coming off an ACL tear rounds out his RB corps. I’d be curious to see how he’d feel about playing out the season from that start.

Jeff Mans matched Ratcliffe at 3 rookies in this round. No one else wound up with more than 2. Interesting, but I don’t think 3 out of 15 picks is overkill -- especially at this stage.

I have no idea what to make of the Buffalo WRs at the moment. I’ll need to see how their offseason develops. At the moment, I’m not too interested in any of them. I’ll take a lot shot on Zay Jones, who will likely continue to come off the board well after Kelvin Benjamin and Jordan Matthews.

Malcolm Mitchell, on the other hand, looks much more interesting. I just hope he stays shelved for the playoffs so that he can remain a late-round stash at least into summer. Mitchell finished his 2016 rookie campaign 41st among 94 wideouts in Football Outsiders DYAR and 7th in DVOA.