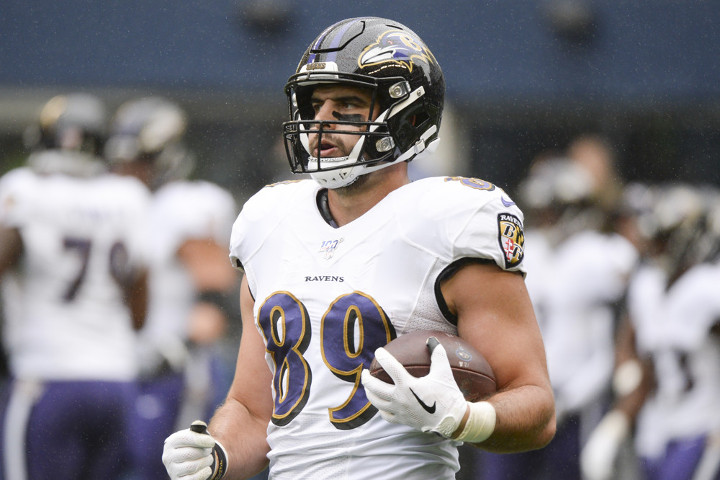 The 2020 fantasy TE crop might be the deepest in recent history. Let’s get right into the names comprising 7 different tiers.

(Note: You can view the non-PPR TE rankings here).

Just a 5-point gap separates Kelce and Kittle. The 49er looks enticing if he drops to late Round 2 — especially if Deebo Samuel misses early season games.

Only 6 points separate Andrews From Ertz. (We project Andrews for 1 more TD.) Both of these guys are nice picks in Round 4 or later.

Engram and Henry bring some durability concerns. Waller was strangely absent from the red zone during his 2019 breakout. (His 11 red zone targets topped Hunter Renfrow by only 1.)

We’re typically targeting high-upside WRs in this range, instead opting to invest in the next 2 loaded TE tiers.

Cook leads this group with 6 projected TDs. We know Gronkowski’s upside extends well beyond that figure, while training camp reports have been rosy. You’ll just have to pony up a Round 7 pick.

Smith and Jarwin are 2 of our favorite discount TEs. Smith brings athleticism and target appeal to a thin pass offense. Jarwin — finally in a full-time role — brings TD potential on 1 of the league’s best passing offenses.

Herndon pops as a breakout candidate. He showed well as a rookie (39-502-4) before an injury and suspension-filled year 2. With scheme and QB continuity — plus WR uncertainty — Herndon could push for top-12 value.

Hooper’s a cheap TE1 candidate, but it’s tough to get excited about his upside in a run-heavy offense. David Njoku at least looks unlikely to see much of an immediate role; he’s missed practice time with a wrist injury.

Smith is appealing from a pure talent perspective. Any missed time from Adam Thielen, Justin Jefferson or Kyle Rudolph would really put the 2nd-year TE on the streaming radar.

Packers HC Matt LaFleur has talked up Robert Tonyan as a potential TE starter over Jace Sternberger. While it’s tough to buy, it’s made Sternberger a guy you probably shouldn’t trust early on.

Ultimately, most of these guys don’t profile as weekly starters. So if you held out this long before selecting a TE, consider grabbing another.

Not much to get excited about here. Burton is somewhat interesting; he’s garnered heavy training camp buzz and will play under a coaching staff that emphasizes TEs. But he’s probably not a TE1 streamer without a Jack Doyle injury. Burton's also now dealing with a calf strain sustained on August 29. He's iffy for Week 1.

Thomas has bounced around the league since turning pro in 2014. 2020 brings his best opportunity yet, as Washington’s TE and WR depth chart looks depleted.

It’ll be interesting to track Gerald Everett’s usage. The Rams spent a Round 2 pick on WR Van Jefferson and return late-season darling Tyler Higbee. “I think Tyler Higbee did a phenomenal job [last year], but I think Gerald Everett’s a guy that I’ve got to do a better job of utilizing his skill set because he’s a difference-maker,” HC Sean McVay said over the spring.