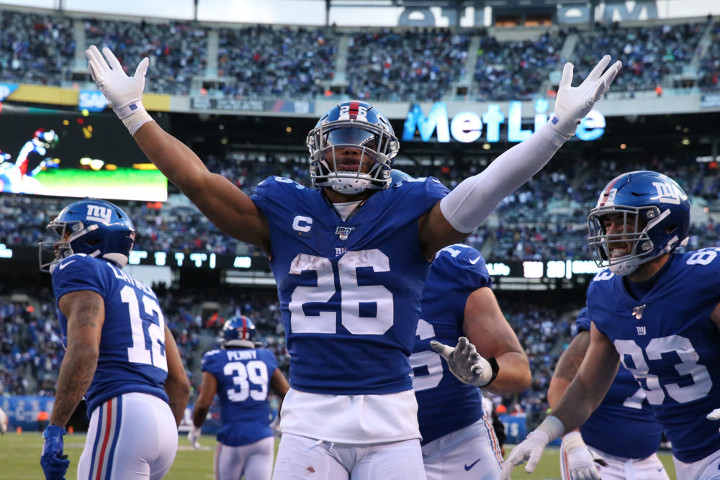 We hit you with QB Tiers yesterday.

Now let’s turn our attention to RB, which might be the trickiest position to handle in fantasy drafts this year. Where are the best pockets of value? And what are the RB ranges to avoid?

Here are your RB tiers for PPR drafts (and don’t forget to check the full rankings and set up your MVP Board):

He’s in a tier of his own. McCaffrey outscored the #2 RB by 150 PPR points last year. We have him projected 88 points ahead of the #2 RB this year.

You could argue these 3 in any order. Barkley has the highest touch ceiling, with the potential for 300+ carries and/or 100+ targets. Elliott is the safest of the trio. He plays on a strong offense and hasn’t missed a game due to injury as a pro.

Cook easily matches the 3 guys above him in upside. He was sitting 2nd among RBs in PPR points through Week 11 last year. But his injury and unsettled contract situation adds risk — and knocks him down into a tier by himself.

These guys all come with a question or 2. But they all have the talent and potential opportunity to score as high-end RB1s this year. They’re all nice targets in the back half of Round 1 or anywhere in Round 2.

Conner tends to go a half-round to full-round later than the other 4 in this tier and is 1 of our favorite RB picks. He’s our honorable mention Comeback Player.

This is the trickiest tier of RBs. They all have concerns over age, injuries, workload and/or quality of offense. But, if things break right, they all have RB1 upside.

Ideally, you don’t need to mess with this group with your 3rd- or 4th-round pick. (The WRs in that range are much more attractive.) But if you’re forced to take a shot, Gurley and Gordon are our 2 favorites from this tier at current ADPs.

This tier is a mixed bag. Taylor almost doesn’t belong because he often goes a full round or more ahead of the rest of them. The rookie has an attractive ceiling and is worth considering if he falls into Round 4.

Among the others, Montgomery has the highest floor thanks to locked-in rushing volume. Jones and Akers are our favorite upside picks at cost. Hunt should have standalone value thanks to his passing-game role and would be a league-winner if Nick Chubb goes down.

You should try to have at least 3 RBs by the time this tier dries up.

Dobbins doesn’t have a safe enough workload to be in the tier above. White doesn’t have a high enough ceiling. But both guys are fine targets in Round 7 or 8.

Consider these guys borderline fantasy starters. Ingram and Johnson should enter the season with big enough roles to be useful — but both could lose volume to rookies. Coleman, Breida and Howard are committee backs. Cohen is poor man’s James White.

This tier includes a few of our favorite upside targets: Moss, Harris and Gibson. We highlighted Moss and Gibson in Sleepers. Harris has been rocketing up the rankings with a strong training camp.

Gibson has gotten pricey, but Moss and Harris remain excellent targets somewhere in the Round 9 through 11 range.

By this point, you should simply be targeting upside. Highlight the guys listed above on your cheat sheet.