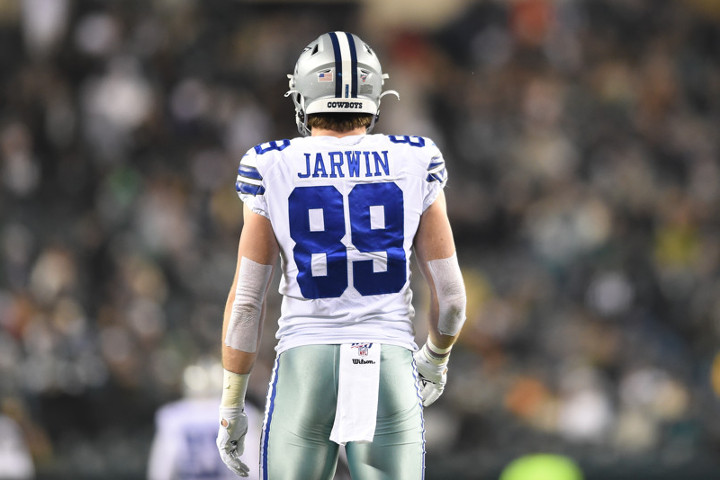 The 2020 fantasy TE crop might be the deepest in league history. Let’s get right into the names comprising 7 different tiers.

Andrews checks in with 112 targets and 74 catches.

Only 1 PPR point separates Engram and Waller. Given Engram’s injury history — and his target competition — Waller is the higher floor play.

Higbee and Cook ended 2019 impressively. Higbee, of course, led all TEs in fantasy points over the final 5 weeks.

Jarwin leads this group in target projection (84). Smith, entering a contract year, tops the others in big-play upside. Factoring in price, they’re 2 of our favorite TE targets.

Gronk — projected for only 42 catches — takes a huge hit in PPR. Indications out of camp are that the Bucs could limit his snaps.

We wouldn’t feel great about any of these guys as weekly starters. Doyle at least profiles as a high floor option. Herndon supplies the breakout potential on a Jets offense starved for playmakers.

Smith is reportedly working all over the formation in training camp. Smart move, as Minnesota’s paper thin at WR. “He has a skill set that we need to be able to utilize with the offense,” HC Mike Zimmer said this month.

Nobody else really pops here. We’ve pumped the breaks a bit on Sternberger, who’s been slow to earn a steady role in Green Bay’s needy offense.

Olsen’s missed 18 games over the past 3 seasons. We’re not sure there’s much left in the tank, but playing with Russell Wilson is a huge boon.

Knox, who trained with George Kittle this offseason, is a 2nd-year player Buffalo’s high on.

If Stefon Diggs misses time, Knox could be a major beneficiary.

Burton’s already built some training camp buzz from HC Frank Reich. If the Colts’ WR corps battles injuries again, we’ll see a ton of Burton and Jack Doyle on the field together. First thing's first, though: Burton needs to recover from a calf strain sustained on August 29. He's iffy for Week 1.