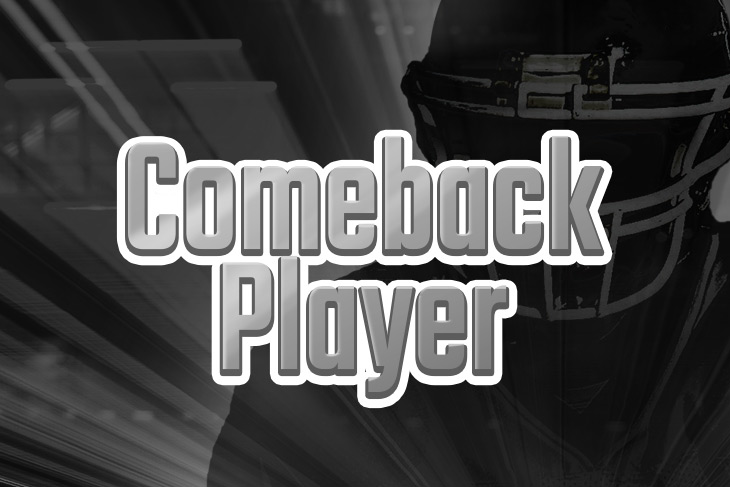 It was really some bad TD luck that made him a fantasy disappointment.

Now healthy, still in his prime and with an upgrade at QB, Rams WR Cooper Kupp is ready to turn in a big bounce-back 2021 season.

Kupp dealt with 2 different knee issues last year. Here's what he's told us about that this offseason:

“[Knee] Bursitis is something I dealt with during the course of the year,” he said in June, via USA Today. “At the end of the day, it really wasn’t what kept me out of that last game…It was a de-gloving injury. It wasn’t bursitis. I dealt with bursitis early in that year but it wasn’t anything, was playing through that just fine, so I’m not too worried about that, obviously.”

So Kupp likely felt some combination of swelling, pain and stiffness — symptoms of bursitis, per WebMD. Nothing too crazy for an NFL athlete.

Now, for the degloving injury Kupp referenced (from the Wild Card Round):

“I think we had 12-15 needles put into my knee that week just trying to figure out – whether it’s numbing the pain or pulling fluid out – all the different things you’re trying to do just to get back on the field. We honestly didn’t call that until the last second in terms of I wasn’t going to be able to go, which was a heartbreaker, but that thing really ended up tearing out for a good portion of the offseason, in terms of the time it took to get that thing going. It was a weekly process getting someone to come out every single day of the offseason, try to work through that so I could get back training again. But it’s feeling great now, no issues with it.”

It’s surprising to hear how Kupp tried to play hurt. Even more so when you read WebMD’s description of degloving:

Degloving happens when a large piece of skin and the layer of soft tissue right under it partially or completely rip from your body. These layers of skin don't receive blood even if they are still attached to the injured area.

But the main takeaway is that Kupp — who participated in OTAs — is back at full health now. Kupp’s last regular season absence due to injury was Week 10 of 2018 (ACL tear).

While Kupp wasn’t a 2020 fantasy stud, it’s not like his play really declined. He ranked a respectable 28th in yards per route run among 87 WRs with 50+ targets. He finished 30th in Pro Football Focus' receiving grades. And, per PFF, Kupp tied for 6th in missed tackles forced per reception.

And get this: Over the past 4 seasons, no WR has been better at both getting open and gaining yards after the catch.

Note: PFF charts “open” receivers as those with 2+ yards of separation at the catch point. 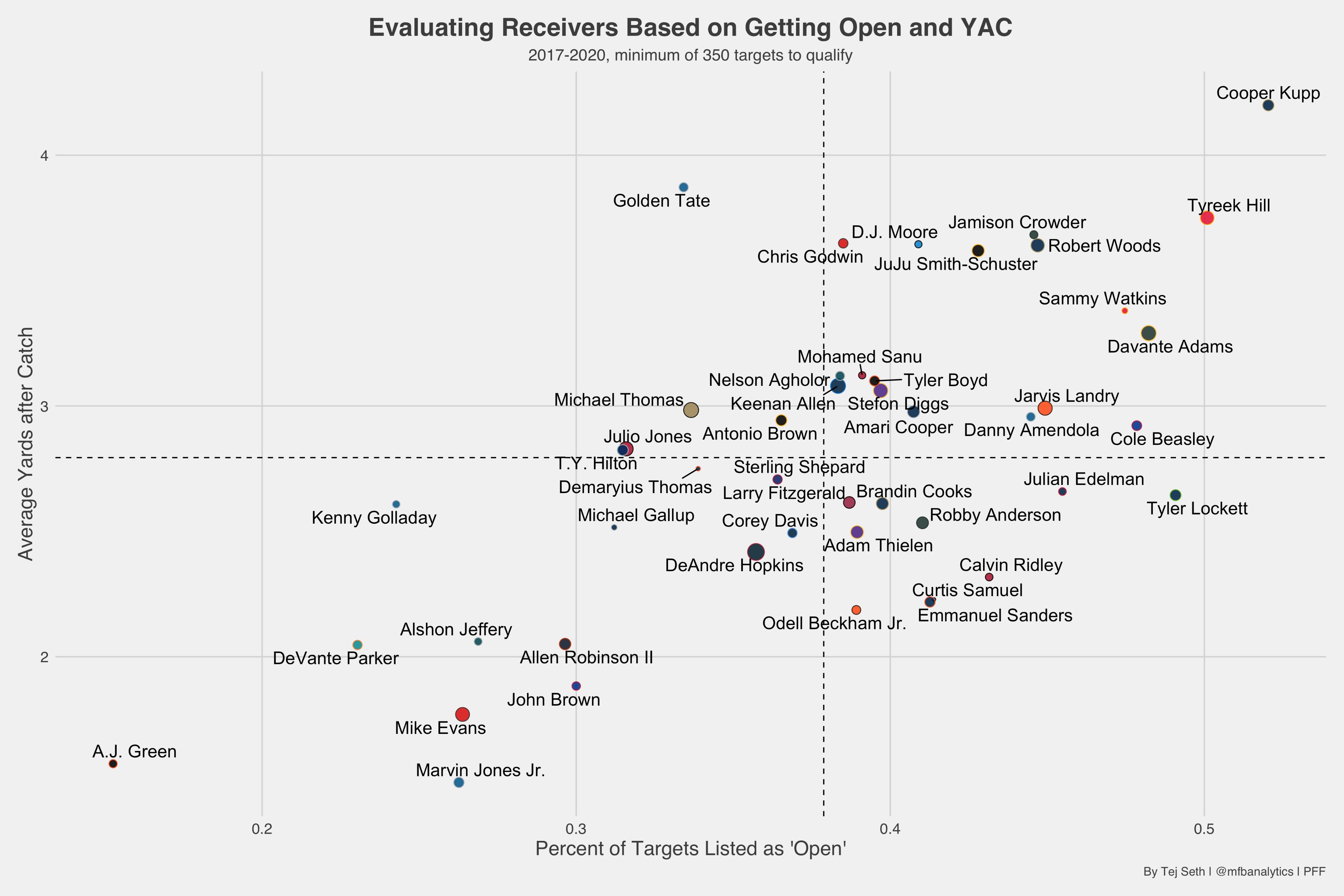 Kupp's poor fantasy performance last year came down to a lack of scoring.

Expect Kupp's scoring opportunities to rebound in 2021, though, thanks to a significant upgrade at QB.

Matthew Stafford enters year 13 looking to supply an upgrade. By just about any advanced metric, we have reason to believe he’ll far out-perform Jared Goff.

Stafford’s simply the superior overall passer — and he brings the more aggressive approach. Back in 2019 — with a healthy Kenny Golladay — Stafford led the league with an 11.4-yard average depth of target.

The Rams lost WR Josh Reynolds and TE Gerald Everett, who combined for 143 targets last year, in free agency. They were clearly looking to add speed in their place.


First came the March signing of DeSean Jackson, an undeniable deep threat with a worrisome injury past. In 2020 alone, he suffered 3 ankle injuries (including a fracture) and a hamstring strain. The 34-year-old has missed 28 games over the past 3 seasons, so we can’t reasonably expect him to make it through a full slate.

The same concern arises for Tutu Atwell, Los Angeles' Round 2 pick. He's an explosive athlete but stands just 5'8 and 155 pounds. Our pre-draft scouting report shows how guys at that size just don't produce in the NFL.

In short: Don't expect a dip in volume for Kupp. Our current projections have him pegged for 135 targets -- 15th most at WR.

Cam Akers' Achilles tear robs the Rams of a potential breakout star. At minimum, his loss puts a serious strain on the backfield depth.

While we expect a veteran signing or trade, currently rostered RBs include:

Henderson brings big-play ability but goes just 5'8, 208 pounds. He's the only back on the roster with an NFL snap on offense.

So it's quite possible that rush efficiency takes a step back -- and the pass volume a step forward. Here's what we wrote in our article dissecting the impact of Akers' injury:

"Between the loss of Akers and arrival of Matt Stafford, we could see the Rams lean significantly more on the passing game this season. They've been between 54.5% and 56.5% pass in 3 of McVay's 4 seasons. But when the running game struggled in 2019, they threw it on 62% of their plays. We could see a similar run/pass split in 2021."

That 62% pass rate ranked 5th league-wide in 2019 and would have ranked 4th last year. Such a development would lift the lid off Kupp's target upside.

Kupp's ADP is currently sitting in the late 4th or early 5th round depending on where you're drafting. He's generally going well outside the top 15 WRs.

He turns up at PPR WR13 for us, roughly 2 points behind Terry McLaurin. So we're essentially talking about a WR1 that you can get for a WR2 price.