Travis Kelce crushed it last year, even by his own lofty standards.

As I mentioned back in my March scoring review of the position, the #1 TE appeared on 19.4% of all league-winning FFPC best-ball rosters for the 2020 season, according to Fantasy Mojo’s data. That was the 2nd highest win rate among all players for the TE-premium format (1.5 points per reception or TEs; 1 PPR for other positions).

Darren Waller fell not far behind, ranking 4th among all players in win rate. No other TE came within 6.5 percentage points of Waller’s rate, and the next 3 TEs on the list all carried ADPs of TE10 or later into the year.

So it makes sense that we should be feverishly chasing Kelce and Waller … right?

Well, Kelce’s PPR total for 2020 marked the largest score at the position since Rob Gronkowski’s 2011 and the 2nd largest ever. Waller’s 2nd-place tally marked the 8th largest ever for a PPR TE. It checked in 3rd-highest among TE2 finishers since 2011, trailing Jimmy Graham’s total from that year and Zach Ertz’s from 2018.

Those historical numbers point to likely regression from the top TE scorers this season. So does the fact that the whole league scored more than usual in 2021.

Check out the annual points per game in the NFL since 2002, when Houston became the 32nd franchise. 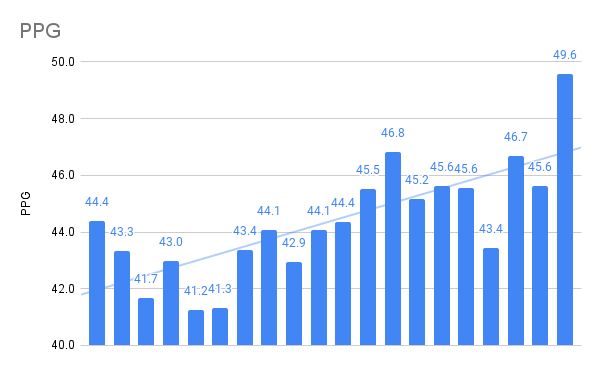 We should expect scoring to trend up, of course. The league has showed us with rule changes for years that it wants to encourage points. But last season gave us nearly 3 more points per game than in any other season in the span. The 49.6 points per game in 2020 beat the average for that whole span (44.4) by 5.2 points per game.

So we should probably expect the whole league to score less in 2021. If that happens, TE could feel it more than other positions.

The collective TD rate for TEs spiked in 2020. 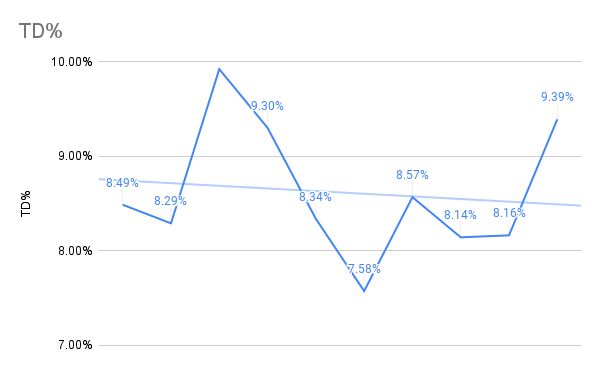 Last year’s 9.39% TD rate marked the 2nd highest number for the position over the past 10 years. So it’s almost definitely coming down.

So with all this potential for regression, should we fade the position until later in drafts?