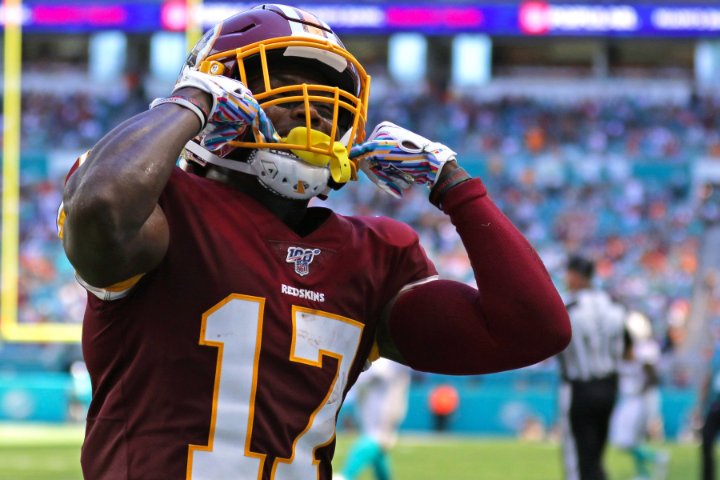 If you’ve been eyeing any of the Panthers wideouts or Kenny Golladay, then you might want to read on.

And if you’re already looking ahead to fantasy-playoffs schedules for your drafting, then you should probably stick around for some Washington info.

Before we get to that, though, let’s step back and specify what we’re here to do.

This article should not shape your drafting. Adhering too closely to strength-of-schedule even following in-season data can get you into trouble. You might watch your stud wideout rack up points on the bench because you favored a #3 WR in a good spot.

That risk only grows in the preseason, when there’s much more we don’t know.

What we’re looking for here is tiebreaker-level info: a nudge toward 1 wideout or the other when you’re struggling to decide. Or perhaps a sleeper for the early or late weeks because of what could be some favorable matchups.

What Makes a Favorable Matchup?

I looked back over a bunch of categories, with stats dating to 2008, and found fantasy points per target to be most worthwhile.

First of all, it makes sense. Looking at points allowed on a per-target basis can reveal defenses that are playing better or worse than their total numbers might indicate. Seattle, for example, allowed the 4th-most total PPR points to wideouts last season. But the Seahawks ranked 6th toughest in points per target.

That fell more in line with their 2019 performance against fantasy wideouts than the total points allowed did. And Seattle has ranked among the league’s bottom half in TDs allowed to WRs every year since 2011.

So you’ll find the Seahawks included among the negative WR matchups below, in spite of their seemingly weak performance in that area last season. We’ll also pick out 5 other tough matchups, as well as 6 friendlier defenses.

Fantasy points per target also proved more predictive year-to-year. It still didn’t correlate strongly from season to season, but it did so at a higher rate than any of the other categories I looked at -- and much higher than most.

As I’ve done with each other position, I found the median fantasy points allowed to WRs for every included season and then compared each spot in the rankings to that median. Here are the resulting effects, in terms of scoring added or taken away vs. the median:

The big splits came at the top 7 and bottom 7 here, whereas we used top 8 and bottom 8 at other positions.

The effects for those ranges remained similar. The 7 friendliest WR defenses all added more than 10 percentage points to position scores, while the 7 toughest defenses took away more than 10 percentage points worth of scoring. I used just the past 3 seasons for this portion, because we’ve seen an uptick in the scoring effect at the top of the charts.

The approximate average impact of the 7 easiest defenses: +16.9 percentage points.

The approximate average impact of the 7 stingiest defenses: -16.5 percentage points.

We’ll use those numbers in the schedule adjustments below.

First, let’s determine which defenses might look more or less favorable for our fantasy wideouts in 2021. Knowing that I can’t accurately assign all the defenses, I’ll go with 6 that look like good candidates for each side.

The Falcons have ranked among the worst 10 defenses in PPR points allowed per target for 4 straight years. That included ranking 6th, 4th and 8th worst the past 3 years.

Dallas allowed more PPR points per target to WRs than any other defense last year. A 2021 squad that should present 1 of the league’s top offenses and a still-weak defense seems ripe for shootout potential.

The Lions yielded the league’s 3rd-most PPR points per target to receivers last season, their 2nd finished among the “top” 5 in that category among the past 3 seasons. Unless Dan Campbell plans to bite off the kneecaps of opposing WRs himself, it’s tough to see how the Detroit pass defense got a lot better this offseason.

Houston presented a challenging defense not that long ago. Last season, however, the Texans allowed the 5th-most points per target to WRs. They also fell to 30th in Football Outsiders’ defensive DVOA overall, ranking 29th against the pass.

2018 marked Minnesota’s 3rd straight season among the league’s 4 stingiest per-target WR defenses. Since then, though, the Vikings have slipped to 12th-most and then 2nd-most PPR points allowed per target to receivers. They addressed that issue this offseason by adding CB Patrick Peterson, who heads into his age-31 season after posing the worst Pro Football Focus coverage grade of his career. Peterson ranked just 91st among 137 qualifying CBs in that category in 2020. Minnesota also traded down at safety by letting Anthony Harris walk to Philly and replacing him with Dallas castoff Xavier Woods.

The Ravens have finished 4 straight seasons among the league’s 4 stingiest WR defenses in points allowed per target.

In HC Sean McDermott’s 4 seasons, the Bills have only once finished higher than 27th in most PPR points allowed per target. Even that year, they only climbed to 21st.

Denver rebounded from yielding the 14th-most per-target points in 2019 to 24th in that category last season. Now they get OLB Von Miller back, with what should be a full-strength Bradley Chubb on the other side. (He was coming off an ACL tear last season.) The Broncos also signed CBs Ronald Darby and Kyle Fuller in free agency and drafted CB Patrick Surtain II 9th overall.

The Chiefs’ high-scoring offense makes this look like a favorable spot for starting your WRs. But the Chiefs have finished 3 straight seasons ranked 26th or lower in PPR points allowed per target to the position.

Pittsburgh has gone 23rd, 27th and 25th in per-target points allowed over the past 3 years.

I mentioned Seattle’s case above. They have allowed the 26th- and 27th-most points per target the past 2 years and perennially proved stingy on WR TDs.

Now it’s time to plug those matchups into the 2021 schedule and see which teams might be most affected.

The chart below counts up the positive, negative and neutral weeks. The “16-game factor” column assigns values to those matchups. Neutral counts as 1, representing 100% of a QB’s expected scoring -- no adjustment up or down.

The positive matchups get a value of 1.1686. That’s the average impact from the bottom-7 defenses in the chart above.

The negative matchups get a value of 0.8349. That represents the average negative impact of the top-8 defenses.

(And we’re starting with the 16-game version to cut out Week 18, the new end of the regular season.)

D.J. Moore and Robby Anderson -- perhaps Terrace Marshall as well -- look like they get a nice draw overall. Even the tough Tampa Bay defense they’ll face over the final 3 weeks has hurt RB scoring much more than it has WRs in recent seasons.

The Giants and 49ers WRs also get some help, particularly over the 2nd half.

Late schedules for Washington and Cincinnati are worth noting, for opposite reasons. The Football Team might luck out for fantasy purposes in bunching both Dallas and both Philly matchups at the end of the schedule. The Bengals, on the other hand, get tough WR draws at Denver, vs. Baltimore and vs. Kansas City in weeks 15-17. We’ll see as that time draws closer how comfy we should feel in still using Cincinnati wideouts.

If your league plays through the final week of the regular season, here’s your 17-game chart:

Pittsburgh avoids the trip to Baltimore if you skip Week 18 but adds that negative matchup here. The Chiefs add a trip to Denver, though the only reason to sit Tyreek Hill would be if K.C. already has its playoff seed locked up once again.