When should you target your starting QB in 2022 fantasy football drafts?

You can simply trust your Draft War Room to help guide that for your specific format, if you want to save yourself the reading time. But this article will reveal some recent QB drafting trends … along with whether they match QB scoring trends.

To see whether QB drafting has changed in recent seasons, I looked at BestBall10s ADP since 2018. Why that source? Because it gives us:

And what did those numbers reveal? You’re drafting your top QB earlier. 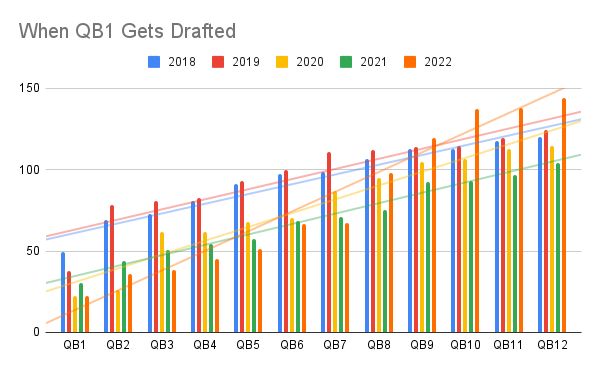 This year doesn’t mark the earliest ADP for the #1 or #2 QB over the past 5 years. But it’s the 2nd earliest for each of those positions. And QBs 3-7 are coming off the board earlier than in any of the previous 4 years.

QB8 through QB12, meanwhile, are all going later. The first of that group is merely coming off the board later than the QB8 of the past 2 seasons. QBs 9-12, though, are going later in drafts than in any other season among the past 5 years.

Does that match with how the position has scored? It doesn’t seem to. 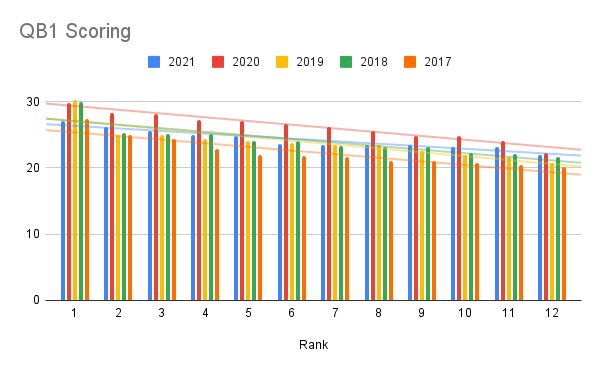 What’s that mean? The draft treatment of the earliest QBs this year doesn’t appear to align with recent scoring trends. Thus, there’s questionable value in grabbing 1 of those 1st few QBs off the board.

Jared and I have certainly spoken at various points about players we like in that range. But the optimal approach to drafting your QB1 might just be selecting the player among those top 8 or so that falls past ADP – rather than making a slight reach to get your guy as the 4th or 5th off the board.

Our QB rankings back that up. Just 12 total fantasy points separate our current #2 QB from #6, while ADPs and actual draft positions will vary quite a bit by format, draft site and even specific league.

Does the gap between #1 Josh Allen and the rest of the group mean you should target the Bills QB? Quite possibly, as long as he gets to you in a sensible range. Reaching ahead of where the Draft War Room recommends him to you is where you can get into trouble. Because even though we project Allen as the clear #1, we all know the final scoring standings won’t look exactly the same as the preseason rankings.

Among that group, Eagles QB Jalen Hurts looks like a standout if all go at non-tournament ADP. But we’ve also seen drafts where Kyler Murray slides.

The projections gap between current #7 Joe Burrow and the next few QBs doesn’t match the advantage Burrow carries in non-tournament ADP (re: outside of FFPC and Underdog drafts). So if you don’t land on 1 of our top 6 QBs in your draft, then looking past Burrow and considering Tom Brady, Russell Wilson or Trey Lance would be good.

Lance will be particularly interesting to watch in that range. Our base ADP has him at QB13. FFPC drafting, on the other hand, finds Lance going 8th among QBs. He’s all the way up to QB7 in Underdog drafting.

It’s easy to see how the 49ers QB’s rushing upside would look attractive in a tourney setup. But his high ceiling can be a difference-maker in your 12-team league, too – especially if you’re able to draft him at the bottom of QB1 territory.

You can afford to target Lance in that range, because the proximity of his projection to those of Wilson, Brady, Matthew Stafford and Dak Prescott offers insurance – in case someone in your league snags Lance ahead of you.

Beyond that range at QB lies some attract platoon or QB2 types with top-12 upside.Jaguars QB Trevor Lawrence at #14 in our site rankings sits ahead of ADP across formats. He presents rushing ability plus renovations to the coaching staff and surrounding talent.

Bears QB Justin Fields’ position in our rankings looks similar to his ADP. His offense looks tougher to bet on than Jacksonville’s this year, but Fields brings even more rushing upside than Lawrence. There’s room for him to have a season like Jalen Hurts’ 2021.

Where else the value lies will depend on your format and where players go in your specific draft. The DWR, for course, will help highlight when is the right time to grab your guy(s).

TD passes earn 4 points in the most common scoring format today. But the more points you get per TD throw – relative to other scoring categories – the more important the pocket passers become.

You’ll see the top of your rankings get shuffled in this format, with Murray and Lamar Jackson dipping vs. our default site rankings. Brady gets a boost; Lance and Hurts tumble. You get it.

This format can often push QBs significantly up in drafts. But rather than chasing to ensure that you get a “good” one, look for potential value in patience.

Your 12-team league that starts 1 QB per lineup isn’t going to run out of options. And if it’s a 10-team outfit, that’s even more true.

Honestly, the DWR can be even more helpful in these formats.

I mentioned how 6-point TDs can push QBs up the board. These formats can make drafters downright frantic. Figure out your QB tiers ahead of time, and then don’t get caught up in position runs.

That doesn’t mean you should back away just because the 3 teams ahead of you all selected QBs. If the next guy ends a tier for you at the position, then take him. But if that run clears out a tier and you have similar values on the next 6 guys, don’t reach for 1 just because you’re scared of missing out.

You’ll likely never be excited to draft Mac Jones or Jared Goff. But those guys will get into plenty of 2-QB and superflex starting lineups throughout the year. Goff posted 5 QB1-level scores among his 14 outings last season, for example.

And you’ll be settling for him because you grabbed a stud earlier at a different position.