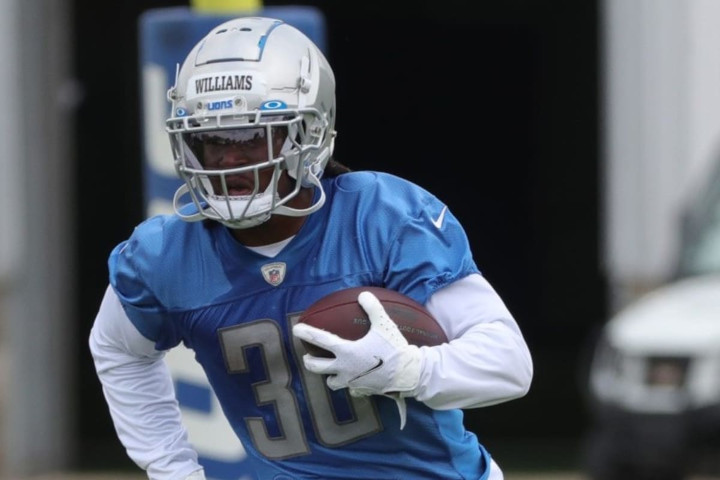 A RB target is essentially worth 3 times more than a carry in PPR leagues. Over the past 3 seasons, a RB carry has been worth an average of .63 PPR points. A target? 1.54 PPR points.

So pinpointing RBs set to see sneaky big volume in the passing game is a surefire way to find values late in your PPR drafts.

Here are 5 RBs usually available in Round 9 or later who have a real chance to catch 40+ balls this season and return big PPR profit.

We’re projecting D’Andre Swift to comfortably lead Detroit’s backfield in catches this season. But that doesn’t mean that Williams can’t also be a big factor in the passing game.

The Lions sport arguably the worst WR group in the NFL: Tyrell Williams, Breshad Perriman, Amon-Ra St. Brown, Quintez Cephus and Geronimo Allison. So expect the RBs -- along with TE T.J. Hockenson -- to soak up a bunch of the targets.

New OC Anthony Lynn has a history of getting his backs heavily involved in the passing game. His 5 NFL offenses (2016 Bills, 2017-2020 Chargers) have targeted RBs at the following rates:

For perspective, the league-wide average for RB target rate over that span was 19.7%.

We could also get fairly big passing volume here. The Lions would probably like to be a run-leaning offense. But game script might prevent that. Detroit’s over/under win total is currently set at 5 -- 2nd lowest in the league. That means they’ll likely be trailing early and often, forcing them to shift toward the pass.

Williams is a proven pass catcher, tallying 25+ grabs in all 4 seasons with the Packers, including 70 total across the last 2 years. He’s ranked top 23 among RBs in Pro Football Focus receiving grade in both of the last 2 seasons -- and top 7 in pass-blocking grade.

Drake got a surprisingly lucrative 2-year, $11 million deal from the Raiders in free agency. The talk since has been about his versatility and ability in the passing game.

NFL Network’s Ian Rapoport said immediately after the signing that HC Jon Gruden “sees Kenyan Drake as a jack-of-all-trades — a joker, as they say. He’ll figure prominently in the passing game.”

Here’s what Drake said about his role in Vegas: “Coach Gruden said that he was going to use me in a multitude of ways, playing receiver, playing running back. Just having the ability to kind of use my versatility as a weapon in the open field is something that really spoke to me.”

Gruden, of course, has been using pass-catching backs behind starter Josh Jacobs for the past 2 years. In 2019, RBs Jalen Richard and DeAndre Washington combined for 84 targets. And last season, Richard, Booker and Theo Riddick combined for 50.

Look for Drake to settle somewhere between those 2 numbers this year. While he was phased out as a pass-catcher in Arizona last season, he caught 50+ balls in both 2018 and 2019.

Drake brings an added bonus of being a potential RB1 if Jacobs misses time.

I get it. You don’t wanna draft Texans. Especially Texans RBs after Phillip Lindsay, Mark Ingram and Rex Burkhead joined Johnson in the backfield.

But here’s the thing: No one wants to draft Texans RBs. That’s why Johnson’s ADP is sitting in the 9th or 10th round.

He’s a pretty good bet to beat that price tag -- if for no reason other than the fact that he figures to handle the majority of the pass-catching work out of this backfield.

Johnson has been a top receiving back since entering the league in 2015. He’s averaged 3.3 catches per game and a big 10.5 yards per catch for his career.

Here’s how that compares to Lindsay, Ingram and Burkhead:

We’re not sure how carries will be divvied in this backfield. But Johnson is a safe bet to lead the way in targets -- probably by a significant margin. That’s what we’re looking for in PPR drafts. And it’s especially what we’re looking for when we’re talking about a Texans team that figures to be playing behind for the majority of this season.

So you might want the Colts to make Jonathan Taylor a true 3-down back, but why would they phase out an excellent pass-catcher in Hines? They likely won’t.

Even when Taylor exploded down the stretch last year, Hines remained the team’s lead pass-catching back. He out-targeted Taylor 24 to 16 over Indy’s final 6 games, including the playoff loss in Buffalo.

Hines’ 4 targets per game over that stretch were down from his 5 per game over the first 11. And it’s worth noting that Taylor actually ran 95 pass routes to Hines’ 89 over those final 6 contests.

So expect Taylor to eat into Hines’ target volume a bit this season. But Hines turned 76 targets into a 63-482-4 receiving line and an 18th-place finish among RBs in PPR points last year. He can lose a bit off that and still return value at his current RB41 ADP.

New England was not fertile ground for pass-catching production last year. With Cam Newton under center for the majority of the season, the Patriots ranked 31st in both pass rate and pass attempts.

The result for White was a dip to 49 catches -- his fewest since 2015. He finished 42nd among RBs in PPR points. And with just 5 top-24 weeks, he wasn’t very useful in lineup-setting or best-ball leagues.

White will likely disappoint again as long as Newton is starting for the Pats. But we’re expecting to see 1st-round rookie QB Mac Jones at some point this season -- potentially early on. And if and when Jones takes over, New England’s pass volume should rebound nicely.

He’s ready to return to at least RB3 territory in PPR leagues when Jones takes over. White is currently being drafted outside the top 50 RBs.