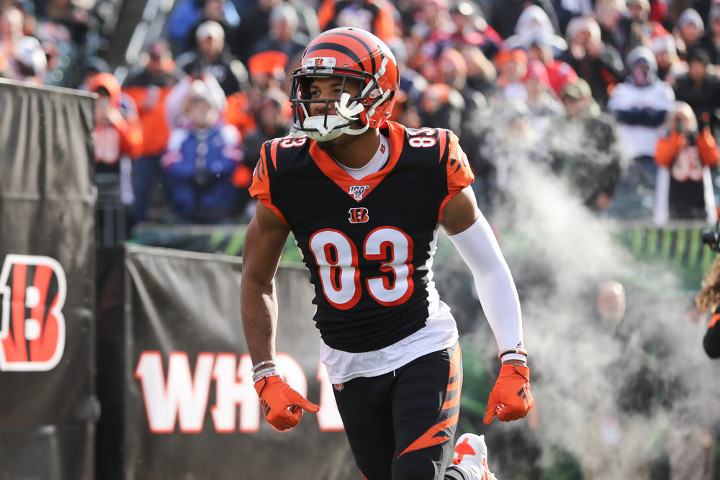 Volume trumps all in fantasy football. That’s true at WR. And it’s especially true at WR in PPR leagues.

Check out the correlation between targets and PPR points among top 50 WRs over the past 3 seasons:

So when mining for sleeper WRs in your PPR drafts, target volume.

Here are 7 WRs going in the 8th round or later of PPR drafts that we project for 75+ targets.

Boyd has finished 15th and 17th among WRs in PPR points the past 2 seasons — on Bengals teams that ranked 24th and 19th in passing yards. Those squads were mostly piloted by Andy Dalton, with sprinkles of Jeff Driskel and Ryan Finley.

It’s likely that Joe Burrow will be the best QB Boyd has ever played with. Burrow is coming off a record-setting 2019 campaign in a pro-style LSU offense. He should immediately elevate this Bengals passing game — including Boyd.

Team passing volume should also be on Boyd’s side. The 2019 Bengals threw at the 6th-highest rate when games were within 1 score. They also ranked 9th in total plays and 7th in situation-neutral pace. This is an up-tempo, pass-heavy offense.

And if you’re worried about what the return of A.J. Green will do to Boyd’s numbers, stop. Over the past 2 seasons, Boyd has averaged .8 more catches and 15 more yards per game with Green than without him.

Crowder is the odds-on favorite to lead the Jets in targets this year. His biggest challengers are WRs Breshad Perriman and Denzel Mims. Neither guy has ever caught a regular-season pass from QB Sam Darnold.

Crowder, meanwhile, has a season under his belt with Darnold in this Jets offense. And we just saw him lead the team with 122 targets — despite contending with WR Robby Anderson, who’s now in Carolina.

Crowder turned that volume into a 78-833-6 line and 26th-place PPR finish. And remember that Darnold came down with mono early in the season, missing Weeks 2, 3 and 5. He got rolling over the 2nd half of the year, and Crowder racked up 43 catches for 511 yards and 6 TDs over his final 9 games. Only 13 WRs scored more PPR points during that span.

Crowder brings similar upside in 2020 and at least looks like a good bet for WR3 production.

It’s tough to peg the Giants’ pass-catching corps. Besides Shepard and Tate, WR Darius Slayton, TE Evan Engram and RB Saquon Barkley will be heavily involved. Injuries prevented us from seeing all those guys on the field at the same time last year, though. And they’ll be operating in a new offense this season under OC Jason Garrett.

That uncertainty makes it a tricky fantasy situation. But it might also turn Shepard and Tate into values. Both guys are going well outside fantasy-starter range — and later than Slayton.

The 23-year-old Slayton admittedly has the highest ceiling of this trio. But Shepard and Tate are safer bets. Get this: In their 6 healthy games together last year, Shepard led the way with 52 targets, Tate was next in line with 41 and Slayton brought up the rear with 34 looks.

Shepard also beat out Tate and Slayton in Pro Football Focus’ receiving grades. He missed 6 games with a pair of concussions but ranked 28th among WRs in PPR points per game.

Tate was just ahead of Shepard at WR27 in PPR points per game. And he was 1 of the most reliable wideouts in all of fantasy football, finishing among the top 36 in 9 of his 11 outings. That 82% rate was beaten by only Michael Thomas.

The results were unsurprisingly ugly: a 51.4% catch rate and 11.6 yards per catch. Despite ranking 28th at his position with 105 targets, Samuel finished just 36th in PPR points.

So all the change in Carolina this offseason should be good news for Samuel. New HC Matt Rhule recently talked up Samuel’s versatility, noting that he can be used "at RB, slot, outside.” Amen! Get the ball in his hands and let him use that 4.3 speed in the open field.

QB Teddy Bridgewater also looks like a nice fit for Samuel’s game. He sported the league’s shortest average depth of pass attempt in his 5 starts for the Saints last year but completed a sparkling 69.7% of his throws. A conservative, accurate QB should be good for a short-range, run-after-catch WR.

Samuel has additional target competition this year with the arrival of WR Robby Anderson. But passing volume should be on everyone’s side considering the Panthers again figure to trot out a bottom-barrel defense that will have them playing from behind early and often.

So another 100+ targets are within range for Samuel. And the new coaching staff might expand his ball-carrying role from the 19 rush attempts he recorded last year.

There are lots of targets up for grabs in Washington. (We can argue about the value of those targets … but targets are targets!)

Sims is a good bet — and might even be the favorite — to finish 2nd behind McLaurin in targets. He fared well in an expanded role down the stretch last year, turning 36 targets into a 20-230-4 line over the final 4 games. He carried 3 times and ranked 9th among WRs in PPR points in those last 4 weeks. Sims checked in 22nd in yards per route run and 31st in Pro Football Focus’ receiving grades among 56 WRs with 20+ targets over that span.

Gage averaged 7.3 targets per game after Mohamed Sanu was traded to New England last year. That’s a 16-game pace of 117 targets, which would have ranked 21st among WRs.

So don’t bank on Gage topping 100 targets in 2020. But 80 or so is definitely doable. The Falcons should be 1 of the pass-heaviest offenses in the NFL this year. They’ve ranked 7th, 1st, 3rd and 1st in pass rate in 4 seasons under OC Dirk Koetter. Their finishes in pass attempts: 8th, 3rd, 3rd and 1st.

Jones and Ridley are back atop the depth chart this year. But Gage should be safe in the #3 spot. And TE Hayden Hurst might not match Hooper’s target share in his 1st year with the team after a lost offseason. That’d just mean more targets for the WRs.