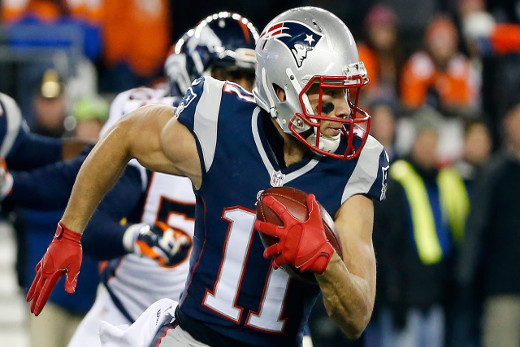 Return-yardage leagues remain uncommon in fantasy. Yet they add another strategy element, boosting the outlook of some established studs and elevating those who might otherwise lack relevance.

The next 2 months will ultimately determine roles. But entering training camp, here are the top fantasy-relevant guys we expect to handle returns.

Coming out of minicamp, Cohen said he doesn’t expect his role to change much in 2019. We buy it — at least from a special-teams standpoint.

David Montgomery supplies another backfield talent, and he should allow Cohen to stay busy on punts. The undersized speed back led the league last year with 33 punt returns and 411 yards. That’s a rock solid 12.5-yard average.

Cohen didn’t score, but he reached paydirt once as a rookie. There’s a decent chance he gets back in the scoring column in year 3 if he sees ~30 more returns. Cohen will need to improve on ball security, though, as he fumbled 4 times on returns alone last year.

Hill’s off-field drama should soon involve a suspension, although it’s no longer expected to be 8+ games. Whenever he hits the field, expect Hill’s game-breaking speed to remain on special teams.

Since 2016, the 25-year-old owns 5 return scores. No other player has reached that total over the past 3 seasons.

Kansas City would be silly to completely eliminate Hill from special teams in 2019. But they used a Round 2 pick on Georgia WR Mecole Hardman, who boasts 4.33 speed and was compared to Devin Hester by ST coach Dave Toub.

Hardman’s expected to at least handle kick returns with a chance to see action on punts, too. A quick rise would likely drop Hill’s return volume for the 3rd straight season.

Since entering the league in 2009, Edelman ranks 6th in punt return yards. His role remained prominent last year with 20 attempts — plus 11 fair catches. That marked Edelman’s most opportunities per game (2.58) since 2013.

He averaged a career-low 7.7 yards per return and went a 3rd straight year without a score. Still, there’s been no indication that the Pats will scale back Edelman’s role after he handled all but 6 punt returns last year.

Lockett handled all 25 of Seattle’s punt returns last season. The 26-year-old averaged a career-low 5.7 yards per attempt, while he went his 3rd straight year without a score.

Lockett didn’t score on special teams, but it’s clearly in his arsenal. He scored on 3 returns (2 on KR, 1 on PR) over his first 3 seasons. The real question is: Can Lockett’s return volume continue to place him among the league leaders?

With shallow pass-catching depth — thanks to Doug Baldwin’s retirement — Lockett’s offensive role is as vital as ever. Here’s how HC Pete Carroll characterized Lockett’s return potential in June (via ESPN): “He’s such a great catcher and a great return guy it’s hard to put somebody else in his spot. But, we continue to always lean that way. We’d rather have him pick and choose when we do it, particularly on the kickoffs. He’s just such a great punt returner, it’s hard to take him out of there.”

Our translation? Expect fewer returns from Lockett in 2019.

The 49ers will rely on Pettis as their WR1 this fall.

But that doesn’t mean he’ll surrender punt-return duties after seeing 11 opportunities across 12 games as a rookie.

“We’re going to play the best guy back there,” ST coach Richard Hightower said in June, via 49ers.com. “That’s been coach (Kyle) Shanahan’s philosophy and that’s our philosophy.”

Said Pettis: “I don’t think they’re worried about if I’m starting or not (whether to) put me back there. I think it’s just that they’re going to put the best guy back there. Obviously, that was (wide receiver) Trent (Taylor) last year.”

Indeed, Taylor beat Pettis in yards per return (3.0 vs. 7.8), while Pettis fumbled twice.

We’d caution against putting too much stock in a limited sample, though. Pettis set an NCAA record with 9 career scores on punt returns at Washington. So he has the necessary skill set.

You’re drafting Pettis for his breakout WR potential, but a return role would provide an out if he falls shy of expectations.

Quinn stayed healthy for only 3 games as a rookie, but he handled 8 punts (4 fair catch, 4 returned). Washington lost 2 punt-return candidates this offseason in Jamison Crowder and Maurice Harris. That duo combined for 5 returns last season.

CB Greg Stroman figures to be Quinn’s main competition. But here’s how Tarik El-Bashir of The Athletic described Quinn’s outlook in June: “Coaches are excited about Quinn, the second year slot receiver who is slated to replace Jamison Crowder in addition to filling the team’s No. 1 punt returner role.”

If your league awards PPR, flag Quinn on your MVP Board.

Kirk handled 21 of Arizona’s 36 punt returns as a rookie, despite missing the final 4 games with a broken foot. He was nothing special with 7.8 yards per return, although he did bust off a 44-yarder.

Bob McManaman of the Arizona Republic projected Kirk as the team’s primary return man in mid-May. Even if Kirk shares the job, it only adds appeal to a WR with clear breakout upside.

Hardman arrived in Round 2 of the 2019 NFL Draft, and it’s not just because of receiving ability.

At Georgia, he handled 74 total returns from 2017-2018. He scored only once in those opportunities but notched a strong 15.2-yard punt return average and a solid 25.0-yard kick return average.

Those results — plus 4.33 speed — have ST coach Dave Toub fired up.

“Dave had the biggest smile in the room,” Chiefs GM Brett Veach recalled from a draft day conversation on Hardman. “There were a few returners that we had Dave go out [and watch] and we do that every year. He came back, and he said Mecole, he thought, was the closest thing to Devin Hester that he’s seen in a long time. He was ecstatic. He is by far the best punt and kick returner in the draft and, again, it’s hard to turn down that kind of speed.”

Toub also shared this eval in early June (via Chiefs.com): “He’s probably more advanced right now as a kickoff returner because [as a] punt returner, it just takes a long time to get the ball reads and make catches and tough catches and short catches and catches in a crowd. So we’re just going to be out there, we’re going to catch a lot of balls and get him right.”

Ultimately, Hardman should at least settle into kick-return duties. The issue here is an 11th-round ADP in traditional leagues and the presence of Tyreek Hill, who’s established as an elite punt returner.

A Hill suspension would at least open up opportunities for Hardman.

Westbrook profiles as Jacksonville’s WR1 this year, so perhaps they scale back his opportunities slightly. But his skill set makes him tough to completely ignore on returns. The Jags also let 14 attempts walk out the door with free agents Jaydon Mickens and Rashad Greene.

Consider Westbrook an enticing pick in the Round 10 range.