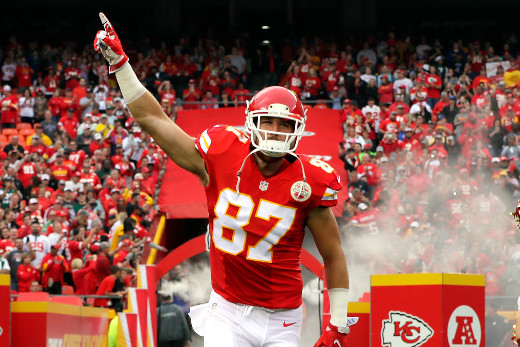 I’d guess I’m up over 100 career FFPC drafts now, including this one and this one just over the past couple of weeks.

But I’m still never completely comfortable in these things. The uniqueness of the FFPC’s rules make the drafts equal parts interesting and challenging.

With 2 flex spots and just 2 required RBs and WRs, there are tons of viable roster constructions. Starting a draft with 4 straight RBs can work. So can 4 straight WRs. Throw in the 1.5 PPR for TEs, and you can even open a draft with something like 1 RB, 1 WR and 2 TEs.

And TEs often fly off the board in the FFPC. That was certainly the case in this draft: a 12-team, FFPC-style best ball league hosted by Football Guys.

The 6 spot is simple in FFPC drafts this year. We’re simply taking whoever is left among a clear top 6: Saquon Barkley, Christian McCaffrey, Alvin Kamara, Ezekiel Ellliott, David Johnson and Travis Kelce. (Melvin Gordon will re-join this group if he reports before Week 1.)

It happened to be Kelce here — and I’m happy to land him. His 348.1 points in this format last year not only led all TEs but also would have led all WRs.

This is about as long as I’ve seen Conner last. Perhaps my fellow drafters are worried about a committee in Pittsburgh’s backfield?

I’m not. The Steelers have now produced a top-6 PPR RB in 5 straight seasons, including Conner’s 6th-place finish (in 13 games) last year.

I opted for Freeman over Aaron Jones here for a couple of reasons:

Freeman is a clear lead back on what should be a top 5 offense this year. He’s just 27 and 1 year removed from a run of 3 straight top-13 PPR finishes.

Like Conner, this is as late as I’ve seen Thielen go in a draft lately.

We’re expecting the Vikings to throw it a bunch less this season under OC Kevin Stefanski. But Thielen will still see a huge share of the targets. He sits 10th in our WR rankings but was the 15th WR off the board here.

This was a tough call between Carson and Robert Woods. In a lineup-setting league, I’d have opted for the Rams WR. But in a 28-round best ball, I prioritize high-volume RBs early — and then stockpiling a bunch of upside WRs later on.

I’m expecting Carson to play a similar role this season to the one that propped him to a RB15 finish (in 14 games) last year.

He’s been a climber over the past few weeks, avoiding the PUP list and participating in camp right out of the gate after last November’s torn ACL.

Kupp is clearly on track for Week 1. And most of the risk with a guy coming off a serious knee injury is negated by this 6th-round, WR28 price tag. Kupp ranked 15th at his position in PPR points per game last year.

We all know about the durability problems. But Watkins’ PPR scoring average in his 8 healthy games last season would have ranked 24th among WRs. I got him here as WR34.

With both Watkins and Kelce rostered, I’ll be soaking up a big chunk of Patrick Mahomes’ production.

Note that with a shallower roster I probably wouldn’t pair a couple of “risky” WRs in Kupp and Watkins. But that’s less of a concern here when I know that I’ll have 9 or 10 WRs.

Even with Kelce, I wanted to lock up another top 13 TE. Reed was the last available.

And I’m glad I snagged him here because a whopping 23 TEs were off the board by the time I was on the clock in Round 10.

Wentz has been lighting up Eagles camp with his deep and explosive group of pass-catchers. He sits 5th in our QB rankings and was the 7th QB off the board here.

There’s always a big QB run — usually between the 9th and 12th rounds — in these FFPC best balls. I was looking to get out ahead of it with this pick. Twenty QBs ended up going in the next 42 picks.

Coutee was healthy enough to play 50+% of his team’s offensive snaps in 5 games, including playoffs, last season. Here were his receiving lines in those outings:

As I’ve mentioned in several spots recently, the Packers have produced a pair of top-36 PPR WRs in in 6 of the last 8 seasons. MVS is the best bet to be the team’s 2nd most productive WR this year — and provide big-play pop with his 4.3 speed.

Carr was already a good bet for positive TD regression after last year’s career-low 3.4% TD rate. Then he added Antonio Brown and Tyrell Williams to his arsenal.

He serves as a James Conner handcuff but should also have some standalone PPR value. The Athletic’s Mark Kaboly expects Samuels to play a big pass-catching role this season.

He could be cut before the start of the season. He could be the Chiefs' Week 1 starter, with Damien Williams struggling to get over his hamstring injury.

I’ve always been a big Stills fan. And he has as good a chance as anyone to lead Miami in targets this season.

I might have drafted more Samuel than any other player so far this summer. He’s available way too late for an early 2nd-round pick with a strong shot to finish among the top 3 on his team in targets.

K and DST time. As always, I’m grabbing 3 of each in these deep FFPC best balls.

I made it a point here to try to “stack” Ks and DSTs and was able to do so with the Colts and Broncos. We know K and DST production is correlated from our DFS research. So why not pair them to increase weekly upside in best balls?

I also snuck Trey Quinn in here. He’s locked in as Washington’s slot receiver and is a real threat to lead the team in targets this year.

TE depth was my biggest weakness at this point of the draft, so I grabbed Jordan Reed’s handcuff.

Uzomah should help my squad if (when) Tyler Eifert misses time this season. In the 12 games Eifert missed last year, Uzomah ranked 15th among TEs in fantasy points.

He has plenty of target competition in what figures to be a run-heavy offense. But Brown is the type of talent who could rise above those issues and return big value at this price tag.

He’d need a Gerald Everett injury to really pop. But Higbee played 72% of the snaps last year for the league’s #2 scoring offense. That gives him some weekly TD upside.