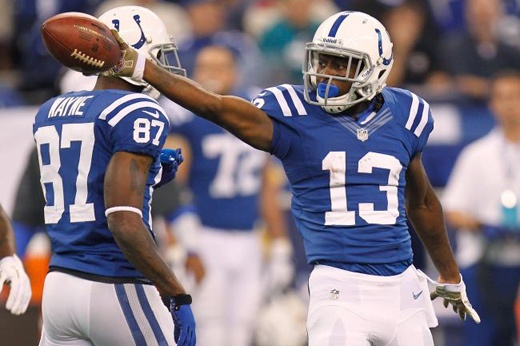 It's Week 5. Most of the NFL has already played 4 games, and the other 6 teams have had their byes. That means many of the fluky-looking early happenings have either changed or turned into trends. It also means we need to look again at who to go after on the trade desk, who to sell off and who's still worth waiting on.

Which guy is about to pop? Which RBs will emerge from the backfield crowds? And what should you do with your 1st-round disappointment? Read on for the answers ...

Ben Tate is expected back from his knee injury this week and will be reinserted as Cleveland’s starting RB. Use that when working to pry Crowell away from his owner.

The undrafted rookie has been electric in his first 3 NFL games. His 5.2 yards per carry ranks 9th among RBs with 25+ carries. It’s also almost a full yard better than rookie teammate Terrance West. Crowell has hit pay dirt on 3 of his 27 runs.

He saw his role grow the last 2 weeks, carrying 11 times in each game. Crowell’s playing time has climbed from 21% of the snaps to 37% to 46%. Prior to last week’s bye, HC Mike Pettine suggested that Crowell has earned more work even with Tate’s impending return.

To our eye, Crowell is Cleveland’s best RB. Tate’s veteran status will land him the lead job as soon as he’s back to 100%. But how long can he stay healthy? And the cream should eventually rise to the top anyway.

It shouldn’t take a whole lot to acquire Crowell. He could be a major asset over the 2nd half of the season.

Our biggest question with Hilton coming into the season was whether he’d see enough targets to be a reliable weekly fantasy option. Through 4 weeks, the answer is a big, fat “YES.”

Hilton has reached double-digit looks in 3 of his first 4 games. In the other, he saw 6 in the 1st half before sitting out the 2nd with a minor ankle injury. Hilton’s 38 total looks lead the Colts and rank 6th among all WRs.

What’s been missing so far are big plays and TDs. Hilton is averaging just 13.2 yards per catch with none longer than 39 yards. He also has yet to find the end zone.

The big plays and TDs are coming, especially with the Colts' passing attack firing on all cylinders. Trade for Hilton now before they do.

His 35-yard TD on Sunday gives you a chance to sell off this rotting carcass of a former 2,000-yard back.

Take away that score and Johnson averaged just 1.8 yards per carry on his other 5 totes. Both of those numbers are telling.

Even with that long score, Johnson is averaging a mediocre 4.1 yards per carry on the season. That trails Chris Ivory by almost a yard-and-a-half. Ivory has also broken more tackles (17 to 6), averaged more yards after contact (3.4 per rush to 2.8) and even been better as a receiver.

HC Rex Ryan suggested prior to Week 4 that Ivory would see an increased role. He ended up out-snapping Johnson 39-19 and out-carrying him 17-6. Considering how both guys are performing, there’s no reason that split should change going forward.

Johnson has devolved into a speed back without much speed. He’s barely a starting option anymore. Use his name value and Week 4 TD to sell him off.

While Asiata was scoring 3 TDs against the Falcons on Sunday, Jerick McKinnon was busy looking like the future of Minnesota’s backfield.

Asiata is a reliable but plodding RB. His per-carry average sits at 3.9, and he’s yet to take any of his 47 carries for longer than 12 yards.

McKinnon, meanwhile, has popped off 6.2 yards per rush. After struggling in his first 3 games, he racked up 135 yards on 18 totes this past week. He had runs of 14 and 55 yards and a 17-yard reception.

It doesn’t take a professional scout to see that McKinnon is Minnesota’s best pure runner. Asiata’s edge comes only in experience and maybe in pass protection. McKinnon looked good in the latter department in Week 4, though. If he can prove reliable there, he should emerge as the Vikings’ lead RB.

That’d leave Asiata as a volume-dependent RB without volume. Deal him now while his value is at its peak.

“… when his next big game comes, put him on the block and send him to the highest bidder.”

We wrote that while calling Smith a “Hold” in our first Buy/Sell/Hold Report. Sunday’s 53-yard, 1-TD game should be big enough to get a bite on the trade market.

Torrey is playing a clear secondary role, totaling just 22 targets. There’s no reason to expect that to change, barring an injury to Steve. That leaves Torrey as a boom-or-bust fantasy play that will hurt your fantasy team more than help.

You could look to deal him straight up right now for a WR like Rueben Randle. Or maybe you package him with another player for an upgrade to a WR2 like Michael Floyd or Michael Crabtree.

There’s no better current example of offensive line play being paramount to a RB’s success.

McCoy averaged a gaudy 5.1 yards per carry last year running behind an offensive line that finished 1st in Pro Football Focus’ run-blocking rankings by a wide margin. This year’s unit sits 11th – and that seems generous. Football Outsiders had the Eagles dead last in run blocking through 3 weeks.

Philly has been playing without RT Lane Johnson for 4 games, G Evan Mathis for 3 games and C Jason Kelce for 1. All 3 guys finished among the top 9 in PFF’s 2013 run-blocking rankings at their respective positions. It’s been tough sledding for McCoy without them.

McCoy hasn’t been as sharp this year, either. His missed tackles forced and yards after contact are down from 2013. Darren Sproles has been much more effective on a per-touch basis.

The majority of the blame falls on the offensive line, though. The Eagles will get Johnson back for Week 5, but Mathis and Kelce are out until the 2nd half of the season. It’ll be up to HC Chip Kelly’s schemes and McCoy’s talent to get the running game back on track.

McCoy is simply too talented to not significantly raise his current 2.7 yards per carry. And he remains the focal point of 1 of the top offenses in the league. McCoy has played 72% of the snaps and averaged 20 touches over the first 4 weeks. He might not be the top-3 player you drafted him as, but we’ll bet on him producing as a top-10 RB the rest of the way. You’re unlikely to get that kind of value for him in a trade right now.

Like McCoy, Thomas was a 1st-round pick in most fantasy drafts this summer. And like McCoy, Thomas has been a major disappointment so far. He’s yet to top 5 catches or 62 yards through 3 games and has just 1 TD. 45 WRs have scored more fantasy points per game.

Thomas has simply looked out of sync. He’s already been charged with 3 drops after totaling 9 all of last year. Thomas is averaging just 10.8 yards per catch and doesn’t have a grab longer than 26.

The good news is that the targets are still coming. He’s seen at least 7 looks in all 3 games and has 27 total. His 9 targets per game rank 12th among WRs. Keep giving this talented a WR that many looks and big stat lines are bound to follow.

Thomas is no stranger to slow starts, either. He actually scored in just 2 of his first 6 games last season before hitting pay dirt in 7 of his final 10.

The Week 4 bye came at a good time for Thomas. Look for him to start producing as the top-end WR1 you drafted him as. His next 3 games are all against bottom-13 WR defenses.