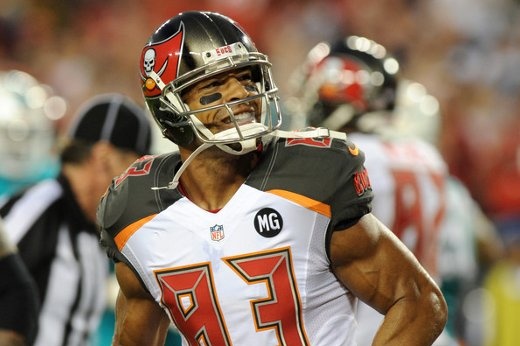 Before we get to this season's final set of players, let's clarify something ...

This is not a list of guys that you MUST acquire, MUST dump or MUST cling to like the lucky hat that your wife keeps trying to throw out. You might be all set for a title run. Your team might have strengths or weaknesses not addressed in this particular article. Or maybe you just really like (or dislike) a specific player mentioned here and don't want to involve him in a deal.

That's fine. Above all, make sure your fantasy team is yours and not ours. Isn't that why you started to play this crazy game in the 1st place?

That said, we're all trying to fortify our rosters for the quickly approaching fantasy football playoffs right now. If you're searching for that last piece or 2 that can push your team over the edge, then we have a couple of upside guys to pursue, a trio of RBs who we think will disappoint the rest of the way and 1 inconsistent wideout who could still provide you big numbers down the stretch.

Bell is sitting outside the top 25 RBs in PPR and non-PPR scoring. He missed 1 game with a concussion, has scored only 3 TDs and is averaging just 3.3 yards per carry. But we like Bell’s odds to get it going down the stretch.

He’s the clear leader in Detroit’s backfield right now. Reggie Bush has been hobbled and ineffective all season. Theo Riddick has impressed in spurts but is just a pass-catching specialist. He has 15 carries for 33 yards on the year.

Bell, meanwhile, has reached double-digit carries in 7 of 8 games, including 4 in a row. And after finishing with less than 3.7 yards per carry in each of his first 3 games, he’s gone for 4+ YPC in 3 of his last 5. His 4.4-yard average this past Sunday was a season high. And it came against a Miami defense that entered the game allowing just 3.8. Bell has also been chipping in with his receiving numbers, catching exactly 2 balls in 5 straight games.

With a healthy Calvin Johnson back in the mix, the Lions offense should be much more productive. That’ll mean more scoring chances for Bell, who remains the team’s primary goal-line back.

And the schedule sets up nicely. After a tough Week 11 draw against the Cardinals, Bell gets 2 games against the crumbling Bears plus 3 matchups with bottom-13 RB defenses.

Garcon is playing a new position in a new offense this season, so don’t expect him to match his 2013 production over the 2nd half of this season. But there are a couple of reasons to believe his numbers will climb.

First, Garcon and the Redskins got QB Robert Griffin back a couple of weeks ago. He looked good running and throwing against the Vikings and should spark the offense down the stretch. Remember that it was RG3 under center for most of Garcon’s big 2013 campaign. The pair hooked up on 89 of 144 tries (61.8%) for 1,017 yards in Griffin’s 13 games last year.

The Garcon owner in your league might not even view him as a starter at this point. Pluck him on the cheap. He’s capable of producing as a WR2 the rest of the season.

Gore was clearly the focal point of San Francisco’s game plan against the Saints this past weekend. He carried on each of the 1st 5 offensive plays and 8 of the first 16. He finished with 23 carries -- his 2nd most of the season -- for 81 yards and a score.

He managed just 3.5 yards per carry against New Orleans, which actually tied for his best mark since Week 5. He’s struggled to 3.0 yards per carry over the past 4 games combined. That’s way down from his 4.7-yard average in the first 5.

This isn’t the 1st time Gore has slowed down after a hot start. Just last year, he averaged 4.3 yards per carry in the 1st half of the season but just 3.8 in the 2nd.

San Francisco kept riding Gore last season because they didn’t have a better option. That’s not the case this year. RB Carlos Hyde is a big-time talent and seems to be getting more comfortable. After averaging just 3.2 yards per carry in his first 6 games, he’s ripped off 7.3 in his last 3. Hyde’s workload hasn’t grown -- just 9 carries over the past 3 games -- but don’t be surprised if it does down the stretch.

On top of that, Gore has a tough remaining schedule. Three of his next 5 games come against top-7 RB defenses. Note that Gore gets a leaky Giants run D this Sunday. So if you can’t get a good return this week, you could hang on to him for 1 more and hope he posts another good line vs. the G-Men.

In another funky Thursday night game, West and Tate both hit pay dirt against the Bengals. So did RB Isaiah Crowell. The trio combined for 169 yards on 48 carries.

Two problems with those numbers:

1. Cleveland’s RBs averaged just 3.5 yards per carry. That’s even more disappointing when you consider that Cincinnati entered the game allowing 4.8. The Browns running game has struggled mightily since losing C Alex Mack. The RBs have mustered just 2.6 yards per carry in 4 games without Mack.

2. 48 carries is a total the Browns RBs are unlikely to approach again this season. A historically bad showing from Bengals QB Andy Dalton helped Cleveland get out to a comfortable early lead and ride the run game all night. Over their first 8 games, the Browns’ RBs averaged 28.4 carries.

Despite the big Week 10 numbers, we’re still looking at an inefficient committee backfield. That’s not a recipe for fantasy success.

Tate is the best “sell” right now. He’s been downright pathetic in his last 5 games, mustering just 2.3 yards per carry. He failed to top 3.4 YPC in any of those outings and was held under 2.5 in 3 of them. Cleveland is looking to scale back his role in favor of the more-impressive rookies. Tate finished 2nd among the 3 RBs in snaps in Week 10, but last with just 10 carries.

West looks more valuable than Tate the rest of the way. He’s led the backfield in snaps and carries in 2 straight games. But his 41 totes in those outings have resulted in just 142 yards -- an ugly 3.5 average. That’s certainly not the type of performance that will have West run away with the lead role. Tate will stay in the mix. And despite his ball-security issues, Crowell remains the most talented RB on the roster. He’s leading the trio with 4.6 yards per carry on the season.

HC Mike Pettine confirmed on Friday that he’ll continue to rotate his backs.

"It will still come down to the game plan and how the week of practice goes,” Pettine said.

That means none of Cleveland’s 3 RBs is likely to reach his fantasy potential -- and that Tate and West are sell candidates coming off productive games.

Jackson has been 1 of the best TD bets at the WR position for the past 6 seasons. Outside of a 5-game 2010 campaign (when he scored 3 times), he posted at least 7 TDs in each of the other 5 years. In his first 2 seasons as a Buc, he popped in 8 and 7 TDs, respectively.

It’s not for lack of opportunity, though. Jackson has seen 9+ targets in 7 of 9 games and double-digit looks in 5 of his last 6. His 88 total targets rank 6th among WRs.

Jackson has never been a high-catch-rate WR, and that’s continued this season. He’s hauled in just 45% of his targets. He’s also averaging a career-low 13 yards per reception. Still, he’s on pace for a solid 71 grabs and 921 yards.

It’s the lack of TDs that’s killing his fantasy value. But considering his 6’5 frame and TD-scoring history, Jackson is a good bet to hit pay dirt a few more times the rest of the way. He’s posted a TD rate of at least 9% in 6 straight seasons. Through 9 games this year, it sits at 5%.