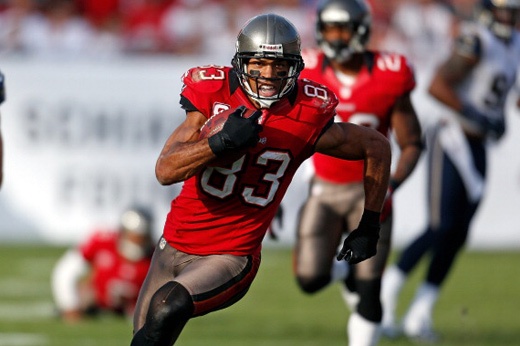 We’re just 2 weeks into the season.  It’s too early to make sweeping conclusions and poo poo on everything we thought we knew prior to kickoff.  Eddie Royal won’t finish as a top 10 fantasy WR.  Trent Richardson will be just fine.

The theme of this 1st Buy/Sell/Hold Report is taking advantage of over-reaction.  Plenty of proven studs are off to slow starts.  Now is the time to acquire these guys at discounted prices.

Manning has tossed a league-high 7 INTs through 2 weeks.  Play that up while making a trade offer for him.

Because Manning is also sitting 2nd in the league with 812 passing yards.  His 5 TDs are tied for 5th.  And his 91 pass attempts are tied for 4th.

With the Giants’ running game stuck in the mud, Manning will continue to chuck it often.  And the numbers will keep coming thanks to an ultra-talented WR trio of Victor Cruz, Hakeem Nicks and Rueben Randle.  The INTs will cool off, too.

Volume should make Manning a reliable weekly starter the rest of the way.  And he carries top 10 upside.

He’s opened the season with a pair of sub-80-yard, TD-less outings.  He’s averaging just 3.4 yards per carry.  He’s sitting outside the top-25 RBs across fantasy formats.

The T-Rich owner in your league might be panicking.  See if you can take advantage.

Richardson has faced the stout run defenses of the Dolphins and Ravens in his first 2 games.  Both were among the top 10 in yards per carry allowed last year – and are likely to finish up there again in 2013.

The schedule gets easier for T-Rich going forward.  The next 4 weeks include games against the Vikings, Bills and Lions, who are all sitting in the bottom half of the league in run defense through 2 games.

Of course, Richardson’s workload should make him matchup-proof anyway.  The Browns admitted that they didn’t get their stud RB enough touches in Week 1.  Richardson got his paws on the ball 23 times in Week 2 (18 carries, 5 catches).  Expect plenty more 20+ touch games going forward.

Plus, the return of WR Josh Gordon from his 2-game suspension should open up more running room for Richardson.  TE Jordan Cameron is already emerging as a dangerous field-stretcher.

Richardson is still a good bet to finish as a top 10 RB.  Now is the time to buy him on the cheap.

Johnson is averaging just 3.3 yards per carry through 2 games.  We can safely expect that number to climb in the coming weeks.

Johnson has opened against a couple of tough run defenses in the Steelers and Texans.  This is a guy who averaged at least 4.0 yards per carry in each of his first 5 seasons and 4.7 for his career.

Yeah, he’s lost a step.  But we’ll comfortably bet on Johnson finishing this season with a per-carry average north of 4 yards.

And the workload is definitely there.  Johnson is the clear centerpiece of Tennessee’s conservative, run-heavy offense.  He’s toted it 25 times in each of the first 2 games.  Only Doug Martin has more carries so far.

Johnson hasn’t gotten involved in the passing game yet – just 1 catch so far – but that should change.  He’s hauled in at least 36 balls in all 5 of his pro seasons.

Big games are coming for Johnson.  And his workload will make him a reliable weekly RB2 for your fantasy squad.

It’s not going to cost much to acquire Ivory right now.  He’s opened the season in a timeshare with RB Bilal Powell, carrying just 22 times for 67 scoreless yards through 2 games.  61 RBs have scored more fantasy points than Ivory, including Powell.

A hamstring injury that cost Ivory a big chunk of August is the primary culprit.  The Jets are wisely easing their new RB into the action.  Ivory carried just 10 times for 15 yards in Week 1.

But his role grew – and he looked better – in his 2nd game.  Against a solid Patriots run defense, Ivory busted off 52 yards on 12 totes, running with his usual bulldozing mentality.

Ivory is clearly the Jets’ best RB.  And we expect the workload split to reflect that going forward.  Ivory should be seeing 15+ touches per game very soon.

The line remains the strength of the Jets’ offense.  And QB Geno Smith, despite the INTs, is at least giving defenses the threat of a passing game to worry about.  That’ll make it harder for defenses to consistently stack the box to stop the run.

We recommended avoiding Foster in fantasy drafts this summer.  Nothing we’ve seen these first 2 weeks has us feeling any differently.

Workload has at least supported Foster as a RB2.  He’s racked up 37 carries and 7 catches through 2 games.  Throw in a Week 2 TD and he’s sitting 13th among RBs in fantasy points.

But can the Texans really keep feeding Foster when he looks like the 2nd best RB on the team?  Ben Tate is averaging a stellar 8.2 yards on 18 carries so far.  He busted off a 60-yarder in Week 2.  But take away that run and he’s still at 5.2 yards per carry.

Tate is begging for more work, while Foster looks like a guy in clear decline.  We have to believe the division of labor will begin to reflect that going forward.

Coming off an 85-yard, 1-TD effort, Foster is a guy to sell high right now.

Richardson is still St. Louis’ clear lead back … for now.

He’s racked up 30 carries and 10 catches through 2 games.  Richardson is averaging a solid 7.8 yards per catch.  But he’s been held to just 3.3 yards per carry.

Richardson is a reliable pass-catcher and a dangerous player out in space.  But he doesn’t have the size or skill set to get the job done as a feature runner.  We have to believe that RBs Isaiah Pead, Zac Stacy and/or Benny Cunningham will start to see more action soon.

Even if Richardson does hang on to the feature role, the schedule is about to get tougher.  The next 6 weeks include games against the Cowboys, 49ers, Texans, Panthers and Seahawks.

Richardson’s value might be at its peak right now.

But it’s only a matter of time before Tampa’s QB mess catches up with Jackson.  Josh Freeman is on borrowed time. His coach doesn’t like him.  (His teammates might not either, depending on which story you believe about the Bucs players stripping Freeman of his captaincy.)  And Freeman looks completely out of sync in the offense.  He’s completed just 45% of his passes for 335 yards through 2 games.

A free agent this offseason, Freeman is in his last year as a Buc.  Don’t be surprised if the team gives rookie QB Mike Glennon a look later this year.  That wouldn’t be good news for Jackson.

This passing game is a mess. Ridding yourself of its #1 WR -- for the right price -- might be a good idea.

RG3 is clearly operating at less than 100%.  He’s favoring his surgically repaired knee when he throws and runs.  And his decision-making has been rusty -- likely a result of sitting out the preseason.  Through 2 games, Griffin has tossed 3 INTs after throwing just 5 all last season.  And he’s rushed for only 25 yards, as Washington has essentially abandoned the read-option.

Still, Griffin is sitting inside the top 10 fantasy QBs thanks mostly to garbage-time production.  The ‘Skins have played from way behind in each of their first 2 games.  That’s allowed RG3 to compile 649 passing yards and 5 TDs, and he's still completing 63% of his passes.

Despite an off-kilter start, Griffin is keeping fantasy owners satiated.  We don’t necessarily want to rely on that continuing going forward.  But at the same time, Griffin should only get better as that knee gets healthier.

Rivers has been 1 of the biggest surprises of the first 2 weeks.  After looking washed-up the past couple of years, he’s opened this season by completing 66% of his passes for 614 yards with 7 TDs and 1 INT.

Now, those numbers have come against the shaky pass defenses of Houston and Philly.  Rivers will certainly cool off.  We’re still not high on his supporting cast.  The O-line is still a question mark and the pass-catching corps is thin.

But Rivers’ upcoming schedule doesn’t present any daunting challenges.  The Titans in Week 3 might be his toughest draw until November.  Following Tennessee, Rivers gets the Cowboys, Raiders, Colts, Jaguars and Redskins.  He’s worth hanging on to as a potential matchup starter during that stretch.

After that, it might be time to sell high.

Rice’s 2013 campaign is off to a nightmarish start.

He opened with a mediocre 71-yard, 1-TD outing.  He was limited to just 45 scoreless yards in Week 2 before leaving with a hip injury.

It sounds like Rice avoided a serious injury, though.  We still like this guy as a top 10 fantasy RB when healthy.

Rice has opened with a couple of tough matchups against the Broncos and Browns.  Each team sports a top 6 run defense through 2 weeks.  Rice is averaging just 2.9 yards per carry, but that’s actually 0.1 better than Bernard Pierce’s mark.

Speaking of Pierce, he’s taken on an increased role this season.  As expected.  But Rice remains the focal point of Baltimore’s offense.  He had 20 touches in the opener and was well on his way to another 20+ before going down in Week 2.

The Ravens’ sputtering passing game is a concern.  But Rice is used to being the focus of opposing defenses.  And the passing-game struggles should only mean more touches for Rice, both as a runner and receiver.

It’s tough to recommend trading for Rice until we learn more about his hip injury.  But now is not the time to sell this perennial fantasy stud. 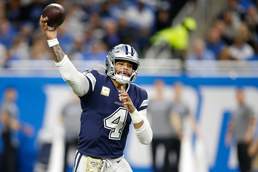 You've seen the rankings. Now see where the biggest splits reside within the top-32 QBs. 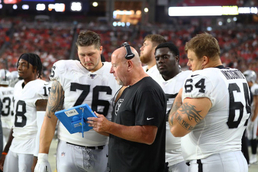 Three offensive lines poised to elevate their skill guys; three with potential to hold them back. 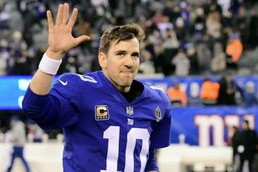 The Eagles are coming off an embarrassing loss in Miami. The Giants are going back to their old flame, with Daniel Jones hurt. Where should you go with your Showdown lineups?