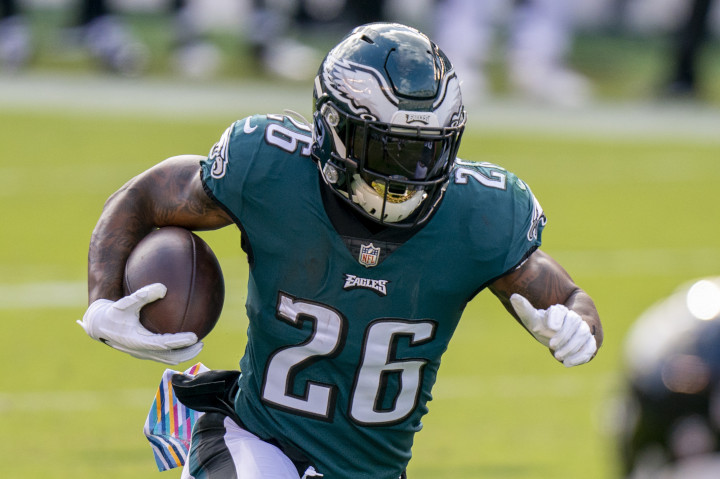 Simply put, Sanders isn’t getting the rock enough. He ranks 31st among RBs in carries, behind guys like Latavius Murray, Jamaal Williams and Tony Pollard.

Sanders’ underlying metrics look much better. He ranks 7th among RBs in total snaps and has been on the field for 68.7% of the Eagles’ offensive plays. That number is climbing, too, with Sanders posting season-high snap rates the past 2 weeks (75% and 83%).

The Eagles just aren’t running it enough. They rank 23rd in run rate, 28th in situation-neutral run rate and 28th in carries. QB Jalen Hurts, of course, has handled a bunch of those carries. Eagles RBs as a group sit 2nd-to-last in total carries (78).

The Eagles should be running it more. According to Football Outsiders DVOA, they’re 1 of just 5 teams that have been more efficient running than passing so far this season. In fact, Philly ranks 3rd in Football Outsiders’ rush offense DVOA.

Will the Eagles start running it more? We’ll see. But if they do, Sanders’ fantasy production will spike. And it shouldn’t cost much to acquire him right now.

Diggs delivered a 9-89-1 receiving line in Monday night’s narrow loss to the Titans, his best fantasy outing yet this season. That might leave you thinking you missed the “buy” window on the Buffalo star.

Yet even with that game in tow, Diggs still sits just 17th among WRs in total PPR points. He’s tied for 6th among all wideouts in targets, though. Diggs’ catch rate sits at its lowest level since his rookie year and 12.7 percentage points short of last year’s rate. But he still sits tied for 8th among WRs in receptions. Diggs has also tied for 8th in the league -- across positions -- in end-zone targets (according to PFF). And he ranks 5th at the position in our Expected Fantasy Points for the year.

Sure, it might have been easier to get Diggs a week ago than it is right now. But the fact that he’s on bye can help, especially if the Diggs owner in your league has a need on this 6-team bye.

If Monday night was merely the start of his rebound, then you’ll want to be on board for the rest of it.

Allen sits 3 PPR points per game short of last year’s average and 1.7+ points shy of any of his previous 3 averages. But he also displays no reason for real concern.

Allen sits tied for 6th among WRs in targets on the year. He’s drawing targets at a rate higher than any of the past 3 seasons. He has also seen red-zone targets and targets inside the 10-yard line at a higher per-game rate than the previous 3 years.

All of that goes to show that Mike Williams’ rise hasn’t necessarily come at Allen’s expense. There’s enough to feed both wideouts. In fact, Allen sits just 1 spot behind Williams in our expected fantasy points through Week 6: 11th among all WRs.

Gibson has been dealing with what he said is a stress fracture in his shin since Week 4. He reportedly struggled with it in Sunday’s loss to Kansas City.

"We'll see how he is,” HC Ron Rivera said after the game. “We did take him out at the end of the game because he was struggling with it a little, so we have to be careful and see how he responds. I don't know much more than that. We'll see how he is [Monday] morning."

The game saw Gibson collect season lows in playing time, carries and receiving yards. Through 6 weeks, he ranks 38th in Football Outsiders’ rushing DYAR and 32nd in DVOA among 40 qualifiers. His Pro Football Focus rushing and receiving grades are down vs. last year.

The rough Week 6 probably doesn’t leave Gibson at his highest valuation. But we’d go ahead and try to move the Washington RB and his red flags if you can get at least solid value. Former Chargers head team Dr. David Chao said 2 weeks ago that Gibson’s stress fracture is “unlikely to improve this entire season.”

Hopkins is still very good. And he’s the lead WR in 1 of the league’s top offenses. He sits 7th in our Rest-of-Season WR Rankings. So this is certainly not a sell-for-whatever-you-can-get order. It’s a true sell high.

Because Hopkins isn’t the target dominator that he’s been in the past. He currently ranks 38th among WRs in targets. His 19.5% target share would be his lowest since his 2013 rookie campaign -- and way down from his 27.8% share last year.

And it’s not like Hopkins has been crushed by 1 or even 2 down weeks. He’s already finished with a sub-20% target share in 4 games this season. He had just 3 such games all last season.

With WRs A.J. Green, Christian Kirk and Rondale Moore playing well -- and TE Zach Ertz now added to the mix -- Hopkins is unlikely to return to his target-hogging ways. And that makes him more of a low-end WR1 than true fantasy difference-maker.

Chase is good. But he isn’t THIS good.

The rookie ranks 6th among WRs in PPR points. But he’s just 33rd in targets and 27th in our Expected Fantasy Points metric. Chase hasn’t even been the clear #1 WR on his own team so far. WR Tee Higgins has out-targeted him 28 to 27 in their 4 games together.

Chase has been leaning on incredible efficiency. He’s averaging 20.5 yards per catch, 13.5 yards per target and has scored on 18.5% of his receptions.

So unless you believe he’s already the best WR in NFL history, he’s in for some regression. (He’d probably be in for regression even if he was the league’s best WR.)

We’re still expecting Chase to produce as a rock-solid WR2 the rest of the way. But if you can get WR1 value for him in a trade, you should cash in.

Sutton’s played well over the past 2 weeks, racking up 15 catches, 214 yards and 2 scores. But he’s done so on 25 targets, brought on by 2nd half deficits and 87 Teddy Bridgewater attempts.

We can’t reasonably expect a 28.7% target share going forward. Not with Jerry Jeudy having a real chance to return Week 8 vs. Washington. And not with Tim Patrick playing like a legit starter. (Patrick actually posted 4.6 more PPR points than Sutton through 4 weeks.)

Sutton also has the 6th toughest WR strength of schedule. It's not a primary concern, but it’s another factor in Sutton likely dropping off his recent WR1 pace and becoming more of a mid-pack WR2.

Swift ranks 7th in PPR points, but he actually sits 3rd in our Expected Fantasy Points model. He leads all RBs in receiving yards (295, slots 2nd in targets (42) and is tied for 1st in catches (34).

Interestingly — and somewhat predictably — Swift’s scored all 4 of his TDs when trailing. Each score has surfaced in the 2nd half. In fact, the 2nd half is home to 74% of Swift’s PPR production. Yep -- an 0-6 Lions squad that’s -63 in scoring differential has actually helped Swift’s fantasy production.

Here’s the thing: Detroit’s outlook doesn’t look any better going forward. They're still weak on defense, thanks in part to a flurry of injuries. And their pass-catching depth looks like the league's worst.

Week 7 turns up a major mismatch at the Rams. L.A. currently enters as massive 16-point favorites. Looking ahead, the Lions are underdogs in each remaining game. So game script should remain favorable for Swift to perform as a strong PPR asset.

An ugly RB landscape league-wide only adds to the case for holding Swift.