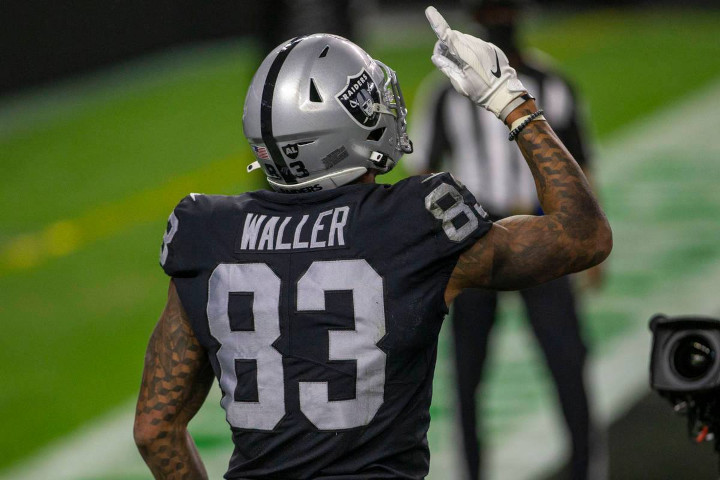 It’s been a lost season for Julio so far. A lingering hamstring injury has cost him 3 games and limited him to less than half of the offensive snaps in 2 others. He’s hit double-digit fantasy points just once.

In other words, it shouldn’t take much to acquire Jones right now.

Plenty of upside remains. The Titans are still desperate for a legitimate #2 option in the passing game behind WR A.J. Brown. That’s even more true with RB Derrick Henry expected to miss the next 6-10 weeks.

Tennessee’s offensive identity figures to morph from run-heavy to at least pass-leaning (and maybe even pass-heavy) without Henry. The Titans currently rank 29th in pass rate, 30th in situation-neutral pass rate and 22nd in pass attempts per game.

Expect all those marks to climb significantly as long as Henry is out. And that means more opportunity for Jones -- if he can just put the hamstring problem behind him.

Waller was on bye last week. He missed the game before that with an ankle injury. And in the 5 games prior, he averaged a relatively modest 4.6 catches, 54.6 yards and .2 TDs.

So the Waller owner in your league is probably disappointed right now. Try to capitalize, because Waller could be in for a big 2nd half.

Waller’s volume should get a boost with WR Henry Ruggs likely out of the picture for the rest of the season. He was averaging 5.1 targets per game.

And the upcoming schedule is sweet:

Four of those 6 games are against teams sitting in the bottom half of the league in Football Outsiders’ pass defense rankings. That includes 2 matchups with the Chiefs (30th) and 1 with Washington (31st).

Goedert’s usage sans Zach Ertz has been as strong as hoped.

Goedert’s snap rate dropped to 68% in last week’s blowout win over the Lions. But he ran a route on 85% of pass plays and, most importantly, was targeted on a whopping 50% of QB Jalen Hurts’ passes.

Luckily for you (if you’re not already a Goedert owner), the production hasn’t been elite yet. Goedert posted a 3-70 line in Week 7 and a 6-72 in Week 8. That could give you one last chance to get your hands on a guy who should score as a top-6 TE the rest of the way.

Hurts finally posted a fantasy dud. And of all teams to dud against … it was the Lions.

And with 71 Hurts rushing yards…

That single game isn’t what makes Hurts a sell. But call it regression to the mean following some lopsided production.

Through 8 games, Hurts has tallied 65% of his fantasy points in the 2nd half. A massive 38% has come in the 4th quarter alone. We’ve seen a heavy dose of garbage time production thanks to a hot-and-cold team that’s still finding its legs under new HC Nick Sirianni.

Philadelphia’s schedule provides another mark against the 2nd-year QB. They show up with the 4th toughest schedule according to our numbers. Plus, there’s still a bye to come in Week 14.

Here’s the nightmare scenario: Philly pulls the plug on the Hurts experiment and takes a look at new backup Gardner Minshew. We’re not calling it likely. But the chances at least “grew substantially” — the words of beat writer Dave Zangaro — following the trade of Joe Flacco.

If you drafted this guy, you’ve been waiting nearly 2 months for him to help you out. And if you picked him up off waivers on the tails of the 1st Mike White game to start him Sunday in your struggling backfield, then you’re probably falling in love. He’s not likely to keep this going, though.

Carter has tallied 9 and 13 targets the past 2 games. That’s 2 of the 17 total RB games of 9+ targets we’ve seen all season. Only Carter, D’Andre Swift and Austin Ekeler have reached that level twice, and no RB has enjoyed 3 such games so far this year. Swift and Najee Harris are the only 2 RBs averaging more than 6 targets per game this season. Last year found only Ekeler, J.D. McKissic and Alvin Kamara topping 6 targets per game.

We’d certainly take that level from Carter, but his outlook is far from clear.

Mike White stepping in at QB 2 weeks ago and then starting vs. Cincinnati moved the passing game shorter. His 5.1 intended air yards per pass attempt sit 3.6 short of Zach Wilson’s average. He has targeted RBs a lot more. White has targeted RBs on 41.6% of his attempts over the past 2 weeks. Wilson, on the other hand, has targeted RBs on just 17.7% of throws so far this season. Missing WR Corey Davis for the Bengals game certainly didn’t hurt Carter’s target count, either.

The Jets have also thrown a lot in total over the past 2 games, logging 42 and 49 pass attempts after averaging 34.2 over the first 5 contests -- with no game of more than 37.

We certainly expect Carter to lead the Jets backfield in touches and fantasy production going forward. So if you find your league similarly skeptical of the rookie continuing his roll of the past 2 weeks, then hold Carter and use him.

But coming off RB9 and RB1 PPR finishes the past 2 weeks, this seems like the perfect time to test just how much you might be able to get for Carter.

But here’s the kicker: New England’s faced a favorable schedule of late, with 3 of those 4 opponents turning up positive rushing matchups. Harris has also relied on TDs to really pop for fantasy. And his passing-game usage remains weak. On the year, he’s running just 9 routes per game. And his 12 targets rank 49th at the position.

We’re through an 8-game sample now — 5 without James White — so we don’t anticipate much change there. (Harris owns only 5 catches sans White.)

As for New England’s upcoming schedule — it’s not ideal. In fact, it’s the league’s toughest, with future dates against Carolina, Buffalo (x2) and Indianapolis. The Pats also have a Week 14 bye.

We’re not knocking Schultz for his 2-catch game Sunday night against the Vikings. That game, of course, was played alongside backup QB Cooper Rush.

We’re not even that worried about Dak Prescott’s calf injury. It’s a minor concern, sure, but one look at him in pre-game warmups in Minnesota showed he could have suited up. Barring a setback, he’ll return for Week 9.

Our main issue is the impending return of Michael Gallup. In 4 full games alongside Dak last year, Gallup totaled 24 targets (6 per game). Amari Cooper easily led the group with 51 targets over that stretch, but notice that Gallup wasn’t far behind CeeDee Lamb’s total of 28.

The 25-year-old Gallup looks like 1 of the league’s better 3rd WRs when healthy. And since he returned to practice prior to the Vikings game, we expect him to get back up to speed shortly.

As long as you have another viable TE rostered, Schultz is worth shopping around.

HC Pete Carroll said just before the weekend that Carson’s injured neck had not improved. “He’s got to make a turn here to show us that he’s feeling better and good enough to really go for it,” Carroll said.

This week, though, Carroll said Carson “wants to go for it next week,” against Green Bay after the Week 9 bye. In that same tweet, Gregg Bell of the Tacoma News Tribune said that Carson will need to check in with doctors for clearance before returning to the field.

So we head into the bye not knowing whether Carson will return as a fantasy starter for Week 10 or miss the rest of the season. If you can manage to keep him around, taking a shot at the former is worth the risk of the latter.

Getting a version of Carson near full strength could be a difference maker over the 2nd half.

There’s not much precedent for the situation Ridley presents to fantasy managers right now. We can, at least, look to Eagles RT Lane Johnson, though.

Johnson took leave earlier this season to sort through some mental-health issues, just as Ridley announced Sunday that he’s doing.

Johnson missed 3 games and has since returned to start the past 2. Does that mean we can expect something similar from Ridley? None of us knows.

So why bother bringing him up here? It’s easy to get frustrated after unexpectedly losing Ridley the morning of the Week 8 clash with Carolina -- and then learn that he’ll remain out indefinitely. But don’t let that frustration lead you to sell him at pennies on the dollar.

Perhaps we won’t see Ridley again for a while. Or maybe we’ll see him return after another game or 2. And if/when Ridley does return, he’d still be the buy-low candidate we highlighted on last Thursday’s podcast: a guy averaging 10.4 targets per game, with positive regression coming to his numbers.