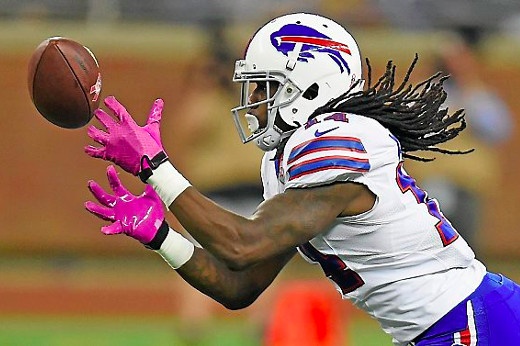 It’s Week 11. There aren’t many secrets left at this point of the season — and not many lucrative trades to be made. So the 5th and final Buy/Sell/Hold Report is light.

You’ll notice that the recommendations are largely matchup-based. With just 6 weeks left in most fantasy leagues, each game represents 16.7% of the remaining schedule. Acquiring a guy with a few juicy matchups could make a big difference for your squad.

We hear a lot of bitching and moaning about Stewart’s TD upside. And there’s some validity to it. Stewart has watched QB Cam Newton score 5 rushing TDs from the 1- or 2-yard line. RB Mike Tolbert has also punched in a couple of 2-yard scores.

But Stewart has 4 TDs of his own, which ranks 14th among RBs. And they’ve all come within the past 5 weeks.

Stewart has been rolling over that span. After seemingly being limited by minor injuries in Carolina’s first 4 games, Stewart has carried 20+ times in all 5 outings since his Week 5 bye. He’s racked up 110 carries, 442 yards and 4 TDs during that stretch. The carries and yardage rank 2nd behind only Adrian Peterson. The TDs are good for 3rd.

Stewart ranks 6th among RBs in non-PPR fantasy points over that span and 11th in PPR, despite totaling just 3 catches.

If the Stewart owner in your league is pissy about Newton and Tolbert’s vulturing, trade for a guy who should produce as a borderline RB1 the rest of the way. Carolina has the easiest remaining RB schedule. That includes games against Atlanta’s league-worst RB defense in Weeks 14 and 16.

You’re looking for difference-makers at this point in the fantasy season. Watkins fits that description, as he reminded us a couple of weeks ago.

Watkins caught all 8 of his targets for 168 yards and 1 score against Miami back in Week 9. Excitement surrounding the 22-year-old likely diminished after last week’s 3-14 line against Darrelle Revis. But Watkins looked healthy, and in the process, showed off the type of talent that can threaten even elite CBs.

Here’s how Watkins assessed his play vs. Revis.

"I think I played hard," he said. "What people don't notice is there's a lot of things going on the game, whether pass protection didn't hold up, whether (Taylor) just looked to the right side and (Robert) Woods was open. You don't get too many chances against great cornerbacks like Revis. The dude's a mastermind at what he does. He knows what you're doing before you do it. The only thing you can do is know that you're not going to have too many opportunities, so when you do you have to make them."

OK – so Watkins wasn’t a fantasy factor against one of the NFL’s top cover corners. The good news is that he draws one of the best WR schedules going forward:

There’s certainly some downside in Buffalo’s run-heavy offense. Only the Panthers and Vikings have run the ball on a higher percentage of their plays than the Bills. Still, this Buffalo offense severely lacks playmakers behind Watkins. A lack of competition for targets helps fortify his rest-of-season role.

If you can play up Watkins’ injury history and rough Week 10 to his current owner, it’s possible you can acquire Buffalo’s go-to target at a low-risk WR3 price.

Denver's defense has been terrific for you in fantasy so far. Well, at least it was through the 1st half of the season.

Over the past 3 weeks, the Broncos have forced 0 turnovers. The 1st game in that stretch featured a dominating defensive performance against Aaron Rodgers. The next 2 found them allowing 27 points to a previously struggling Colts offense and then 29 to the ho-hum Chiefs. Peyton Manning's (injury-fueled?) collapse badly hurt the defense Sunday, but such offensive issues have been occurring all year -- and Brock Osweiler's not a great bet to end them.

More importantly, though, Denver's not far ahead of the rest of the startable fantasy defenses. The Broncos started tremendously, finishing each of the 1st 3 weeks and 3 of the 1st 4 among the top 2 in fantasy points -- according to ESPN scoring. But their other 5 games have produced just 1 top-5 outing.

Last Sunday against the Chiefs marked the 1st time that Denver has finished lower than a tie for 7th, so we're not calling this a fading unit. But Omar Bolden's punt-return TD saved the defense's fantasy day at Indy, and the Broncos have totaled only 3 sacks over the past 2 weeks while playing much of that time without OLB DeMarcus Ware. Still, Denver has allowed the 3rd-fewest points in the league so far and the fewest yards per play.

The remaining schedule could challenge that, however. This week's opponent, Chicago, enters just 21st in the league in points per game and 20th in yards per play. But all 6 games beyond that feature offenses that rank among the top 7 in yards per play. None ranks lower than 15th in points. Even a strong Denver D will find some fantasy risk in that stretch.

So take a chance that you can find a league mate who will look at the season point totals and believe that fantasy's top-scoring defense will give him/her a boost down the stretch. Offer up the Broncos along with a position player for a decent defense and a position-player upgrade in return. Top D/ST targets include Cincinnati, Minnesota and Kansas City.

Instead, he ripped Denver for 161 total yards and 2 scores. It was West’s 3rd straight game with 120+ yards and 1+ TD, so the buying window has likely closed. But if you own this guy, hang on tight.

Take that workload, West’s sneaky-good talent (he’s averaging 4.2 yards per carry and 15.1 yards per catch over the last 3) and the 4th easiest remaining RB schedule, and you’re sitting on a guy who could post RB1 numbers down the stretch.