That'll be your lead-in to the Monday Night Football showdown between the Washington Commanders and Philadelphia Eagles, if you check the value charts below.

These 2 squads played already this season, and Jalen Hurts delivered his biggest passing line to date: 340 yards and 3 TDs. He found each of his top 3 targets for scores in that one. DeVonta Smith racked up the big yardage, but A.J. Brown stayed right with him in targets -- and Dallas Goedert might have been closer if he hadn't left for a stretch with a minor injury.

The Philly run game had a predictably tougher time in that contest, and Washington enters the rematch 2nd-best in Football Outsiders' run-defense DVOA.

McKissic (neck) is set to miss his 2nd straight game. But Dotson (hamstring) carries no injury designation and will see his 1st action since Week 4. Will the rookie's return cut into the mojo McLaurin has rediscovered with Taylor Heinicke over the past 3 games? That's tough to know, given that we have yet to see Heinicke and Dotson in a game together.

There are other questions to answer, but let's get to the value charts ... 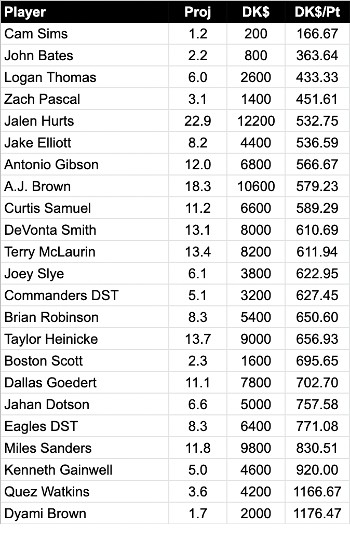 Cam Sims and John Bates might lead the way among cheap Washington pass-catchers here, but Logan Thomas looks like the 1st one to bring actual upside into this game.

Sims' role figures to dissipate -- and perhaps even evaporate -- with Dotson back in the lineup. Sims played 29 total snaps and tallied 3 matchless targets through the season's 1st 4 games, with Dotson on hand. He still has yet to catch more than 1 pass in a game.

Bates has maintained decent playing time with Thomas back the past 2 weeks, but also totaled just 3 looks, 2 catches and 11 yards over those contests.

Thomas has 0 receptions over those same 2 games, but his route rate climbed to 69% in his 2nd game back from the calf injury. TE also happens to be the friendliest matchup for a tough Eagles defense, according to our adjusted fantasy points allowed -- at least relative to the rest of the league.

Philly has actually been a little friendlier to RB scoring, by the numbers, which adds some upside to Antonio Gibson. He gets the easy nod over Brian Robinson Jr. despite a heftier salary both because Gibson has been more efficient with his yardage and TDs, and because his receiving role offers some workload protection in case this game gets out of hand in favor of the home squad.

Finally, WR Curtis Samuel draws the most favorable matchup among the WRs. Philly will be without slot CB Avonte Maddox, leaving Josiah Scott to start in his place. Scott has allowed a 132.9 passer rating on passes thrown his way so far, compared with Maddox's 89.4. 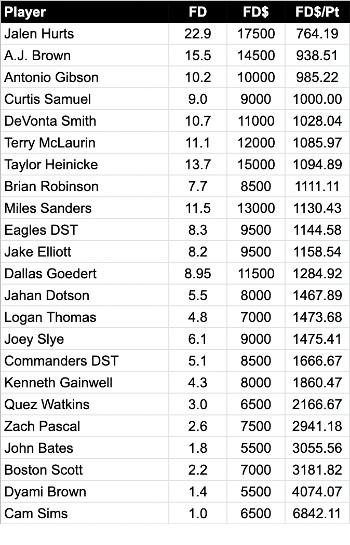