This will be an interesting matchup.

The Packers have been riding their run game hard lately, racking up more than 200 yards on the ground vs. both the Bills and Cowboys within the past 3 games. Can they continue that on Thursday Night Football?

It won't be easy. Tennessee arrives as the league's #1 run defense by Football Outsiders DVOA and the 5th-toughest matchup for RB scoring by our adjusted fantasy points allowed. Saquon Barkley racked up 164 rushing yards on the Titans in Week 1. All other RBs have averaged 3.1 yards per carry against them.

And they're expected to get star DT Jeffery Simmons back after he missed last week with an ankle injury.

Green Bay's passing offense had a new star emerge Sunday against the Cowboys, with 2nd-round rookie WR Christian Watson scoring 3 times. Just as importantly -- perhaps more so for fantasy football projections -- he led the team with 8 targets, 40% of Aaron Rodgers' total attempts for the game.

The Titans have improved in pass defense as well but still arrive as the 3rd-best scoring matchup for WRs on the season.

Let's check the values for this showdown ... 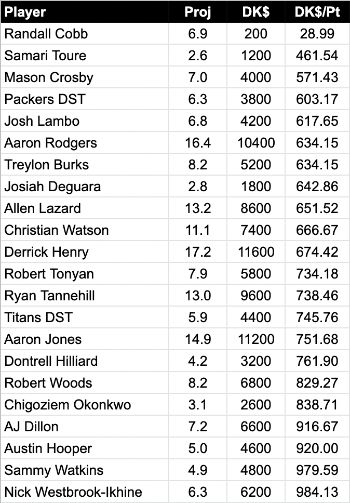 Randall Cobb isn't a must play ... but he's pretty close. This is obviously assuming he's active for the game, but that's the expectation.

Cobb hasn't played since Week 6 because of the ankle injury that landed him on IR. But the game before that delivered season highs in targets (13), catches (7) and yards (99). Good luck finding other minimum-priced players with that kind of ceiling.

Of course, Cobb isn't likely to get back to that level against Tennessee. But his averages of 2.5 receptions and 37.5 yards per game before that outing would be more than fine tonight at a $200 showdown salary.

And, obviously, the biggest key to Cobb on cost is the flexibility he creates to mix-and-match the high-priced guys. Derrick Henry and Aaron Jones carry easily the highest overall ceilings.

Allen Lazard figures to be the sneakier WR play after Christian Watson's huge Week 10. He still played more than the rookie last week, running a route on every one of Aaron Rodgers' dropbacks.

One interesting lineup that's not likely to be duplicated much:

You'd obviously be banking on a Henry-dominated game that leaves the Packers chasing. You could also mess around with any of the Packers in the captain slot to create more salary flexibility. 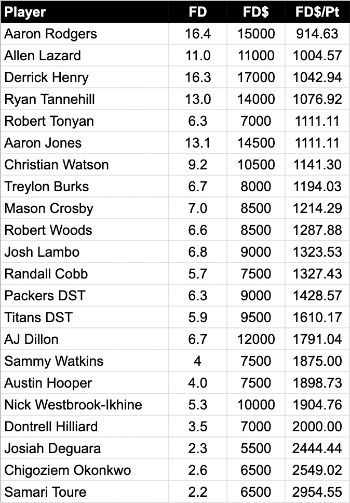