Sunday night features an interesting matchup between an offense that has stunk through 2 games with a new coach and new star QB, and another that just lost its starting QB for the year.

Denver sits just 24th in the league in scoring. But the Broncos also rank 7th in yards per play. So perhaps they haven’t been quite as bad as the game results and Russell Wilson’s fantasy points might suggest.

The 49ers might have gained fantasy upside in the switch from Trey Lance to Jimmy Garoppolo. We all love the rushing ability of the 2nd-year QB, but Garoppolo has completed 67.6% of his career passes and averaged 8.4 yards per attempt as a 49er. The switch undeniably helps Deebo Samuel, Brandon Aiyuk and George Kittle – even if only because it turns more run plays into passes.

Kittle should be set to make his season debut after missing the 1st 2 games with a groin injury. He’ll find a Broncos defense that Football Outsiders says has been weaker in coverage vs. TE (22nd in DVOA) than any other position. 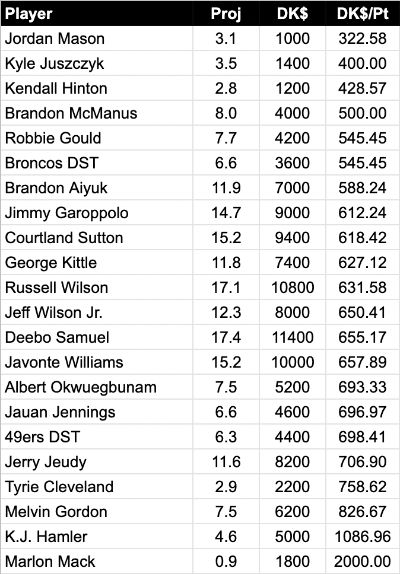 The 3 guys at the top of the chart don’t lead the way because they’re exciting options. They sit high because of low salaries plus opportunity. All 3 might do nothing. But injuries present potential opportunity for Jordan Mason and Kendall Hinton. Kyle Juszczyk is always a better bet to do nothing. But he comes off 0 targets through 2 games to play with the QB who targeted him 38 times (2.2 per game) last season.

The 1st non-cheap option on the chart is Aiyuk, who fared fine last week but trails Deebo Samuel (by a lot) and George Kittle despite running just as many routes as Samuel so far.

Jeff Wilson Jr. carries intriguing upside. He took over the RB work after Elijah Mitchell went down in Week 1. And then then only other RB to share with him in Week 2 – Tyrion Davis-Price – also went down. Wilson could control tonight’s 49ers backfield. 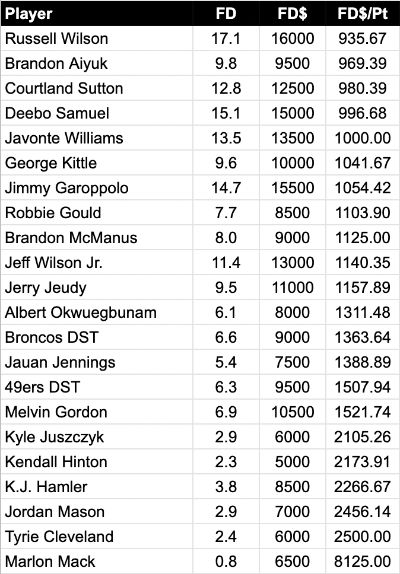 Aiyuk sits high on FanDuel as well, for his low salary relative to other high-profile options from this game.

It’s interesting that Russell Wilson sits just $500 ahead of a QB who has yet to start a game this season. To me, that speaks to the lack of creativity in FD pricing vs. DraftKings.