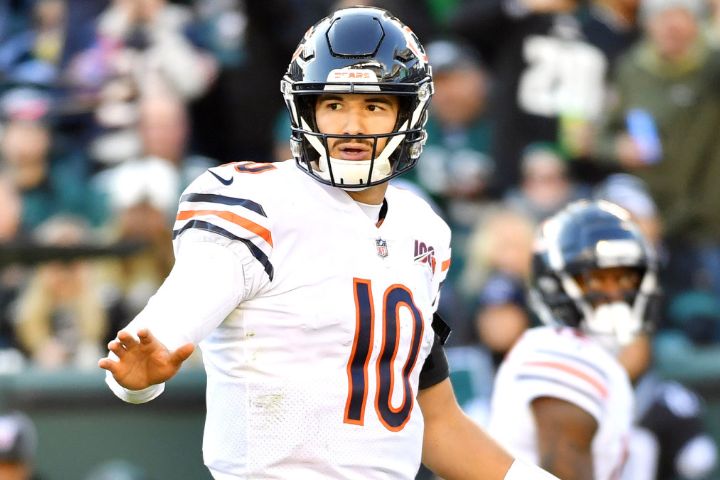 Week 12 brings us the 1st Bears-Packers matchup of the season. I’ll give you a minute to calm down your excitement.

Last year’s meetings produced 13 total points in Week 1 at Chicago and then 34 at Green Bay in Week 15. The Bears’ offense actually out-gained the Packers each time, with a high point of 415 yards in the 2nd meeting.

Trubisky actually started the 1st meeting, too. He managed just 228 yards, 0 TDs and 1 INT in that one, though. Robinson also had a big game there (7-102), but the only other 2 Bears to catch more than 2 balls were RBs Tarik Cohen and Mike Davis.

Trubisky makes his … return for this meeting, his first action since a single rushing attempt in Week 8 (and 1st start since Week 3).

On the other side, Aaron Rodgers threw for exactly 203 yards and 1 TD in each meeting with the Bears last season. This year has obviously found Rodgers well outproducing his 2019 numbers overall. Chicago remains among the league’s top defenses, though: 4th in overall DVOA, 3rd against the pass.

Our adjusted fantasy points allowed has the Bears as the 7th-worst scoring matchup for QBs.

Let’s get to the values for this slugfest ...

Marquez Valdes-Scantling is questionable after developing an Achilles’ tendon injury during the week. He was limited Thursday and then missed Friday’s workout. MVS doesn’t seem worth trusting here, especially at a poor value point.

Cole Kmet certainly isn’t a centerpiece play, but he’s worth considering coming off 3 straight weeks of season highs in playing time. That included 70% of the snaps last time out, when he ran a season-high 18 routes. Kmet ran 3 more routes than Jimmy Graham. We’ll see whether that continues coming out of the Week 11 bye. But the $4400 salary difference between them makes Kmet easily a better value.

Mitchell Trubisky could be the difference maker in this one, though. We’ve seen the statistical upside -- including his rushing ability. The Packers have improved on defense during the season, but they still enter the week 18th in overall DVOA.