The DraftKings pricing this week does NOT believe in Bears TEs after the rain-soaked offensive debacle of Week 1 (vs. San Francisco). And that just might be enough to put 2 of them in play.

The Sunday night matchup sending the Chicago Bears to face the Green Bay Packers features a couple of passing offenses that let us down in Week 1. It’s a little easier to give Chicago a pass because of the weather (and the fact the Bears attempted only 17 throws). Aaron Rodgers’ crew, on the other hand … the best hope is that this year’s Week 1 proves to be as big a fluke as last year’s.

That was when the Packers got blowed out 38-3 by the Saints (in Jacksonville) and collected just 229 total yards. That team, of course, went 13-3 the rest of the way, finished 10th in both scoring and yards and ranked 2nd in Football Outsiders’ offensive DVOA.

This year’s version doesn’t have Davante Adams. It might get Allen Lazard back tonight, though … for whatever that’s worth. 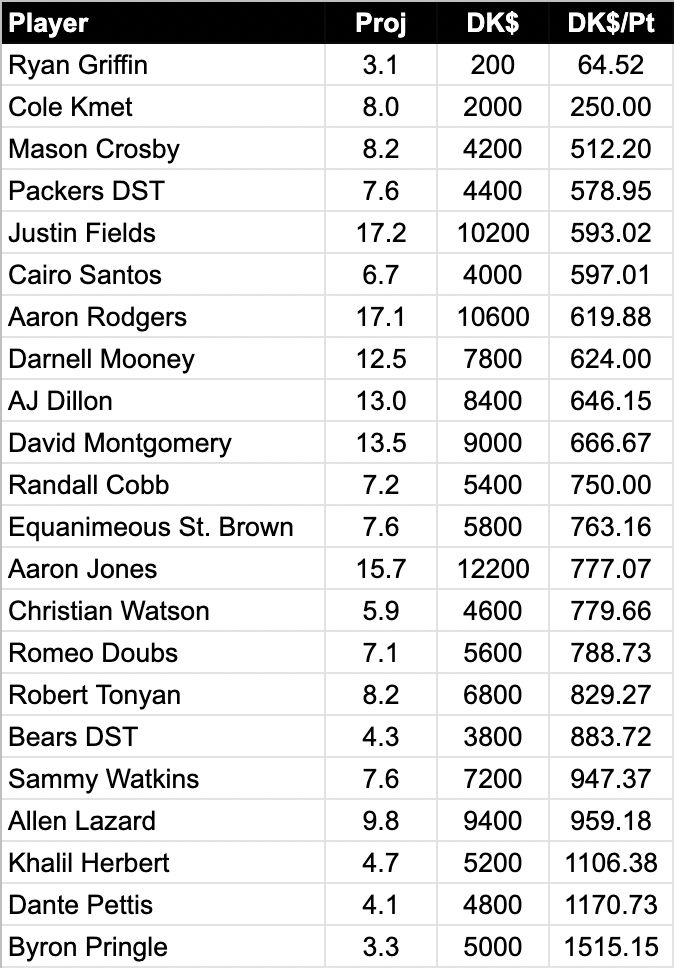 The Packers played TEs tough last year. They ranked 7th-best in TE-coverage DVOA. Green Bay allowed the 12th-most PPR points to the position, but 17% of those points came from Ravens TE Mark Andrews in Week 15. Take that line away, and the Packers would have gone from 12th to 23rd in points per game allowed to TEs.

The biggest factor here, though, is those salaries. Cole Kmet costs half-a-kicker in tonight’s showdown and 43% of Christian Watson. And don’t ignore Ryan Griffin. He ran a route on 42% of Justin Fields’ Week 1 dropbacks. Granted, the low passing volume shrinks that sample even further. But that’s excellent involvement for a guy at the absolute minimum showdown salary.

On the other side, those tiny salaries for Bears TEs can help you lean on what looks like the strength of this Green Bay offense: the backfield.

AJ Dillon probably shouldn’t sit so far behind Aaron Jones in salary, given that he beat Jones by 5 carries and a target in the opener. That doesn’t make Dillon the lead back. Jones still played more snaps and ran more routes. But it does mean it shouldn’t be surprising any time Dillon leads the backfield in scoring.

This will normally be the space where I move to the FanDuel table. Unfortunately, I went on today to find my account suspended for some reason. Of course, contacting them gets you engaged in their laborious reinstatement process instead of someone simply answering your question about why this happened.

I’ll try to get it set ahead of the Monday night game. Fortunately, you’re not missing much. The FanDuel showdown format and salaries are lackluster. They use the same 1.5 multiplier for the scoring of the guy you put in the captain spot. But there’s no multiplying of the salary. Add that to the half-PPR scoring, and that generally means putting a QB in that slot. Then you build out with less creative salaries. Frankly, I don’t like playing showdowns there.