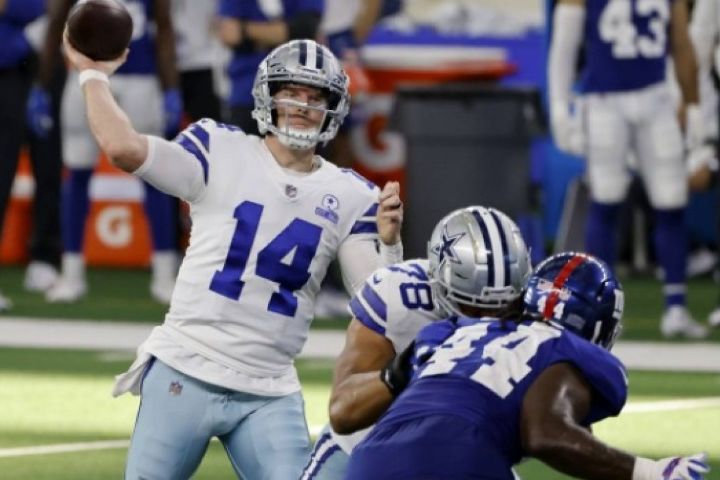 We saw Amari Cooper go surprisingly quiet in the game Prescott left early, while CeeDee Lamb went wild. The Cowboys say they won't change the offense for Andy Dalton from how they've been running things. Should we believe that, or will this version lean run a bit more after passing on about 66% of offensive plays through 5 games?

And what about Arizona in this potential shootout? The Dallas defense has allowed more points than any other. It entered the week 20th in pass-defense DVOA and 23rd against the run, according to Football Outsiders. That should give us plenty of options in building lineups around Kyler Murray.

We don’t usually get any player with a sub-$100 dollars-per-point value in these tables. That’s because it’s rare to find someone at minimum showdown price who’s actually getting regular playing time. But that’s what Noah Brown has been doing lately.

Brown’s 4-catch, 43-yard Week 4 vs. Cleveland looks like a statistical outlier. He has just 3 other catches for the season. But each of the past 3 games has found Brown playing 21-29 snaps at shares ranging from 27% to 35%. (The Browns game actually marked his low point in snap share over that span.) He actually spent more snaps run-blocking (12) than rookie WR CeeDee Lamb (10) did in last week’s victory over the Giants. If we believe the switch to Andy Dalton brings the possibility of more rushing lean than the Cowboys had with Dak Prescott to open this season, then perhaps Brown could even see a bit more playing time.

Obviously, anything Brown gives us at a $200 showdown salary would be terrific.

Among the starter-level skill-position players in this game, Christian Kirk’s $6,000 pops him to the top of the value rankings. Kirk set season highs in targets, catches and receiving yards against the Jets last week and should see Dallas rookie CB Trevon Diggs in primary coverage tonight. Pro Football Focus grades Diggs 144th in coverage out of 171 targeted CBs so far.

You can get both QBs and Ezekiel Elliott or DeAndre Hopkins into a lineup on FanDuel, but you’ll need to go no higher than Christian Kirk at $10,000 for your 4th slot in that case. Cardinals TE Dan Arnold stands as a potential option to fill out that lineup at $5,000. He has seen 4 targets twice in the past 4 games, but his playing time dropped to a season-low 36% of the snaps in last week’s blowout win over the Jets. Perhaps a shootout situation here would put the converted WR more in the mix.