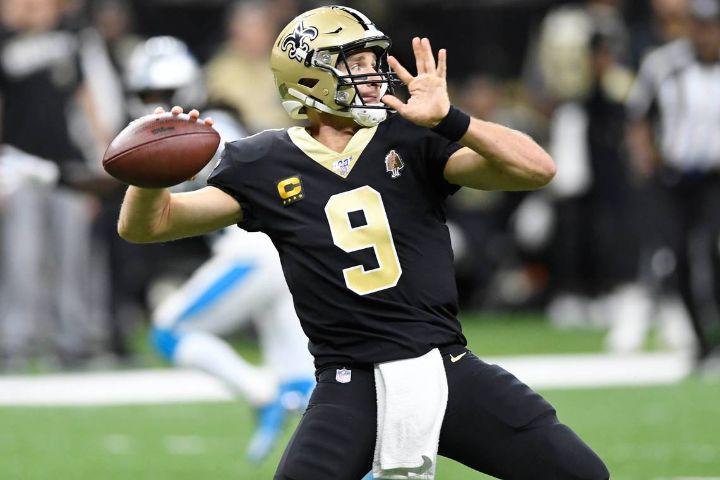 Drew Brees at home against a middling pass D? That should be a fantasy-blowup spot. … Right?

Well, this year’s Brees ranks just 20th among all starting QBs in passing grade so far, according to Pro Football Focus.

He arrives just 22nd among QBs in fantasy points per game, having reached 300 yards passing only once. Over his 220 games with the Saints, Brees has finished 52% with 300+ yards and averaged 300.3 per contest.

But this year’s Brees heads into a 4th straight game with no Michael Thomas. He does at least get TE Jared Cook back.

On the other side, Chargers rookie QB Justin Herbert has thrown for 290+ yards in each of his 3 starts. He just went in to Tampa and delivered 290 and 3 TDs vs. a Buccaneers defense that rates among the league’s best so far this season.

He might get WR Mike Williams back tonight. But the Chargers definitely won’t have RB Austin Ekeler for a while.

New Orleans’ reserve TEs can help you out if you just need a cheap 6th player to fill out your lineup who could vulture a TD. But they’re more likely to give you nothing.

Taysom Hill might be the cheapest option with real upside. He has just 10 carries and 3 targets through 4 games, but 4 of those rushes have come in the red zone -- including 1 inside the 10-yard line in 3 of 4 contests. Hill is always worth a look in Saints showdowns, simply because of the team’s varying usage plans for him. The Chargers are speedy at LB but also fairly inexperienced. Kenneth Murray is a rookie. Kyzir White’s in his 3rd year but has just 13 starts behind him. With Thomas out again, perhaps HC Sean Payton works in Hill a bit more with the idea that it could challenge the young ‘backers.

It’s also worth noting that the Chargers are already down starting DE Melvin Ingram and might need to go without DE Joey Bosa. He’s a game-time decision with triceps, knee and ankle issues.

Emmanuel Sanders and Tre’Quan Smith have seen an identical 17 targets over the 3 games Michael Thomas has missed. Smith has caught 4+ passes in each of those games but leads Sanders just 13-11 in receptions over that span.

Football Outsiders rates the Chargers worse in coverage vs. TEs (28th in the league) than against any other position. Good time for Jared Cook to return from injury.

If you want Kamara and both QBs, then Sanders will be the most expensive 4th you can fit. That would leave you reaching for Adam Trautman or Josh Hill as your hail-mary 5th. Swap out Herbert for Allen, and you can get to Taysom Hill.It’s not possible to fit both QBs, Kamara and Allen into a single showdown lineup on FanDuel. That would leave just $3,000 for your last slot, and the minimum salary is $5,000.

If you want room for creativity here, you’ll probably need to leave out 1 among Kamara and the QBs.