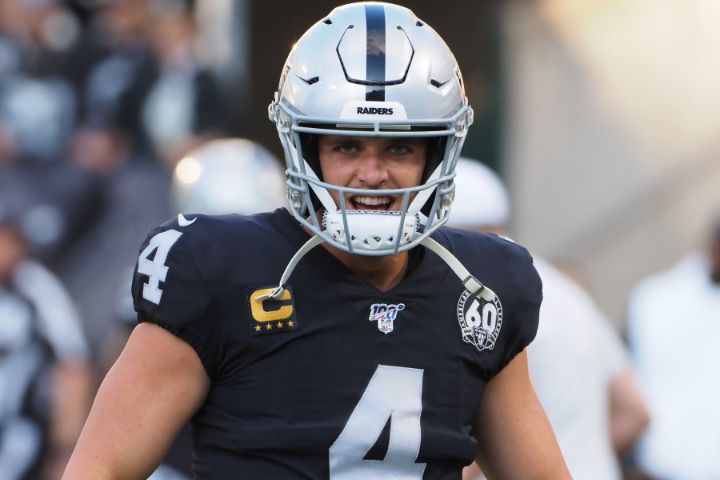 The Raiders arrived to Kansas City as 11-point underdogs back in Week 5. That must have made them mad.

Despite falling behind 14-3 early in the 2nd quarter and then 21-10 in the middle of that period, Vegas went on to beat the Chiefs 40-32 at their place. And K.C. needed a TD and 2-point conversion late in the 4th quarter to make it that close.

The Raiders racked up 490 yards in that game: 144 on the ground and 346 in the air. Derek Carr outdueled Patrick Mahomes on 12 fewer pass attempts, hitting 3 different pass-catchers for scores along the way. Rookie Henry Ruggs posted -- really -- his only fantasy-relevant game of the season so far.

Carr enters the rematch, though, off 3 straight games of 25 pass attempts or fewer.

The Chiefs come off a bye, which Andy Reid-coached teams have tended to do quite well. Reid has gone 18-3 career after the bye; 14-7 against the spread.

K.C. is the heavy favorite once again. This time it’s by 7.5 points, which is up 1 from where it opened.

Le’Veon Bell has totaled 6, 9 and 5 touches in 3 games with the Chiefs. Sixteen of those 20 touches have been carries. It’s quite possible we have him ranked too high at 29th among PPR backs this week. But it’s also possible the veteran garners more work coming out of the bye. We’ll see. Bell was a big-name acquisition, but the Chiefs are paying him only $1 million. Of course, he’s a fairly low-risk bet at just $1400 in salary here.

It’s also worth noting that Darrel Williams checks in at just $400. He doesn’t hit the chart above because we didn’t project him for anything this week. Williams has just 5 touches since Bell arrived, with 4 of those coming in 1 game. But Williams played just 1 fewer snap than Bell in Week 9, matched him in pass routes and spent 18 passing-down snaps on the field vs. Bell’s 15. Bell’s route rate has dipped to 21.7% and 28.9% the past 2 weeks after 37.9% in his K.C. debut.

Derek Carr looks interesting for the captain spot at $3600 savings vs. Patrick Mahomes. None among Nelson Agholor, Henry Ruggs and Hunter Renfrow makes for a clear stack beyond Darren Waller, so play with the salaries if you’re trying to narrow down your lineups. Waller’s discount of $4000 and $3600 vs. Tyreek Hill and Travis Kelce, respectively, makes that pairing even more intriguing.

The fact that you don’t multiply the salary in the MVP slot makes it less worthwhile to go away from Patrick Mahomes there. It’s not like you’re leaving him out of your lineup completely. You could still favor Carr in a large-field tourney.

Josh Jacobs turns up as a better value on this site, while the lack of full-PPR scoring adds risk to the Chiefs’ crowded backfield.The fact that you don’t multiply the salary in the MVP slot makes it less worthwhile to go away from Patrick Mahomes there. It’s not like you’re leaving him out of your lineup completely. You could still favor Carr in a large-field tourney.