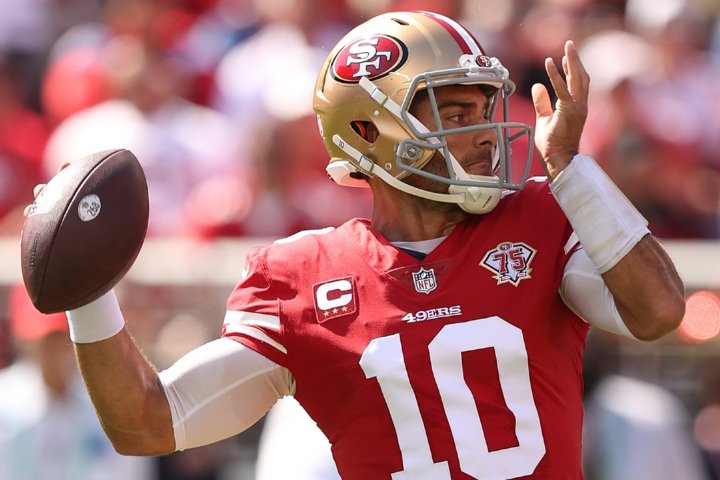 This might be a week to take off the Sunday night showdown.

The Indianapolis Colts and San Francisco 49ers arrive with the week’s 2nd-lowest over/under (42 points), ahead of only Denver-Cleveland on Thursday night.

There’s nothing but meh here. The Colts arrive as the #19 scoring offense; the 49ers 17th. Indy sits 31st in situation-neutral play pace, according to Football Outsiders; San Francisco 23rd. Even the weather appears to be against scoring in this one.

The Colts are already down last week’s target leader, T.Y. Hilton. The 49ers, meanwhile, go back to Jimmy Garoppolo after he missed Week 5 with a calf injury. This time around, it’s Trey Lance sitting out with a knee injury. 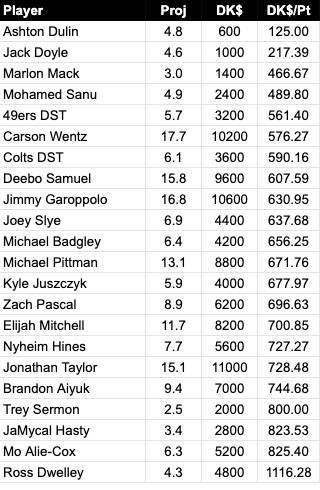 Ashton Dulin and Jack Doyle look more interesting than Marlon Mack among the cheapies at the top of the chart. Vegas has the 49ers favored by 3.5 points tonight, while Football Outsiders has them -13.8% in run-defense DVOA vs. +5.7% against the pass. That’s worth noting because it probably tells us a little more than the rankings in each category: 15th and 14th, respectively.

Those rankings vs. all league defenses would indicate the pass and run defense being pretty equal. But the percentages say San Francisco is actually performing slightly below average level vs. the pass (hence the place) and further ahead of league average (minus) against the run.

All of that combines to give the pass-catchers more upside than Mack, even with the weather.

It doesn’t look like a great night for kickers, weather wise. Deebo Samuel and Michael Pittman, on the other hand, should remain in consideration because of their high target-share ceilings. 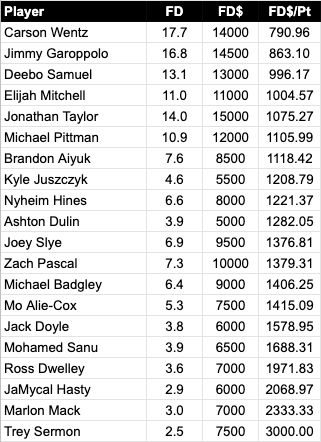 With the QBs -- as usual -- topping the value chart in FanDuel’s unimaginative salary structure, Jimmy Garoppolo gets more interesting. The Colts defense hit Week 7 tops in the league in DVOA vs. the run, compared with just 29th against the pass. Throw in that Indy rates just 21st in coverage vs. #1 WRs and 22nd against TEs, and the Garoppolo-Samuel-Ross Dwelley combo looks intriguing.