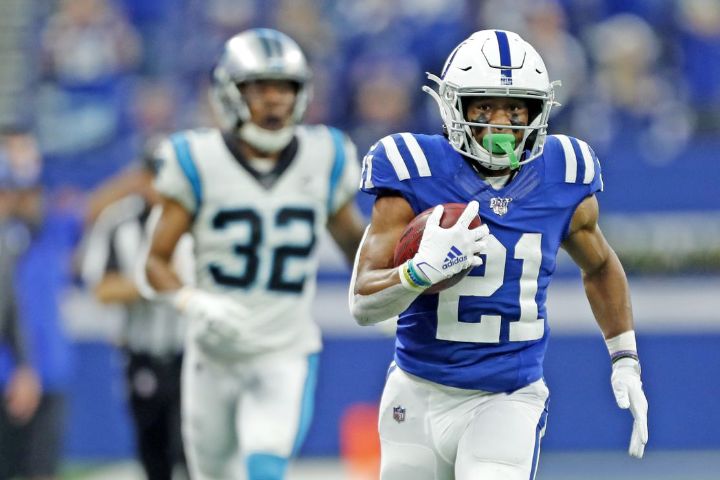 Don’t be fooled by the top of the DraftKings value chart below.

It might look like there are plenty of bottom-shelf options, just waiting to give you spending flexibility under the cap. But it’s pretty easy to look like a per-dollar value if you’ve done enough to be worth projecting for any touches.

Mixed in among those players with the triple-digit salaries is a four-digit guy who might not even play. If he does, however, he could be a key to lots of showdown-winning lineups.

Another key might just be guessing who Lamar Jackson finds for a TD. He has thrown exactly 1 in each game so far. Will that continue?

Let’s get to the values … 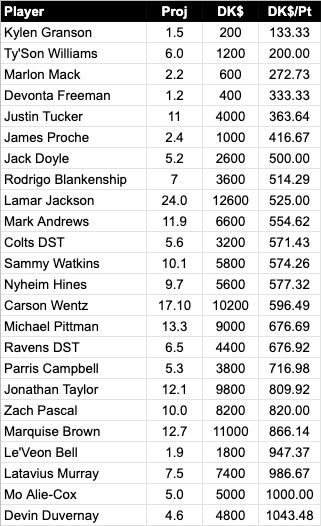 Ty’Son Williams is interesting here. He obviously carries the salary of someone who’s expected to be a non-factor against the Colts. But he could be anything from a healthy scratch to Baltimore’s lead RB. If he’s active tonight, then he’ll be worth getting some exposure to in a game his team is favored to win by 7.5.

Justin Tucker has attempted 8 FGs over just the past 2 games, including his record-setting 66-yarder at Detroit. He’s probably underpriced at $4,000 on this slate.

Mo Alie-Cox delivered 2 TD catches last week. But he also ran just 17 pass routes in that game at Miami, 1 fewer than rookie TE Kylen Granson and a mere 47.2% of Carson Wentz’s dropbacks. Jack Doyle is back now and has seen route rates of 53.5%, 75.6% and 50%. He’s an affordable $2,600, and Baltimore arrives rated 19th in Football Outsiders coverage DVOA on TEs. By comparison, Michael Pittman matches up with the #2 defense in coverage vs. #1 WRs.

We’d certainly bet on Pittman seeing more targets and outperforming Doyle. But it might be a little easier to target the TE in this one. 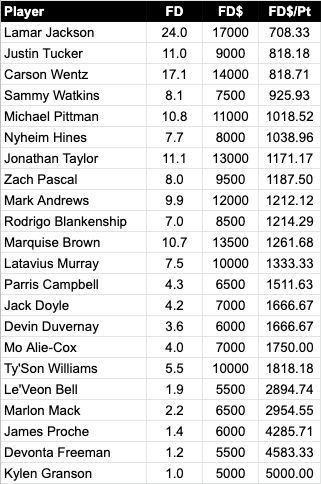 Nyheim Hines is an interesting option for showdowns on both sites. But he sits higher on the value chart here than on DK. We all know that he’s capable of finishing a game with just 2 touches, as he did against the Rams in Week 2; or 4 touches, as he did last week at Minnesota and last November against these Ravens.

But there’s also a chance that Hines sees a bigger role tonight. Baltimore rates 10th in run-defense DVOA and has allowed the 7th-fewest RB rushing yards per game so far. The Ravens also rank just 26th in DVOA in pass coverage on RBs -- their worst rating against any position. Throw in that the Vegas line expects Indy to be trailing in this one, and it’s not hard to envision Hines becoming a key performer.

Finally, I don’t think I need to make a case for Marquise Brown, who sits 15th among PPR WRs in points per game despite entering the week just 31st at the position in targets and leaving points on the field in the Detroit game. Instead, I’ll point out that Sammy Watkins costs $6,000 less despite leading Brown by 1 target for the season, trailing him by 3 catches and also posting strong yards per reception (16.1).