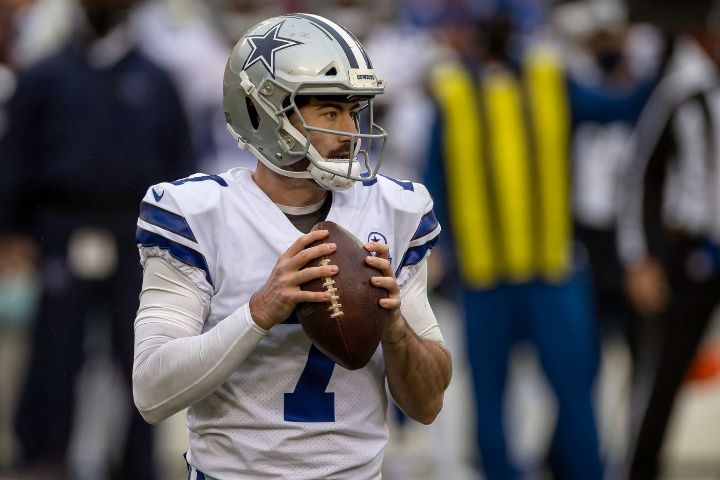 This matchup looks a lot different than we expected it to back when the season began.

There’s no Dak Prescott. And his backup’s down, too.

There’s no DeSean Jackson or Zach Ertz. But Jalen Reagor and Dallas Goedert are set to return from IR.

There’s no Miles Sanders. There is Ezekiel Elliott … but he hasn’t been anything close to his norm since Prescott went down.

So now we get a matchup of Philly’s #27 offense in Football Outsiders DVOA vs. Dallas’ #30 defense. And the Cowboys’ #24 offense -- and even that number’s still inflated by Dak -- faces the Eagles’ #16 defense.

At least it might be interesting to see who this Ben DiNucci is.

On the Dallas side, you’ll get more bang by fading Ezekiel Elliott -- though there’s obviously always risk to avoiding him.Carson Wentz comes with receiving options at various salary levels, including freshly returned Jalen Reagor and Dallas Goedert. Reagor looks particularly inviting because of his downfield speed and Wentz’s insistence on throwing deep. Even with all the injuries to Eagles pass-catchers, Wentz entered Week 8 with a league-high 40 “deep” attempts (throws 20+ yards downfield).

Dallas Goedert beats Jalen Reagor in value on FanDuel and is probably a better TD bet than the rookie. Greg Ward might be the sneaky play here, though. There’s room for both him and Travis Fulgham to stay involved even with the returning teammates.Corey Clement sits high on both value charts here, but he only touched the ball 3 times last week with Miles Sanders out.