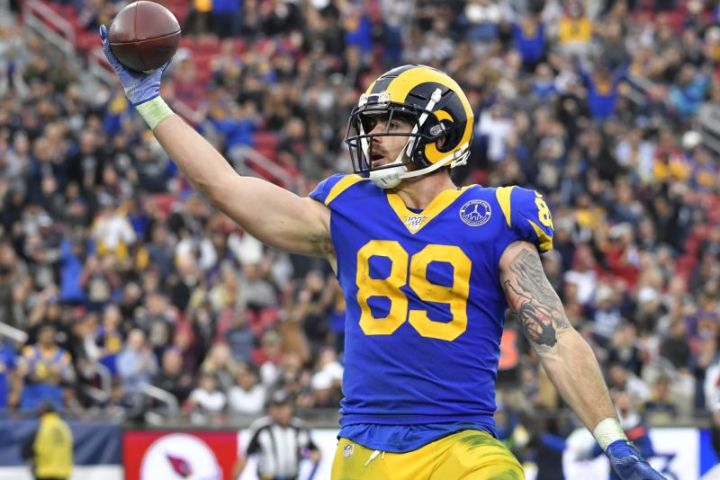 Just like the Thursday-night opener, Sunday night features a rematch of teams that played last season.

The Cowboys hosted the Rams in Week 15 of last season and dominated their guests. Dallas hit halftime with a 28-7 lead, en route to a 44-21 victory.

The rematch finds a new coaching staff on the Dallas sideline -- though the same breakout OC, Kellen Moore, from 2019. First-round WR CeeDee Lamb is the big addition on the field, boosting an already impressive crew of pass-catchers.

The Rams return most of last year’s cast, though they’ve moved on from Todd Gurley. We’ll start finding out Sunday night whether rookie Cam Akers has inherited the lead job or just works in a committee.

Oooooh, that $1,000 salary on Everett looks nice. And you don’t even need to doubt Tyler Higbee. We have Higbee 6th in the PPR rankings at TE this week. You can include both in a Showdown lineup if you’d like.

Lamb pops as the top value among Dallas pass-catchers, checking in at $400 cheaper than even Jarwin. He costs $2,200 less than Gallup and $3,200 cheaper than Cooper. The rookie also generated plenty of buzz in camp after arriving as a 1st-round pick that never should have reached Dallas at #17.

If Rams CB Jalen Ramsey spends more time covering Amari Cooper than the other Dallas wideouts -- as I’d bet, and as Pro Football Focus projects -- then the matchup gets even better for Lamb. We’ll see exactly how the Cowboys plan to pass out the slot snaps that Cobb left behind, but that spot could feature the best individual matchup for Dallas pass-catchers. As recently as last week, Rams beat writers didn’t know which inexperienced corner (David Long or Darious Williams) would take over the slot after Nickell Robey-Coleman left in the offseason.

FanDuel seems to be disrespecting Higbee this week. He checks in $500 cheaper than Jarwin and $1,500 cheaper than Lamb for the Cowboys showdown. Beyond Higbee’s big day in the aforementioned December Cowboys blowout, Dallas ranked just 23rd in TE-coverage DVOA for 2019, according to Football Outsiders.

It’s also worth noting that Kupp checks in more expensive than Woods on each site. Dallas will be without CB Jourdan Lewis, its most frequent slot man last season. How much that impacts Kupp will depend on how often he runs from the slot. That decreased over the 2nd half of last season, as the Rams moved from more “11” personnel (3 WRs, 1 TE) to “12” (2 WRs, 2 TEs). Putting Kupp and Everett into the same lineup probably wouldn’t be ideal. Their optimal game plans from an alignment standpoint run opposite to each other.