Has there been a better bet to get shut out than the Texans tonight against the Eagles?

Their 15.75 implied team total by the Vegas numbers certainly isn't the lowest of the season. But we're already talking about a team ranked 30th in yards per play and tied for last in TDs.

Now that offense takes on the NFL's only undefeated team, which arrives as the toughest scoring matchup for QBs and 2nd-best on the year in Football Outsiders' defensive DVOA. And it'll do so without it's only veteran star, WR Brandin Cooks, who has been away from the team all week and is angry he didn't get traded.

Does that leave anyone worth playing from the pass offense?

Rookie RB Dameon Pierce becomes even more of a focal point ... but does that allow Philly's defense to key on and stifle him? (Check out our projection on Pierce vs. the market.)

The Eagles' offense, meanwhile, can likely do whatever it wants. So our challenge for showdowns is deciding who to leave out. 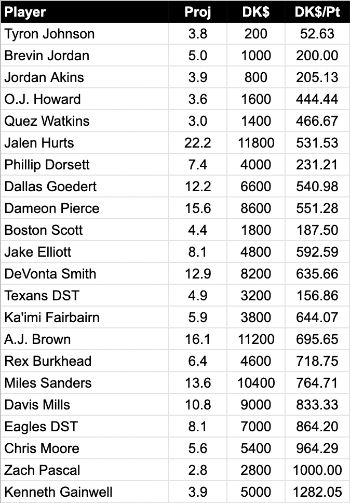 Obviously, Miles Sanders or A.J. Brown could deliver several TDs tonight and become the star. But no player in this game comes close to Jalen Hurts in ultimate ceiling. So he needs to be squarely in the plans here. You don't need to make him your captain in every lineup, but fading him from that slot completely might be getting too contrarian.

Sanders carries obvious upside here as well, facing a Houston defense that rates worst in the league against the run both by DVOA and adjusted fantasy points allowed. That clearly helps both Sanders and Hurts. But it also adds sleeper appeal to Kenneth Gainwell and Boston Scott, in case this turns into an "every Eagle scores on the ground" game.

The closest thing to a silver lining on Cooks' absence might be that it opens up some truly cheap options for the Texan you need to throw in. If any among WR Tyron Johnson or TEs Brevin Jordan, Jordan Akins and O.J. Howard finds the end zone at those salaries, you'll be in great shape.

Even Rex Burkhead could prove sneaky. RB is the only position at which the Eagles currently rate below league average in coverage DVOA. 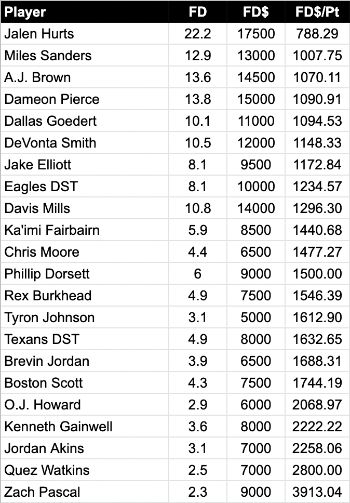