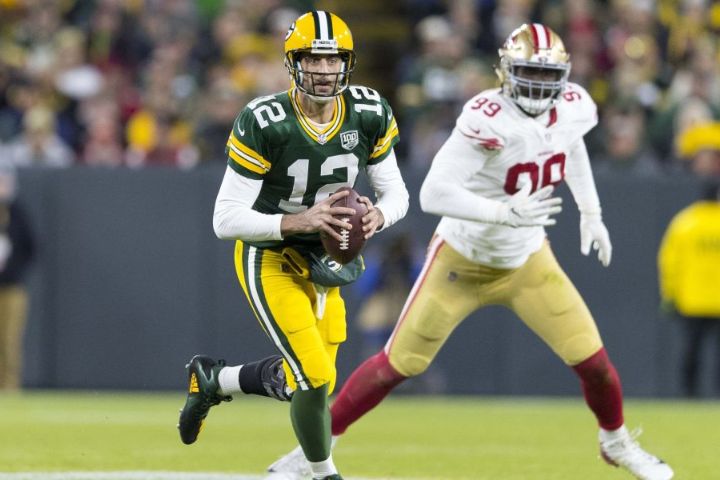 Things could not have gone much worse for Green Bay in their opener -- literally.

Things can only get better this week … right?

Vegas says so. Green Bay hit Sunday tied for the week’s 3rd-highest implied point total (30). And the 11.5-point line in the Packers’ favor ranked 3rd on its own.

You can certainly plan on most showdown lineups trying to fit as many Packers as possible. But you’ll obviously have to get at least 1 Lion in there. And we want to help you find those targets. 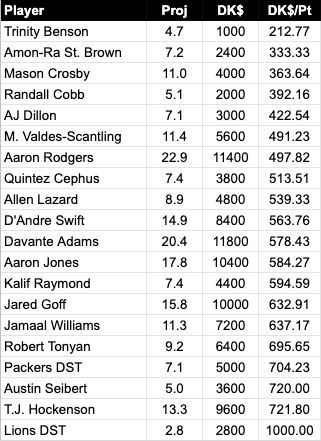 Detroit’s WR injuries are important to keep in mind here. Tyrell Williams is out with a concussion. Kalif Raymond is questionable after a thigh injury surfaced Saturday. If he’s out, then the top 3 Lions wideouts look like Quintez Cephus, Amon-Ra St. Brown and Trinity Benson (in some order). KhaDarel Hodge could enter the mix as well. He doesn’t show up in the chart above because we didn’t project him for this week. But he checks in at the $200 minimum on DK. So anything he gives you would be a bonus.

Week 1 found Raymond leading all Detroit WRs by running a route on 73% of Jared Goff’s dropbacks. St. Brown followed at 70.4%, with Benson at 62% and Cephus at 39%. Williams, of course, factored into that game before going down, so his absence this week figures to alter those shares somehow. But that’s why we’re treating the other 3 as the expected leaders. If Raymond turns up active, we should probably expect him to lead the group in playing time again. Combine his leading salary with the injury risk, though, and it’s tough to like him.

St. Brown’s slot-focused role (93% of his Week 1 pass snaps, according to Pro Football Focus) makes him the easiest fit with Goff’s style.

Of course, that’s a lot of talk about the Detroit wideouts, when we all know that the best bets for Lions touches are T.J. Hockenson, D’Andre Swift and Jamaal Williams. Swift enters tonight questionable with his lingering groin injury but finished the week with a full practice.

On the Green Bay side, Davante Adams and Aaron Jones certainly don’t need much selling. But it feels worth noting that Adams will face an already lackluster set of corners that lost top cover guy Jeff Okudah in the opener (Achilles’). And that’s the same Detroit defense, of course, that afforded Elijah Mitchell 104 Week 1 ground yards and blew up our waiver runs. 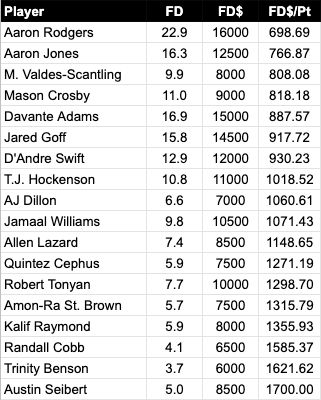 Over here, you can easily fit Aaron Rodgers, Aaron Jones, Marquez Valdes-Scantling and either Jared Goff or Davante Adams -- with $8500 or $9K left to spent, depending on which of those is your 5th. Or you could skip Jones to fit both Goff and Adams, then fill with a guy at $6500 or less. Randall Cobb and Trinity Benson lead the options in that range.