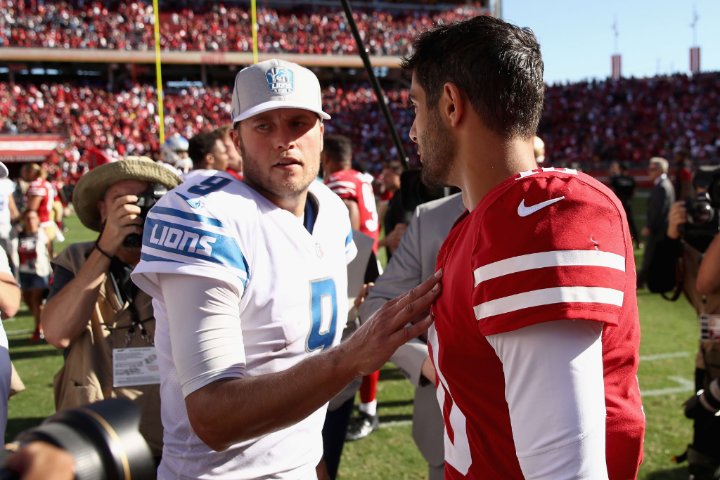 It’s been quite a week and a half for the Rams.

L.A. entered last Sunday night as a TD favorite over the Titans. But then Tennessee quickly took control of a shockingly ugly Rams performance. After taking just 7 sacks through his first 8 games and throwing 4 total INTs, Matthew Stafford went down 5 times and tossed a pair of INTs to the Titans.

L.A. then won the Odell Beckham Jr. sweepstakes on Friday … only to lose Robert Woods for the year on the same day.

The 49ers rank just 17th in the league in scoring to date. But they check in 11th in yardage and an even stronger 6th in Football Outsiders offensive DVOA. San Francisco sits 8th in passing offense and 3rd rushing.

Elijah Mitchell more than doubled his season target total last time out, collecting 5 of them in a game that saw Jamycal Hasty garner another 4. Hasty will miss tonight’s game, but Jeff Wilson Jr. is expected to be more involved. HC Kyle Shanahan has said only that Wilson “will have a role,” according to ESPN’s Nick Wagoner.

Brandon Aiyuk arrives having finally put together consecutive positive games. And that didn’t stop George Kittle from returning with a grand 6-101-1 receiving line.

That game also marked the 2nd straight in which Jimmy Garoppolo threw for 320+ yards. Is more of that coming? Garoppolo did hit up the Rams for 268 yards and 3 TDs in his lone shot at them last season. 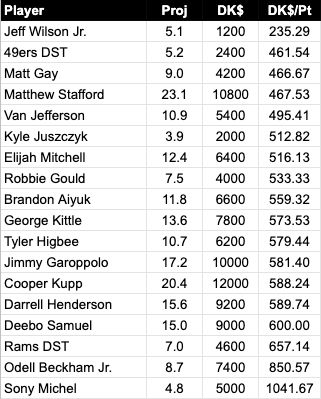 How much work will we actually see for Jeff Wilson Jr. tonight? That’s anyone’s guess. As the #2 RB the past 3 games, Jamycal Hasty garnered just 7 carries to 44 for Elijah Mitchell. The price is certainly right, at least, for taking a chance on Wilson stealing a goal-line touch or 2.

Despite Jimmy Garoppolo’s big numbers the past 2 weeks, it’s tough to not start with Matthew Stafford here. The 49ers arrive as the 2nd most friendly scoring matchup for QBs by our adjusted fantasy points allowed. Football Outsiders rates San Francisco just 25th in pass-defense DVOA, compared with #6 vs. the run. Of course, it was the 49ers who just allowed James Conner’s huge day of 3 TDs and 173 total yards.

L.A.’s defense has leaned the opposite way, rating 5th in pass-defense DVOA and 14th vs. the run. That seems like good news for Elijah Mitchell. The Rams have allowed RB TDs each of the past 4 weeks. 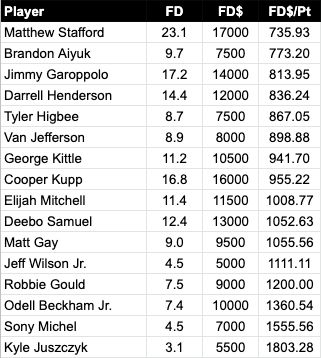 Van Jefferson checks in $2000 cheaper than Odell Beckham Jr. on both sites … somehow. Here’s what HC Sean McVay had to say Friday about Beckham’s chances against the 49ers: “There’s a chance. We’re going to see. You can see he’s a really sharp guy. We haven’t practiced yet [Saturday], but [I] like the look in his eye and we’ll see how he’s feeling, and we’ll see what that looks like as far as how we are able to utilize him if he’s able to go on Monday.”

So, we’ll see. It’s tough to expect more from him than from Jefferson in their 1st game together, though.

George Kittle will cost you $3000 more than Brandon Aiyuk but checks in $2500 short of Deebo Samuel's price. That makes him attractive against a Rams D who's biggest weakness -- according to adjusted points allowed -- has been TE. L.A. ranks 3rd friendliest against that position. Kittle has dominated the Rams in his career, including a 7-109-1 line in his only meeting last year.