With no Trey Lance, this has become a truer rematch of a clash the 49ers led ... until the most important matchup.

San Francisco beat the eventual Super Bowl champs twice in the regular season. Elijah Mitchell topped 20 carries in each of those games, though he averaged just 3.3 yards per rush across the 3 meetings and never found the end zone.

The last of those battles, of course, came in the NFC title game. Matthew Stafford delivered his biggest numbers in that one: 337 yards and 2 TDs on 31-of-45 passing. That followed much more modest yardage totals of 243 and 238 in the regular season. Stafford also tossed 5 INTs across the 3 contests.

Jimmy Garoppolo collected 5 TDs vs. 3 INTs in those games and racked up 9.0 yards per pass attempt. But he averaged just 27 attempts, a trend these Niners would probably like to continue. 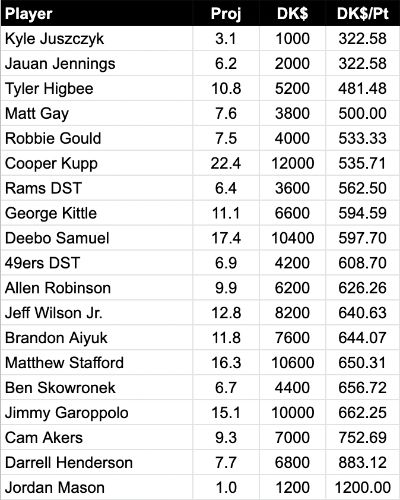 No Elijah Mitchell this time, of course, but Jeff Wilson Jr. looks like a capable fill-in. The betting market is favoring the "under" on his line of 15.5 carries, however. So it might make more sense to think of him as a contrarian type in showdown lineups as opposed to a player to rely on.

Deebo Samuel had his way with the Rams last year, going for 98+ total yards and at least 1 TD in all 3 meetings. He'll be tough to leave out, along with god-among-men Cooper Kupp. So we'll need some cheap options.

Both kickers are obviously in play there. The salary also puts Ben Skowronek into play. He has taken part in at least 85% of snaps in each game so far. He's averaging just 10.7 yards per catch and has yet to see a red-zone target. But he'll be on the field a lot more than all other players in that range. And San Francisco has been the friendliest defense to WR scoring so far, according to our adjusted fantasy points allowed. 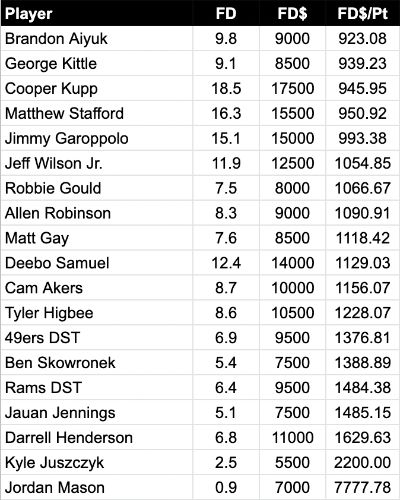 The top 3 RBs are all priced $10K and above here, in a matchup that favors pass-catchers over runners on each side. So the primary approach here also looks like sticking whatever you need to around Kupp and Samuel to make them fit.