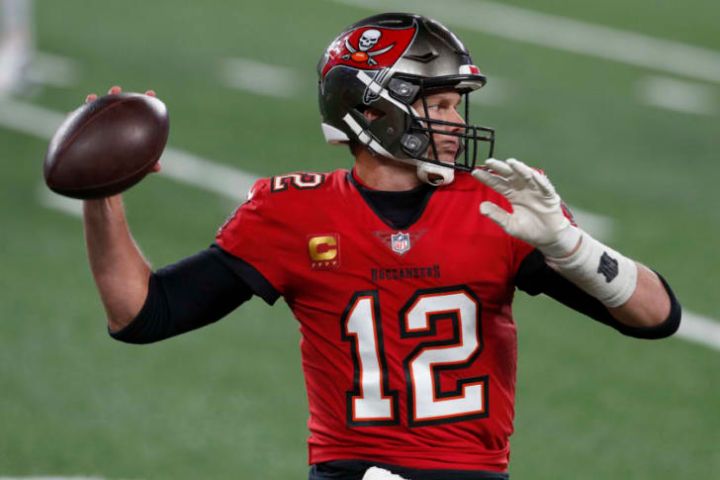 The past 2 weeks have given us polar-opposite versions of the Buccaneers.

They followed a season-low 194 yards and putrid 3 points against the Saints in Week 9 with season highs in yards (544) and points (46) against the Panthers last week.

The New Orleans beatdown came on a Sunday night. The week before, Tampa underwhelmed against the lowly Giants on Monday night (pulling out a late win). Their other primetime game found the Bucs losing at Chicago while scoring their 2nd-fewest points thus far (19).

Should we worry about 43-year-old Tom Brady playing beyond his bedtime? Or will some nighttime practicing over the past week help the Bucs turn their primetime performance around?

And what about these Rams? They controlled the action pretty well in last week’s win over Seattle. But that followed a flailing, 17-point performance in a loss at Miami before the bye. L.A. has actually scored 17 points or fewer in 3 of its past 6 outings. And now comes a matchup with the league’s top-rated defense by Football Outsiders DVOA.

It should be a fun matchup. Let’s check the showdown values ...

Scotty Miller sits outside our top 80 at WR for the week. Even so, we probably have him projected too high.

The guy has seen just 4 targets over the 2 games since Chris Godwin returned and Antonio Brown joined the fray. He has caught 2 of them for 14 total yards. Miller dipped to just 9 total snaps last week. Even though he tops this chart, I don’t think he belongs in any of your showdown lineups. The next 4 options in the list, however, all present potential upside.

Leonard Fournette fell well behind Ronald Jones in Week 11 work, but that followed a 3-week stretch that made it look like Fournette might be on the verge of taking over. Different game flow this week could significantly alter Tampa’s RB usage.

Cam Akers was the only of the Rams’ 3 RBs to not find the end zone in the win over Seattle. But he led the backfield with 10 carries. So there’s upside at his low cost -- albeit in a bad matchup.

The Bucs have been a negative matchup for fantasy scoring at every position so far. But TE has been the least impacted, entering the week as basically a neutral matchup (-2.6% impact, according to our strength-of-schedule formula). Football Outsiders rates Tampa 27th in TE coverage. So there’s upside for Gerald Everett and Tyler Higbee. Everett has seen his playing time increase over the past 3 games and looks like an option particularly in the red zone.

You might notice there’s no Rams kicker in the table above. As of this writing, they have yet to announce who’ll kick against the Bucs. It will either be (former Buc) Matt Gay or Austin MacGinnis. HC Sean McVay says he knows who it’ll be but didn’t want to announced before he had to. Both sit at $3600 for DK showdowns, so just make sure you check to see who it is before you use one.

I mentioned the Rams kicker question on DK. Same deal here, where both carry $8000 price tags.

I’m not sure why Chris Godwin costs the most among Buccaneers WRs. Mike Evans edges him in FanDuel points per game for the season and has outscored Godwin in 2 straight games since the latter’s return from injury. We like Godwin best for his slot matchup in this game. All 3 Bucs wideouts figure to be plenty involved, though, and are in play.

On the other side, Cooper Kupp also seems to have the best individual matchup by virtue of his time in the slot. His playing time dipped vs. Seattle. But we’d bet on Tampa Bay’s staunch run defense motivating a more pass-friendly alignment.