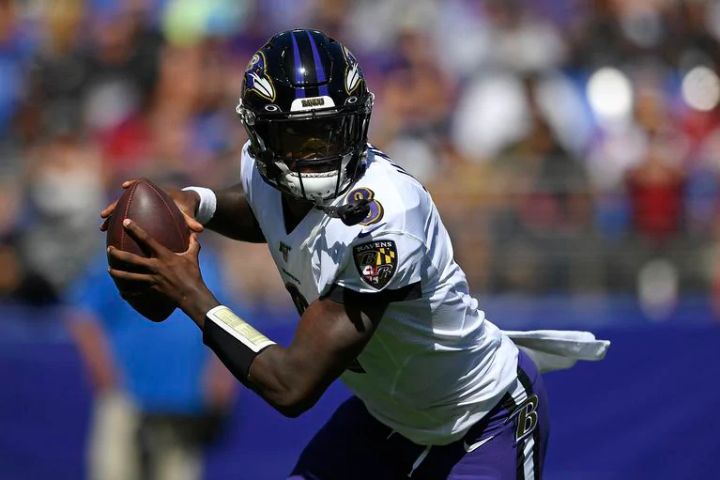 This is going to be interesting.

If that changes significantly on Monday night -- and/or beyond -- then most people will probably point to the J.K. Dobbins and Gus Edwards injuries forcing a shift.

But these Ravens tried to sign T.Y. Hilton and JuJu Smith-Schuster this offseason, settling instead for Sammy Watkins in free agency. Then they drafted Rashod Bateman in Round 1 and Tylan Wallace in Round 4. And then they gave TE Mark Andrews a big extension earlier this month.

What if they’ve just been planning to pass more anyway? I’m not talking a Bills-level shift from run-heavy to pass-heavy. But throwing, say, 55% of the team would mean a big volume boost for Baltimore receivers, while still ranking the Ravens among the run-heavier teams.

Of course, it’s just something to ponder rather than act on right now. And the Bateman injury complicates the passing plan, especially after a buzzy start to his training camp and preseason.

At the least, we can expect this one to be interesting. And however he’s doing it, we know Lamar Jackson brings a high ceiling every time he hits the field. 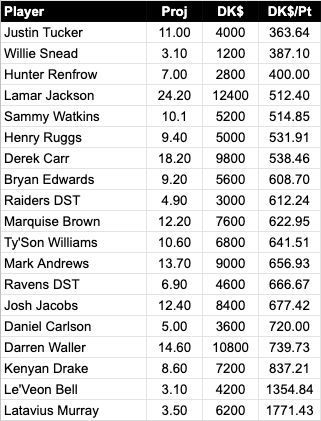 It’s tough to say who draws the best individual matchups among Raiders WRs, with injuries to Marcus Peters and Jimmy Smith shaking up the Baltimore CB depth chart. Renfrow stands out here because he’s $2200 cheaper than Henry Ruggs and $2800 shy of Bryan Edwards. All could be volume candidates, though, if the Raiders fall behind.If there’s anything more exciting than playing Jackson in fantasy, then it’s finding a kicker at the top of the value chart. At least it’s friend of fantasy Justin Tucker in this case. We can enjoy tossing him into lineups. And perhaps all the injuries at RB turn a few more TDs into FG attempts here.

The biggest thing to watch here will be Josh Jacobs’ status. The Raiders downgraded him to questionable Sunday night because of an illness. So we’ll have to see whether he’s active. Kenyan Drake’s outlook would get an obvious boost in Jacobs’ absence, with Peyton Barber likely the #2 back. 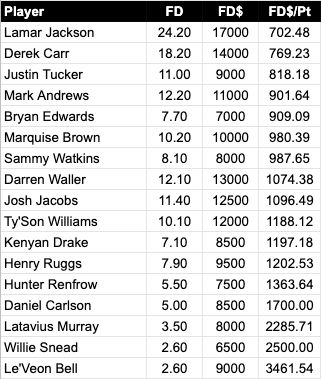 FanDuel’s meh pricing for showdowns makes it fairly easy to fit basically whatever you want. It’s tough to get away from Jackson in the “MVP” slot, since FanDuel multiplies only the scoring and not the salary. (DK multiplies both by 1.5.)

It is worth noting that Baltimore fared much better in coverage vs. WRs than TEs last year, according to Football Outsiders. The Ravens' DVOA numbers vs. each position:

Surely they have a specific plan for Darren Waller tonight. But this could be a rare occasion where using Vegas' offensive centerpiece in the MVP slot helps differentiate for a large-field tournament.