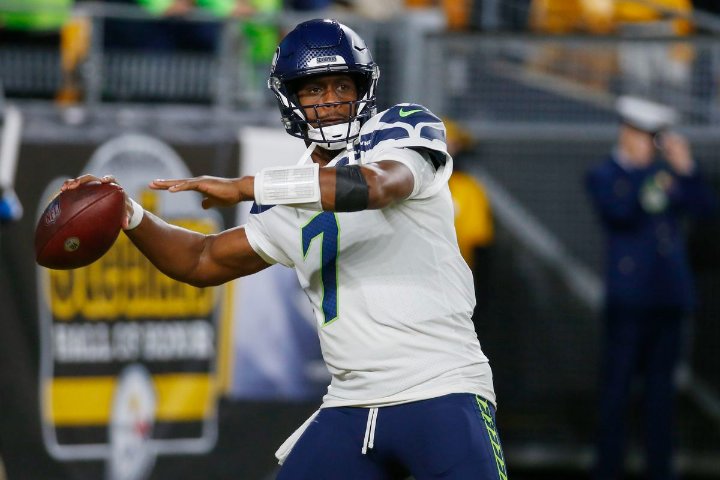 If you’re hoping for a better game than the rain-soaked Colts-49ers slog of Sunday night, then I’ve got some bad news for you.

Week 7 will be closing out with a Saints offense ranked 28th in yardage (and a lucky 9th in scoring). Jameis Winston leads a pass offense that ranks dead last in attempts and 2nd-to-last in yardage.

That might just make Geno Smith the higher-ceiling QB in this matchup. Smith produced an average depth of target of just 4.1 yards in his 1st start in place of Russell Wilson at Pittsburgh -- lowest among all QBs for the week, despite having D.K. Metcalf and Tyler Lockett at his disposal.

Even though Smith didn’t fully (or even mostly) leverage that duo last time out, the fact he has them at all must look dreamy to Winston, who still has Marquez Callaway, Deonte Harris and Kenny Stills as his top trio at the position. 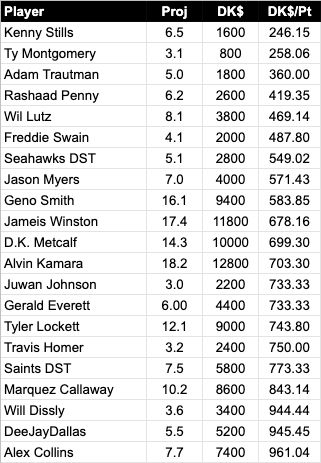 Kenny Stills got up to 71% playing time and 5 targets (3rd on the team) in the win over Washington last time out. That doesn’t make him an exciting fantasy option, but that’s pretty good usage for a guy checking in at just $1600 in DK salary. Stills actually led all Saints in routes in that game at 29 -- 82.9% of Jameis Winston dropbacks. Marquez Callaway trailed by 1, with Adam Trautman and Alvin Kamara tied for 3rd at 25 routes.

Those 25 routes for Trautman marked a significant bump from the previous 3 games. Here are Trautman’s route rates vs. Winston dropbacks by week, starting with the opener:

If he maintains that, he’s a value at his showdown price.

On the Seattle side, there’s upside in guessing the backfield correctly. Alex Collins is questionable for the game after putting in just 1 limited practice during the week. Rashaad Penny comes off IR after not having played since Week 1. It has sounded like Seattle gave Penny enough time to get all the way back to full strength. He’s the most attractive Seahawks back, all factors considered. 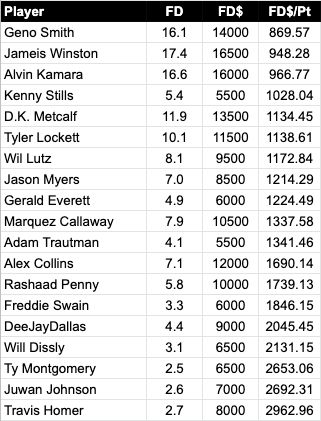 This is an easier week than usual to consider leaving out a QB. If you’re doing multiple lineups, then try builds leaving each out, as well as including both. If you’re not a high-volume player, then the $2500 difference in salary between the QBs makes Geno Smith significantly more attractive. You can fit Smith, Metcalf, Lockett and Kamara, with $5000 remaining. That lets you choose among the few guys in that range who play any snaps. Phillip Dorsett, Colby Parkinson and Alex Armah look like the best bets in that category.