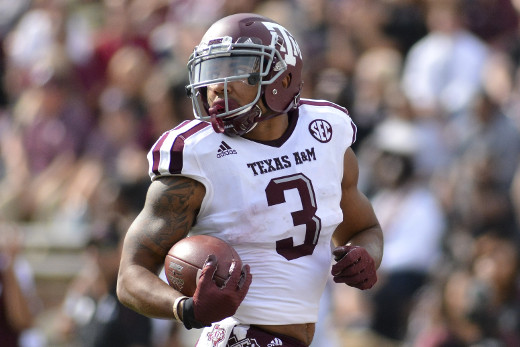 Kirk looked like a future stud back in 2015. As an 18-year-old true freshman, he paced the Aggies in catches, receiving yards and receiving TDs. That squad included current Rams WR Josh Reynolds, then a 20-year-old junior.

Kirk led all SEC freshman in receptions and receiving yards per game. He was also a weapon on special teams, racking up 385 kick-return yards and 341 punt-return yards on a juicy 24.4-yard average with 2 TDs. The campaign earned him Sporting News Freshman All-American and SEC Freshman of the Year honors.

Kirk remained a special teams ace, averaging 21.7 yards per punt return with 3 scores. He was named First-Team All-SEC and a Third-Team All-American.

This past season brought another dip in production. Kirk finished with career lows in receptions, market share of receptions, receiving yards and market share of receiving yards. On the other hand, he tallied career highs with 10 scores and 13.0 yards per catch. The TD tally was particularly impressive considering A&M totaled just 22 passing scores.

Kirk was also relatively efficient, averaging 8.13 yards per target vs. 6.99 for all other Aggies. He ranked 30th among draft-eligibles with 2.30 yards per route run and 29th with a 5.33% drop rate, according to Pro Football Focus.

Courtesy of DraftBreakdown.com and Woodlands Aggie

As you might expect, he does most of his damage on short and intermediate routes. Kirk combines impressive short-area quickness and burst to create separation.

(These next 2 clips are the same play. The 2nd shows just how much separation Kirk created on his comeback route.)

Kirk isn’t strictly a short-range target, though. While he didn’t do it a whole lot at A&M, he flashed the ability to make plays downfield.

Kirk also possesses some of the best hands in this year’s WR class. Not only did he post that solid 5.33% drop rate, but he also showed the ability to come down with tough grabs on off-target passes.

Kirk is almost certain to be primarily a slot receiver at the next level. Ten years ago, that would have limited his fantasy value. But that’s not the case in today’s NFL. Just this past year, 5 of the top 15 WRs in PPR points ran 43+% of their routes from the slot.

Kirk has the hands, route-running and after-the-catch ability to emerge as a high-volume target for his new team. His odds of doing that will hinge largely on landing spot and draft capital invested in him.

While he didn’t test particularly well at the Combine (27th percentile SPARQ score), Kirk boasts some of the most impressive tape in this year’s WR class. His production the past couple of years felt a bit disappointing after a super promising freshman season. But his career market share numbers still stack up nicely with other top prospects:

Kirk is also 1 of the younger guys in the WR class, having just turned 21 in November. That, at least theoretically, gives him more room for growth than someone like Calvin Ridley, who’s already 23.