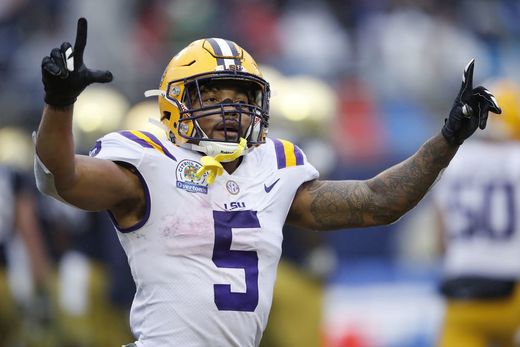 A 5-star prospect from Baton Rouge -- and a top-5 RB nationally according to Rivals and 247Sports -- Guice arrived in 2015 to watch Leonard Fournette lead an LSU backfield that also sported sophomore Darrel Williams. But Guice appeared in all 12 games as a true freshman, flashed for a 16-161-1 line against South Carolina -- even with Fournette rushing 20 times and Williams 10. That game included the ridiculous run you’ll find below.

In 2016, Guice capitalized on Fournette’s ankle trouble to lead the Tigers in rushing attempts, yards and TDs. In fact, Guice led the entire SEC in rushing yards and all SEC RBs in TDs, despite starting just 6 games. He checked in 20th nationally in ground yards despite tying for just 71st in carries. His 7.6 yards per rush ranked 5th in the country.

Guice started 2017 solidly, scoring 2 TDs in each of the 1st 2 games while rushing for 224 yards on 42 attempts. But he hurt his left knee in the Sept. 16 SEC opener at Mississippi State. Guice didn’t miss any games, but he fell short of 80 rushing yards each of the next 4 weeks.

Guice rebounded a bit to carry 19+ times in each of the season’s final 7 games, averaging 22.1 per outing over that span. But the guy who gobbled up 7.6 yards per rush for the 2016 season cracked 4.8 just twice in the 9 games after hurting his knee. Guice, did, however, rack up 276 yards in an October win over Ole Miss and finished his career with 3 of the top 4 single-game rushing lines in LSU history. He also earned 2nd-team All-SEC honors as a junior.

After dealing with knee trouble throughout his final season with the Tigers, Guice appeared fully healed in running a 4.49-second 40 at the Scouting Combine. That beat Fournette’s time by 0.02 second and ranked him 4th among this year’s RB class with a 110.2 Speed Score, behind Saquon Barkley, Kalen Ballage and Rashaad Penny. Guice did so despite weighing in about 6 pounds heavier than the weight he said played at in 2017.


I started with 2017 and worked back on Guice, knowing that the left knee reportedly hampered him through last season. I won’t make you waste your time.

Let’s just start with this …

That’s a true freshman in his 2nd SEC appearance, on his way to 161 yards and a TD on 16 rushes. And a guy who could run like that against any FBS defense -- even a weak South Carolina run D -- at 18 is capable of just about whatever over the next 5+ years in the NFL.

Guice’s running style has garnered Marshawn Lynch comparisons from analysts such as himself. The LSU RB said at the Combine: “When I run, I really think about him every time. And when I go back and watch him, I’m like, ‘Man, I really run like this dude, man. It’s crazy.’”

Here’s another run from the same 2016 win over Texas A&M -- the record-breaker -- that adds cutting ability and vision to the spin moves, balance and diligence …

Watch the 2017 film on Guice, and he seems to be missing some of the burst and doesn’t seem to have the same quickness in his initial cuts, like when he escaped this penetrating DT in 2015 …

He was still good, but Guice just didn’t have as much juice. The speed he boasted at the Scouting Combine suggested his knee is back to full strength. I’ll be curious to see what he posts in the 3-cone drill and 20-yard shuttle if he participates in those at Thursday’s LSU Pro Day. (Update: Guice didn't test at Thursday's Pro Day; just took part in individual drills.)

In addition to the attention-grabbing angry runs and athleticism, Guice knows when to punch it up inside and is capable of “getting small” to gain at least what’s available even through a small hole in a short-yardage situation -- and often more than what others could manage.

What you won’t see a lot of on any year of college tape is Guice getting opportunities as a receiver. That shouldn’t come as a shock.

Les Miles took over as LSU’s coach back in 2005. In the 13 seasons since, Tigers RBs have averaged a mere 36.8 receptions as a group. Just 3 backs have reached 20 receptions in that span (which includes Ed Orgeron taking over the team in 2016 and serving as HC last year: Joseph Addai in 2005, Jacob Hester in 2006 and Darrel Williams last year.

Guice, meanwhile, didn’t lead any of his 3 LSU backfields in receptions, though he did come on for 3+ catches in 3 of last season’s final 5 games after totaling just 6 over the 1st 7 contests.

The 8 games I watched spanning all 3 seasons didn’t include enough targets to judge Guice’s receiving ability either way. But I did see him draw targets on out routes from a slot position in 2 different games. And I saw him regularly on the field for passing situations. So it’s not as though LSU was replacing him with Williams for passing situations.

Moreover, although Guice could surely use further seasoning in pass protection, he’s not scared to take out the legs of an oncoming rusher to give his QB room to throw.

"Don't waste your time on 2017 film because he wasn't even back up to his top speed until the bowl game,” an unnamed LSU assistant coach told NFL.com’s Lance Zierlein. “He will be the same player he was in 2016. If you had a grade on him after last year, you should use that."

A coach is usually gonna back his guy like that, but it’s an important opinion in this case. If you know Guice primarily from his 2017 turn as LSU’s feature back, then you might not be seeing his full potential.

Guice lost 2.3 yards per carry between his 2016 breakout and the 2017 impacted by a bum knee. The 2016 version averaged 0.5 more per carry than any other qualifier in the SEC. We’d like to see more of a college receiving background, but that just hasn’t been the way at LSU. And we’ve still seen some ex-Tigers catch some balls out of the backfield early in the NFL.

Joseph Addai caught 40 passes as a 2006 rookie. Spencer Ware caught 33 once he finally landed a starting gig with the 2016 Chiefs. Jeremy Hill hauled in 27 balls in his strong 2014 rookie campaign (before falling apart). And Leonard Fournette snagged 36 in 13 games last year.

Guice racked up 617 yards and 8 TDs receiving as a high school senior, so he should know what to do when the ball comes his way. And he looks decent -- and willing -- in pass protection, which can only help him stay on the field.

Landing spot is all we’re waiting to see here. The Pittsburgh rumors -- the Steelers reportedly have dinner plans with Guice after his Thursday Pro Day -- are annoying. Going there would likely keep him stuck behind Le’Veon Bell in 2018. Of course, Guice would still look good there long term. And many other suitors could make him more immediately attractive.