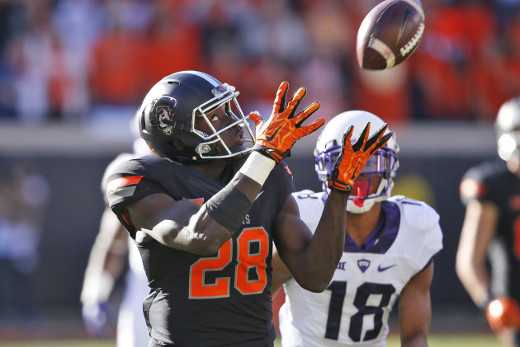 Washington boosted his numbers every year at Oklahoma State. He flashed as a true freshman with outings of 3-87-2 and 4-114-1, finishing 3rd on the squad in receiving yards and 1st in TDs.

Washington emerged as the top dog in 2015, accounting for a team-high 23.7% of the receiving yards and 28.6% of the receiving TDs. He posted a gaudy 20.5 yards per catch on the strength of 17 gains of 20+ yards and 4 of 70+. Washington was a 2nd-team All-Big 12 selection, behind future 1st-rounders Corey Coleman and Josh Doctson.

Washington set new career highs across the board this past year, leading the entire country in receiving yards and tying for 4th in TDs. He topped 100 yards in 9 of 13 games and hit pay dirt in 10 of 13. His 20.9 yards per catch led all WRs who caught more than 40 passes. According to Pro Football Focus, Washington led the country with 17 receptions and 715 yards on deep passes (balls that travel 20+ yards through the air from the line of scrimmage).

Extremely efficient, Washington caught 63.2% of his targets to go along with that 20.9 yards-per-catch average. He ranked 5th among all draft-eligible players with 3.47 yards per route run, per Pro Football Focus. The massive season earned Washington All-American honors and the Biletnikoff Award (nation’s top receiver).

It’s worth noting that Washington’s share of receptions and receiving yards were down a bit from 2016 on a 2017 Cowboys team that finished top 7 in completions, passing yards and passing TDs. But his marks still stack right up with the other top receivers in this class:

He’s not the burner you might expect a 6’0 WR who averaged 19.8 yards per catch for his college career to be. (That was confirmed by his mediocre 4.54-second 40 time at the Combine.) Washington instead wins downfield with a variety of other skills:

On the replay below, notice how Washington takes his defender straight upfield before angling toward the sideline only in the final 5 or so yards before the ball arrives.

Washington also boasts a strong pair of mitts and a larger catch radius than you’d expect from a man of his size. Note that his hand size, arm length and wingspan all checked in 62nd percentile or better at his position.

Washington isn’t a standout route runner at this stage of his development, but he at least understands how to use his downfield ability to set up shorter routes.

It’s also worth noting that Washington ran 92% of his routes from the right side of the field last season, according to Pro Football Focus. His NFL team will likely want him to become more versatile.

Washington doesn’t boast elite size or athleticism. He registered a SPARQ score in the 37th percentile among WRs. That potentially lowers his fantasy ceiling and gives him less margin for error at the next level. But, of course, we’ve seen plenty of WRs excel with primarily skills and technique (see: Antonio Brown).

Washington possesses 1 of the most impressive arrays of skills in this year’s WR class. He combines sticky hands with a strong understanding of how to create a throwing window for his QB with body positioning. Throw in timing and body control in jump-ball and contested situations, and Washington plays a lot bigger than his listed size.

He looks like a relatively safe bet to emerge as at least a #2 WR and lower-end fantasy starter. If he can continue to develop as a route runner and lands in a favorable situation, there’s upside for more.