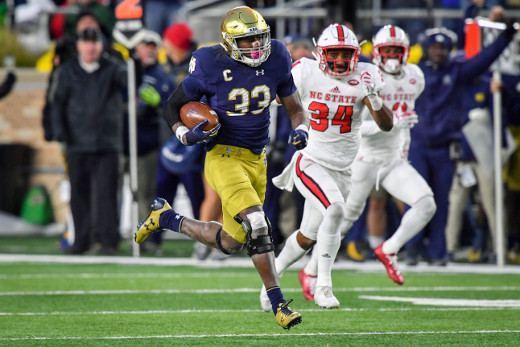 You won’t find us doubting Adams’ commitment to football.

As a high school junior (2013), he tore his right ACL and meniscus. His MCL was badly sprained.

The young RB reportedly dealt with nagging ankle and knee trouble for much of his Notre Dame career. But you wouldn’t know it based on the numbers.

He led the Fighting Irish in carries both as a sophomore and junior, with the latter campaign — at one point — garnering Heisman hype. He fell just 7 yards shy of Notre Dame’s single-season rushing record.

Adams’ career YPC of 6.6 is impressive, but his underlying figures look even better.

In 2017, he earned Pro Football Focus' 3rd best Elusive Rating in this draft class. He also averaged a massive 5.2 yards after contact per attempt — easily the best among draft-eligible backs. In total, 1,019 of Adams’ yards came after contact.

So, Adams clearly used his 225-pound frame effectively. Interestingly, though, he dropped 12 pounds after the season. While he didn’t run at the NFL Combine, Adams — a former sprinter — recorded a 4.48 forty-time at his Pro Day.

We’ll see if Adams follows through with surgery. Either way, health will remain a hot topic as he enters the pros.

Adams boasts remarkable speed in the open field. This run against NC State was clocked at 22.37 MPH, per ESPN. According to NFL.com's Next Gen Stats, Leonard Fournette (22.05 MPH) notched the top NFL RB speed during a Week 5 run.

The flip side is that Adams won't see many opportunities like that in the NFL. Notre Dame's dominant O-line -- led by Quentin Nelson and Mike McGlinchey -- often opened some huge holes.

Adams does deserve some love for his power and tackle-breaking ability ...

Will that same power show up if he plays 2018 (and beyond) at 213 pounds? Or will his NFL team ask him to bulk up again?

As a pass catcher, Adams did most of his damage in 2016 (21 catches). He just doesn't profile as a major difference-maker in the NFL. Pro Football Focus' receiving grades came in below average, while he tallied a 10% drop rate in 2017.

Adams makes a relatively easy grab in the clip below but doesn't show much wiggle after the catch.

Adams overcame a nasty knee injury to enjoy a productive 3-year career. He has plenty of NFL long-speed -- and a power game that could work well in goal line/short-yardage situations. He's also praised as a team-first, high character guy with an impeccable work ethic.

Throw in Adams' medical concerns and a loaded RB class, and it's possible he slides late into day 3 of the draft. He might need the perfect scenario -- or an injury ahead of him on the depth chart -- to see substantial work.

We have real-life trades, potential fantasy-RB trades and 2 weeks' worth of streaming-D targets ...