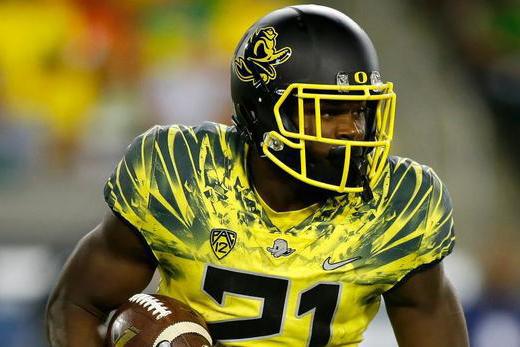 Freeman ran rudely onto the scene right away at Oregon. He immediately took over the backfield for a Ducks team that had gone 11-2, finished 9th in the AP ranks and scored the nation’s 4th most points in 2013.

The true freshman racked up 252 carries, 3rd most in the Pac-12. Freeman added the league’s 5th most rushing yards and a conference-leading 18 ground TDs. Oregon shifted 2013’s leading rusher, Byron Marshall, mainly to WR to make way for the new kid. And even though Thomas Tyner remained in place as the #2 RB, his 113 carries accounted for 17.8% of the team’s 2014 total, down from his 20.4% share the season before.

Freeman got off to a slowish start, totalling just 28 rushing attempts over the 1st 3 games and falling short of 90 rushing yards in each of his 1st 5 outings. But his 18-121-2 rushing line at UCLA touched off an 8-game stretch in which the rookie averaged 20.4 carries and 119.1 yards per contest. (The campaign finished with a pair of down performances in the playoff weeks against Florida State and Ohio State defenses that ranked 34th and 8th in yards allowed per carry, respectively.)

The 2014 Pac-12 offensive rookie of the year climbed in Year 2, tying for 8th in the country in carries, ranking 4th in rushing yards and compiling 19 total TDs for the 2nd straight year. Freeman fell short of 105 yards just twice and scored in 10 of 13 games, en route to 1st-team All-Pac-12 honors.

The following season brought an injury-spurred downswing. Freeman hurt his right knee early in a Week 3 loss at Nebraska. That cost him the following game. In his 2nd game back, Freeman sat out the 2nd half after getting “nicked up,” according to OC Matt Lubick. The RB managed just 50 yards before leaving that one and then 86 total rushing yards over the next 3 contests.

Freeman rebounded for 3 straight 100-yard outings to close that season and then his usual production as a 2017 senior. Oregon’s offensive centerpiece tallied 122+ yards in 9 of his 11 full games. (He left the Cal contest in the 1st quarter with a right shoulder injury but missed no further time.)

Freeman accounted for more than a quarter of the team’s total offensive TDs for the 2nd time in his 4 years. His 60 career rushing TDs rank 10th all time in FBS.

Freeman isn’t likely to “wow” you with any specific game tape. He doesn’t arrive with explosive speed, and he doesn’t tend to run people over. In fact, at times you could say he doesn’t even run that much like a 229-pounder.

Although Freeman displays the ability to shed tackles at the 2nd and 3rd levels, he didn’t look especially powerful at the line of scrimmage in the games I watched (an issue that multiple draft analysts mentioned as well).

On this run against Washington State last year, Freeman hits the line way too upright and goes down easily on a 3rd-and-short run:

That looked quite convertible if he’d gotten his shoulders down at all.

That’s not to say, however, that Freeman can’t get away from initial trouble. His nimble feet on quick cuts in the backfield also aren’t typical of a big back.

Watch Freeman hop in each direction to evade backfield tackle attempts on this run, and then show solid strength and balance through contact at the 2nd level …

Freeman also brings impressive vision and patience. He appears to see what he needs to do 1-2 moves ahead to run to space on the field.

And he’s willing to let the blocks set up in front of him, whether at the line of scrimmage or downfield behind a WR …

That might sound like an obvious thing for a runner to do, but you’ll find many a back just taking off through a hole and running as far as he can as fast as he can. Freeman knows that his best bet -- like any runner -- is to allow for help from the guys out there trying to help.

He does lack the long speed to finish off some of the big plays that others in this class could take to the house. And although his receiving ability looks OK by the numbers and on tape, Freeman has yet to display much beyond the screen and swing-pass area.

Freeman’s testing numbers backed up his on-screen agility. He notched 71st and 72nd percentile times in the short shuttle and 3-cone, respectively -- at an 86th percentile weight. That size also combined with a decent 40 time to give him the 7th-best Speed Score (107.8, above NFL average) among RBs at the Combine.

Freeman’s heavy workload in college could impact his career longevity. He logged the 2nd most carries of any RB at the Combine (trailing only Northwestern’s Justin Jackson) and dealt with knee and shoulder injuries in his final 2 Ducks seasons -- though neither issue proved serious.

More importantly, for fantasy owners, Freeman proved consistently productive. He compiled the 7th most receptions among the 32 RBs at the Combine and the 6th most receiving yards. He ranked 11th in the group in career yards per carry. Freeman finished just 7 of 51 career games at less than 4.4 yards per rush, and 3 of those came right after he aggravated his 2016 knee injury. He also endured just 3 other games of less than 5.0 per rush (1 of which followed the knee injury as well).

Like just about any rookie RB, Freeman could use some pass-blocking refinement. But he at least comes with significant experience in that area.

Even if he wears down sooner than some of his classmates, Freeman looks as ready as anyone behind Saquon Barkley to claim a 3-down role early. The right situation could deliver quick fantasy value. We’ll see, though, if his pro team chooses to pair him with a more proven receiving back.