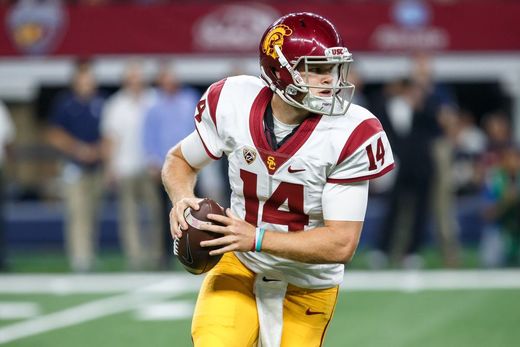 Darnold didn’t sneak onto the college scene like Baker Mayfield. He arrived a relative star -- like rival Josh Rosen.

Darnold hit USC as a high school All-American and the 2014 Orange County Offensive Player of the Year. He further proved his athletic prowess on the baseball field and basketball court.

With Cody Kessler already in place, Darnold took a 2015 redshirt. He then opened 2016 behind Max Browne on the depth chart, watching the junior start the 1st 3 games. But Darnold took over against Utah in Week 4 and spent the rest of the year in charge. (Browne then transferred to Pittsburgh.)

After a scoreless 1st start, Darnold tossed 2+ TD passes in each of the final 9 contests, averaging 3.4 a week. He finished the campaign 9th in the country in passing efficiency.

Darnold’s numbers slipped a bit in 2017, in a Trojans offense that lost top WR JuJu Smith-Schuster. But he earned 1st-team All-Pac-12 honors from the coaches, leading the league in passing yards and yards per attempt and ranking 2nd in passing efficiency.

Darnold also led the conference with 13 INTs and prompted ball-security questions with his 22 total turnovers (9 lost fumbles among 11 total). But he overcame a 6-INT start over the season’s 1st 3 weeks to toss just 7 more over the final 11 contests.

Like with Mayfield and Rosen (already profiled), it’s not hard to see the NFL upside in Darnold.

The USC passer brings plenty of arm, as evident on the 3 TDs he threw against Texas last season -- without stepping into any of them.

Darnold displayed across the games I watched the tendency to rely on his arm strength over ideal throwing mechanics to deliver his passes. It’ll be up to his pro coaches to decide whether to fix that or just let the QB do his thing. The throwing windows will get tighter in the pros, though.

That said, Darnold also brings terrific accuracy and quick decision-making, despite an elongated release. First a slow-mo of that attribute …

-- mobility to get outside the pocket
-- arm talent to toss a perfect ball without setting his feet
-- the … (let’s go with everyone’s favorite) moxie … to attempt the difficult end zone throw instead of a safer, nearer sideline option on 1st-and-10 inside the final minute of the 2nd quarter
-- and the accuracy to deliver the ball into the only spot he could complete it.

Sure, it took a terrific catch on the other end, but coverage dictated that Darnold couldn’t have tossed that ball any shorter, deeper or further from the sideline.

That moxie, of course, can get QBs into trouble at times. It did so twice for INTs in Darnold’s surprisingly poor 2017-opening performance against Western Michigan, as well as on this ball against Arizona …

But, again, that’ll be more of a concern for Darnold’s coaches than his fantasy owners.

Finally, although his rushing production fell way off in his 2nd season, Darnold showed over the past 2 years that his mobility can do more than just move him around the pocket. He’s capable of adding some ground stats in the NFL.

NFL.com’s Lance Zierlein likens Darnold to Andrew Luck. WalterFootball.com’s Charlie Campbell picks Philip Rivers. I don’t think Darnold sports quite as much arm as Luck, but I see that comp more than Rivers because of the mobility.

This year’s QBs look tightly packed up top, and you’ll find the names shuffled depending on which draftnik’s rankings you’re checking. I won’t pretend to know who’ll enjoy a better pro career between Darnold and Josh Rosen. If I could accurately determine that, I’d probably have a much more lucrative and stressful job. Darnold clearly isn’t as clean a prospect on the field than Rosen, for what that’s worth.

I do believe the Trojan beats the Bruin in fantasy outlook, though, because of the displayed ability and willingness to run the ball. Landing spot will matter, because I think Darnold’s flaws could become issues if he's surrounded by poor pass protection and iffy receivers.