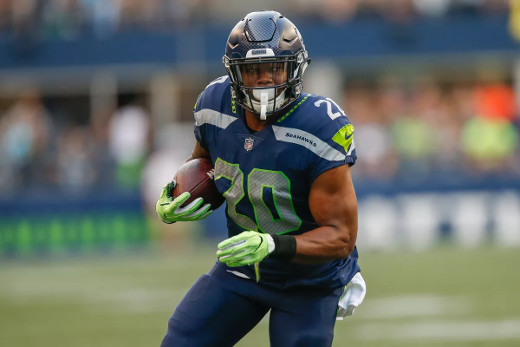 A lot has happened since our 2019 rankings and projections were released a month ago. All 32 teams made it through their June minicamps. And we poured over 200 hours of research into our player profiles.

So the Draft Sharks staff recently got together to do a big update of the rankings. Let’s take a quick look at the most notable risers and fallers as we scream toward the start of training camps …

With Chris Carson sidelined after knee surgery, Penny turned in an impressive spring. The 2nd-year back has shed some pounds, now tipping the scales at 230. And he’s drawn praise from both coaches and fellow players.

We’re still projecting Carson to lead this backfield in touches and fantasy points. But with Mike Davis out of the way and the ‘Hawks expected to go run-heavy again in 2019, there’s plenty of room for Penny to beat his RB32 ADP. And if he passes Carson on the totem pole, Penny could flirt with RB1 production.

Conventional wisdom has rookie Miles Sanders stepping right in as Philly’s lead back. Not so fast. Eagles insider Zack Rosenblatt wrote earlier this month that it’d be “premature” to expect the rookie to climb right to the top of the depth chart. It certainly doesn’t help that Sanders missed all of OTAs and minicamp with a lingering hamstring injury.

Howard, meanwhile, has impressed his new team this spring — specifically with his pass-catching ability.

“I feel like they’re allowing me to do more, show my game off more instead of just being one-dimensional like Chicago had me,” Howard said in early June.

The former Bear will head to training camp with a fair shot to open the season as Philly’s lead back.

Like the 2 guys above him on this list, Harris has benefitted from an injury to a backfield mate. Sony Michel had his knee scoped this offseason and missed OTAs and minicamp.

Harris reportedly capitalized with a strong spring. The Athletic’s Jeff Howe wrote earlier this month that the 3rd-round rookie has a shot to claim a “prominent role” this season. And we know this New England backfield is a bountiful source of fantasy points. The Pats have ranked top 10 in rushing yards and TDs in 3 straight seasons.

Hill’s status is a bit clearer now than it was when we released our rankings.

We learned that he won’t face legal charges in connection with his son ending up with a broken arm. The NFL Network’s Tom Pelissero then reported that Hill is still a part of the Chiefs’ plans and is expected back with the team for the start of training camp.

None of that means he’ll escape without a suspension. In fact, we’re still expecting one. But we bumped Hill’s projections from 8 games to 12 — and he now sits inside our top 20 WRs.

Hill met with the NFL this week, which hopefully means we’ll know exactly how many games we’ll get from him by the time we get into the heart of fantasy-drafting season.

We weren’t sure what to make of Kirk in new HC Kliff Kingsbury’s offense after the Cardinals added 3 WRs in this year’s draft. But the buzz from Arizona this spring is that Kirk has been the team’s most impressive receiver.

That shouldn’t come as a surprise. Kirk looked like an excellent prospect coming out of Texas A&M. And he turned in a sneaky-good rookie campaign, posting a 43-590-3 line in 12 games on a bad Cardinals offense.

The offense should be significantly better in 2019 with the arrivals of Kingsbury and QB Kyler Murray. That makes Kirk a candidate for a big 2nd-year leap.

“I think Marquez has had a fantastic spring and really stepped up as a guy who can be an every-down player.”

That was QB Aaron Rodgers talking in early June about a guy he reportedly didn’t trust last year.

We’re not counting out James Washington in this battle. But for now, Moncrief is the Steelers WR to target late in drafts.

Rudolph’s standing with the Vikings looked shaky a month ago. He was the subject of trade rumors all winter and then watched his team spend a 2nd-round pick on Alabama TE Irv Smith.

But Minnesota handed Rudolph a 4-year, $36 million extension earlier this month. We’ll see whether he plays out the entire contract, but it at least means he remains a big part of the Vikings’ plans in 2019.

Smith remains a threat to steal some targets, but Rudolph is back in the low-end TE1 mix.

Word out of Steelers camp is that we’ll see more of a committee backfield this season, with both Jaylen Samuels and rookie Benny Snell cutting into Conner’s workload. The team experimented with 2-RB sets this spring. And Conner came right out and said that he expects the backfield touches to be “spread out pretty evenly” this season.

It’ll be a situation to monitor closely when we get into training camp and preseason. For now, we’ve shaved about 20 touches from Conner’s original projection. But he still sits safely in RB1 territory.

But the surgery is another addition to Michel’s lengthy injury history. He tore his ACL in high school, had knee surgery last August and missed 2 games with knee trouble as a rookie. He also has shoulder, ankle and forearm injuries on his resume.

We saw Michel’s upside over his final 9 games (including playoffs) last year, when he averaged 90.4 rushing yards and .9 TDs per contest. But between his durability problems, the addition of Damien Harris and the general unpredictability of New England’s backfield, Michel is a risky pick at his 5th-round ADP.

A bum hamstring had him sidelined all spring. The injury isn’t believed to be serious, but the missed practice reps aren’t ideal for the rookie.

Sanders still has time to carve out a significant early-season role. And his ADP has dropped into the 8th round. He’s a fine shot to take in that range — but we’ll be keeping a close eye on his health and role when training camp gets underway.

Washington was mostly disappointing as a rookie and was reportedly out-played by Donte Moncrief this spring.

We’re not writing off a guy we really liked coming out of Oklahoma State last year. But Washington is no more than an end-of-draft flier right now.

Herndon has a shot to produce as a TE1 when he’s on the field this year, but a 2-game ban would make him tough to draft-and-stash in standard-sized fantasy leagues.