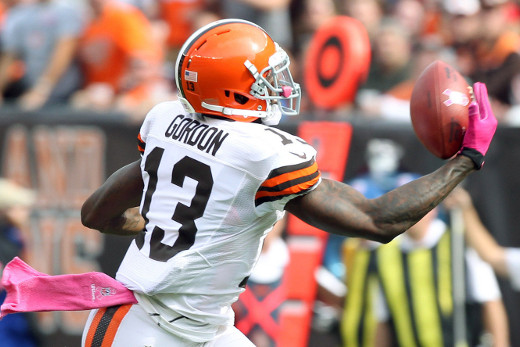 The biggest ADP mover over the past 2 weeks? No surprise: Browns WR Josh Gordon, who was reinstated (and suspended 4 games) on July 25.

Gordon was just a late-round flier before that news, with an ADP in the 17th round. That’s vaulted all the way into the 7th over the last few days of July. Teammate Corey Coleman’s price tag, meanwhile, has dropped from the late 6th round to the early 8th.

Let’s check out those guys and the rest of the biggest ADP risers and fallers at the end of July.

Fitzpatrick’s ADP climb might not be done yet, just 5 days after he re-signed. But he still represents nice value right now as the 22nd QB off the board. He sits 3 spots higher in our rankings.

Le’Veon Bell’s suspension has boosted Williams into the middle of the 7th round. That’s a fair price for a guy who should produce RB1 numbers over the first 4 games and then be a high-upside handcuff the rest of the way.

Foster is now going just 2 picks behind teammate Jay Ajayi. The veteran figures to pass the youngster in ADP before long. We’re not buying Foster at this price tag.

There’s been talk of a “timeshare system” in the Jets backfield this season. That’d feature Matt Forte and Powell, who is coming off a quasi-breakout 2015 season. He ranked 7th among RBs in PPR points from Week 11 to 16.

We highlighted Sproles as a strong value last week. Even at this elevated price tag, he’s a nice pick as the 51st RB off the board.

Gordon has been just the 40th WR off the board in recent drafts. That’s 8 spots lower than he sits in our PPR rankings and is a good price for a guy with massive upside. We’ll see if Gordon’s quad injury pushes him further down draft boards.

Dorsett was talked up throughout the spring, and the buzz has continued into the summer. That’s bumped his ADP up a round-and-a-half. He still makes sense as an upside bench stash as the 52nd WR off the board.

Ellington was also a “riser” in the mid-July ADP report. He climbed 4-and-a-half rounds over the course of the past month. The former 4th-round pick had a strong spring and might be the favorite for the #2 WR gig.

Boldin inked a 1-year deal with Detroit on July 26. The 35-year-old figures to slide in as the #3 WR and could be as low as 5th in line for targets.

Tye has been flying under the radar despite ranking 8th among TEs in PPR points over the 2nd half of the season. He remains a nice value at his 15th-round ADP.

Rodgers dropped weight this offseason and is getting a head start on Jared Cook, who’s still sidelined after June foot surgery.

Bell would make a lot of sense in the middle of the 2nd round if it was just the 4-game suspension we had to worry about. But last year’s knee injury adds considerable risk to his outlook. Bell was at least ready for the start of training camp.

Ajayi’s ADP has sunk over 2 full rounds since Miami added Arian Foster. The new teammates are now going within 2 picks of each other. We’d much rather own Ajayi, who was a production machine in college and has much fresher legs. We’ll see about the knee issue that kept him out of practice on the 1st day of August.

The rookie went down with a sprained MCL on July 28 and could be sidelined for a couple of weeks. That hurts his chances of carving out an early-season role. Dixon is still a nice bench stash who could emerge as Baltimore’s lead back at some point this year.

Williams also appeared in our mid-July ADP report. He dropped more than 2 rounds over the first 2 weeks of the month and another 6-and-a-half over the final 2 weeks. We actually like him at this dirt-cheap price, especially in best-ball leagues. He’s suspended 4 games and still needs to get in shape, but Williams could be an asset over the 2nd half of the season.

Drake’s no higher than 3rd on Miami’s depth chart but is behind a couple of guys in Jay Ajayi and Arian Foster with plenty of injury history. The rookie could still make an impact this season but is tough to roster outside of super deep leagues.

Volume was the biggest thing working in Coleman’s favor this season. That took a significant hit with the return of WR Josh Gordon. Coleman has recently been the 42nd WR off the board, on average. That’s 2 spots lower than he sits in our PPR rankings.

Perhaps the arrival of Andre Johnson is a bad sign of Green-Beckham, who had a disappointing spring. But if he can’t beat out the 35-year-old, he’s not ready to be a fantasy factor anyway. DGB showed up to training camp in good shape.

Still recovering from last year’s torn Achilles, Smith opened training camp on the active/PUP list. We’re rooting for a successful comeback, but he shouldn’t be drafted as more than a bench stash.

An Achilles issue that cost Doctson time this spring landed him on the PUP list to begin training camp. The rookie is missing valuable reps and isn’t expected to open the season higher than 4th on the depth chart.

Jaelen Strong has been the star of Houston’s offseason so far and might be the favorite for the #2 WR job. Fuller won’t be a fantasy option if he’s 3rd or lower on the depth chart in a run-heavy offense.

Perriman started camp on the PUP list but is expected to be ready by Week 1. That makes him worth a shot at this depressed price tag. Perriman is the most physically gifted WR in Baltimore and has the highest fantasy ceiling of the group.

Janis’ monster playoff performance last year is getting smaller and smaller in the rearview mirror. He hasn’t generated any hype early in training camp but remains in the mix for the #3 WR spot.

Cook remains sidelined after undergoing June foot surgery and has no timetable for return. He needs to get on the field soon if he wants to make an early-season impact with his new team. 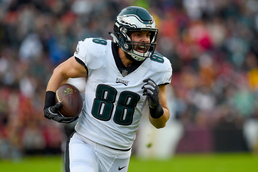 A quick recap of the 17 players who moved up or down the Draft Sharks rankings over the past week.