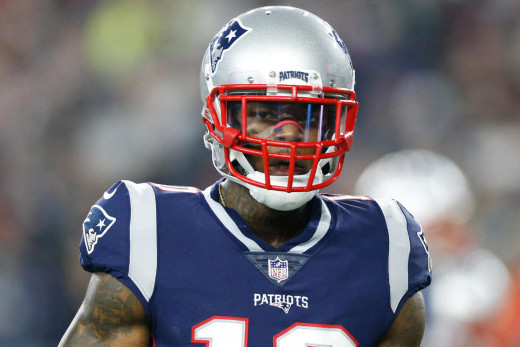 How much risk is too much risk for 1 fantasy roster? We’re putting that question to the test with this squad.

This is a $35 FFPC best-ball league. (You can check out the full FFPC rules here, but the 2 key points are 1.5 PPR for TEs and 2 flex spots.) Winner nabs $300, 2nd place gets a $35 FFPC credit and everyone else goes home empty handed.

So, as the great Ricky Bobby once said, “If you ain’t first, you’re last.” This team could definitely finish last. But it also has the firepower to take 1st if things break right.

Here’s a pick-by-pick recap of our draft from the 10-hole. I’ve also included some “ADP Notes” on guys who are climbing or falling down draft boards.

Picking 10th, we were hoping to leave the first 2 rounds with an elite WR and an elite RB. Joe Mixon, James Conner, Todd Gurley and Dalvin Cook were still on the board at this point. So we locked up Jones — our top-ranked WR — and bet on at least 1 of those RBs making it back to us in Round 2.

Cook was available here, too. But Mixon gets the nod because he’s shown the ability to hold up with big NFL workloads. Oh — we also had this run dancing through our heads.

ADP Note: Lions RB Kerryon Johnson came off the board at 2.11.

Melvin Gordon was easily atop the MVP Board here. But we were genuinely curious just how far he’d fall.

So we passed for a guy in Williams that we don’t have much exposure to. In fact, we’ve spent much of the summer bashing him at ADP. But we got him a full round after ADP here, negating quite a bit of risk. Remember that HC Andy Reid has produced a top-16 PPR RB in 16 of his 20 seasons as an NFL HC.

So we still don’t know how far Gordon would have fell had we not taken him. We just couldn’t pass up the potential for huge profit here.

It’s certainly possible that Gordon’s holdout extends into the regular season. But he’s also a good bet for 1st-round production if he shows by Week 1. He’s finished as a top 8 PPR RB in 3 straight seasons.

We were hoping to land D.J. Moore or Tyler Boyd here, but they both went earlier in the round. So we continued to stockpile our RB room with White, who ranked 7th at the position in FFPC points last year.

Note that we wouldn’t have made this pick in a league that doesn’t allow you to start 4 RBs in a given week.

We still weren’t excited by anything available at WR. So we went with a TE that we’re definitely excited about. McDonald finished 10th among TEs in this scoring format last year and now finds 207 targets left behind by Antonio Brown and Jesse James.

Four more TEs came off the board between our 6th- and 7th-round picks, which made us feel even better about this selection.

The MVP Board was screaming at us to take Watson here. We obliged.

Only Patrick Mahomes has averaged more fantasy points per game than Watson over the past 2 seasons. We got Watson here about 4.5 rounds after Mahomes. And we started a mini QB run, with 6 signal-callers coming off the board over the next 18 picks.

Our other consideration here was A.J. Green, who ended up going at 7.11. We passed because we wanted our WR2 on the field to start the season.

Here’s where this squad starts getting really interesting. After waiting until Round 8 for our WR2, we were hoping to land a safe player with a high weekly floor. Jarvis Landry was in our crosshairs, but he went at 8.01. Corey Davis was also in consideration.

But we ended up deciding between Watkins and Josh Gordon. And Watkins got the nod as the safe-er player. He remains locked in as the #2 WR on the game’s most explosive offense and scored as the PPR WR24 in his 8 healthy games last season.

ADP Note: Ravens rookie RB Justice Hill came off the board at 8.08. That’s the earliest we’ve seen him go — although he does usually seem to get picked 3-4 rounds before we’d consider him.

Again, the prudent move might have been to go with some safety. But we couldn’t pass on Flash after strongly considering him in the 8th round.

Despite joining the Patriots in the middle of last season, Gordon scored as the PPR WR28 from Week 4 to 15. And here’s the most exciting part: In his 3 games without Rob Gronkowski, Gordon averaged 9.3 targets, 4.3 catches, 104 yards and .7 TDs.

Another risky pick? Sure. But Gordon boasts league-winning upside as a 9th-rounder.

We like locking up 2 of our top 14 TEs in this TE-premium format. With only Reed and Kyle Rudolph remaining from that group, we snagged the oft-injured but still-productive Redskin. Reed ranked 13th among TEs in this scoring format last year, despite missing 3 games.

ADP Notes: Two buzzy rookies were picked in this round — Tony Pollard at 10.04 and Darwin Thompson at 10.12.

Marquez Valdes-Scantling is the more exciting Packers WR and sits ahead of Allison in our rankings. But Allison, playing mostly in the slot, could finish the season with more catches. And we got him 4 rounds after MVS.

With 22 QBs off the board, it was time for us to secure a backup to Deshaun Watson.

Antonio Brown’s antics have put a bit of a damper on Carr’s outlook. But, at minimum, he’s a strong bet to improve upon last year’s career-low 3.4% TD rate.

You’ll find him on pretty much every Draft Sharks roster. Sanu has finished 30th and 31st among WRs in FFPC points over the past 2 seasons. We got him here as the 55th WR off the board.

Campbell is still sidelined with his hamstring injury. And Andrew Luck’s calf/ankle injury is also a concern.

But that stuff is baked into Campbell’s price tag here, which is 4-5 rounds later than he was going a few weeks ago. We still like his odds to emerge as Indy’s #3 WR by October.

ADP Note: Dare Ogunbowale sighting! The Bucs’ supposed #3 RB came off the board at 15.09.

We’ll often roll with just 2 QBs in these FFPC best balls. But Mariota presented too much value at this point. Even in a disappointing 2018 campaign, he finished as a top-12 QB in 4 different weeks.

We got Witten here as the 28th TE off the board. He checks in at TE23 in our FFPC rankings.

As always, we’re looking to secure 3 Ks and 3 DSTs in these 28-round best balls. At K, especially, you need to be willing to burn 3 picks earlier than you’d like to make sure to land 3 starters.

Confession: We screwed up at the 19th/20th round turn. We were targeting Rams RB Malcolm Brown but completely overlooked the fact that team #12 had Todd Gurley. He wisely snagged Brown at 20.01.

Gore will probably have more standalone value than Brown. But the Ram brings the upside if Todd Gurley’s knee gives him more trouble.

We were happy to land Watson, who should step in as New England’s lead TE after his 4-game suspension, and Goodwin, who appears locked in as 1 of San Francisco’s starters to open the year.

He never fired in Kansas City but has been running with the Jags’ 1st-team offense throughout training camp. Conley’s 97th percentile SPARQ score hints at some untapped upside for the 26-year-old.

The former 1st-rounder flashed down the stretch in Cleveland last year, tallying 259 yards and 2 scores over the final 5 games. Now he’s on track to serve as the #3 WR for a Bucs passing game that might be 1 of the most productive in the league. 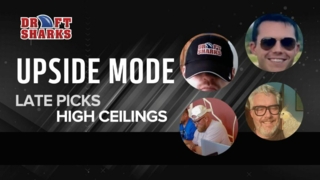 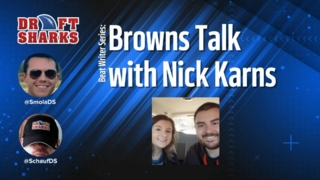 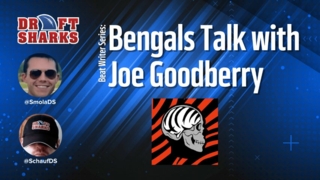