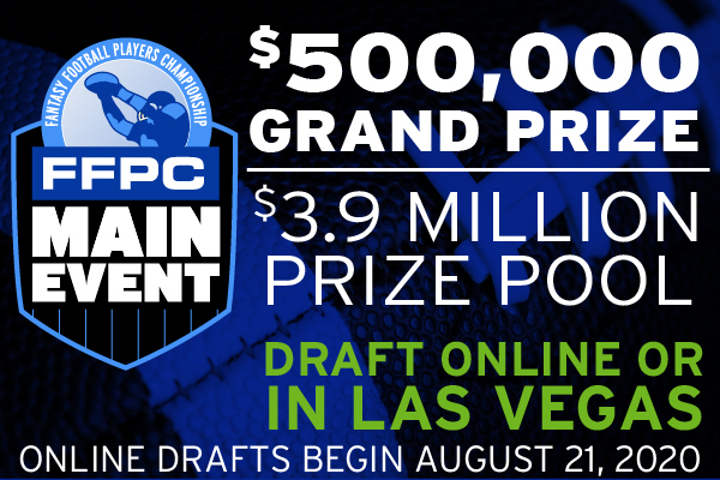 Editor's Note: This article originally appeared in the Rise or Fall Draft Guide.

I’ve been playing in high-stakes leagues for 7 years now. Without a doubt, the home for high-stakes fantasy is the Fantasy Football Players Championship.

I started playing in the Main Event 7 years ago and have cashed every year but one. 2019 was a real coming-out party for me, finishing 5th overall in the event and hitting a pretty nice pay day of $15,500, including league prizes. I played in 3 Main Event Leagues in 2019, winning $17,500 total.

I’ll be doing a few more Main Event leagues in 2020, naturally. In this series, I’ll discuss some strategies that have helped me attack this high-stakes competition.

How the Main Event works

You must first know the rules for this unique competition. The Main Event consists of 3,000 teams -- that’s 250 leagues of 12. You play every team in your league in Weeks 1-11. Your league playoffs start Week 12, with 4 teams qualifying. There are cash prizes awarded to the team with the best regular season record, most points, playoff winners and for finishing 2nd or 3rd in the playoffs. The top 2 regular season teams and playoff league winner will make it to the all important “Championship Round” to compete for the $500,000. The Championship Round is a total points competition running from Week 14-16 and paying out down to 125th place.

The FFPC also offers unique scoring and roster requirements. The biggest difference is the TE premium scoring. TEs get 1.5 points per reception while all other positions get 1 PPR. It doesn’t seem like a big deal, but it is. The multi-flex option for setting a lineup is also a bit unique. View the full rules here.

You must be at your absolute best when drafting against these sharks. Nobody is spending $1,800 and drafting from rankings off a magazine printed 3 months prior. Don’t be scared… just be prepared. Most sites that offer mock drafts like Fantasy Football Calculator, Yahoo and ESPN will not be able to help you due to the unique scoring and roster requirements of the FFPC, so mock drafts can be hard to come by. Luckily, you can use the Draft Sharks Mock Draft Trainer to practice with the FFPC rules.

As mentioned previously, the biggest difference and FFPC’s claim to fame is the TE premium scoring. The 1.5 PPR for TEs really moves them up the draft board. We’ll cover when to target certain players/positions in future installments, but it’s very common to see a TE or two get drafted in Round 1.

The Main Event also has a 20-man roster -- 18 offensive players with a kicker and a defense. Starting requirements are as follows:

The 2 flex spots add a little more strategy and variance to drafts. Getting the most points you can in those flex spots is key to winning big money in the Main Event.

The best prep you can do to get ready for the Main Event is to DRAFT…DRAFT…DRAFT. Beyond the Mock Draft Trainer, the FFPC offers a mid-stakes event called the Football Guys Players Championship. The drafts run from late April all the way up to the week that the NFL season starts. Each league is $350, and you can enter as many as you want. Now, it’s expensive prep work and practice, but nothing will prepare you more for what it’s like to draft in the Main Event than drafting in these FBG drafts. Most of the Main Event players draft in multiple FBG drafts, so you will get a feel for where you can get your guys.

One of the things that has helped me the most is gathering all the info I can. I listen to 4-5 podcasts, including the High Stakes Fantasy Football Hour, Establish the Run, The Audible, Chasing the Helmet and, of course, any Draft Sharks podcast I can get my hands on. I listen religiously during the week to gather insight on players and analytics.

I also follow 10-15 people on Twitter that I really trust as far as providing actionable data. Here are some of the best:

These guys give great insight for draft prep and weekly start/sit decisions. I don’t necessarily let these pods or analysts tell me who to take ... I just want all the info I can so that I can make the most informed decision.

Every team that registers for the Main Event by July 27th will receive their draft position by August 2nd. This gives you about a month to strategize before the draft. Maybe you want one of those elite TEs early in the draft (one of my preferred methods); maybe you have an early 1st-round pick and want to take a stud RB and go best-player-available after that; or maybe you want to load up on WRs early.

Remember your draft spot does not determine your success. In one Main Event league last year, I had the first pick and took Saquon Barkley. He got hurt, of course, missed a month and killed my chances at real money. In another draft I picked 3rd, took Christian McCaffery and won $15K. Draft spot doesn’t matter for success, but it will impact your draft strategy.

In the next installment of this FFPC strategy guide, I’ll discuss how to build a championship-winning foundation in the early part of the draft.